Patrick Murphy, a first year Master of Public Health student, began his academic career in public health at Saint Louis University's campus in Madrid, Spain. He completed his first two years at SLU-Madrid, and after transferring to the St. Louis campus, applied to the Accelerated MPH Program.

In the accelerated program, he was able to begin his graduate courses during his senior year, and will complete the MPH program in only one additional year. He is currently involved with faculty research, as well as the Center for Social Action on SLU’s North Campus. 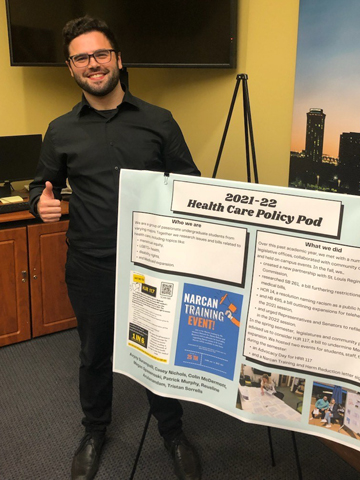 “The Center for Social Action works to encourage lifelong personal and social responsibility by transforming student volunteers into effective servant leaders and advocates for social justice.  One way to start is by engaging in advocacy and social action through one of the many programs offered by the Center such as Policy Pods,” according to the Center for Social Action’s website.

Policy Pods are small groups of students that engage in legislative research and meetings. Participants meet weekly on topics such as criminal-justice reform, immigration reform, the environment, education immigration, disability rights and others. Near the end of each semester, the groups set up legislative meetings in the district to advocate on their position and also will host an event to educate the campus. Starting each year, groups meet with advocacy agencies to get information on their topics and celebrate at the end of the year with a keynote address.

Murphy is one of two student leaders for this year’s ‘Healthcare Policy Pod,’ which focuses on health policy. He shares that, typically, pods select one or two bills, and work with local legislators to either advocate for or against the selected bills at the state level. The bills selected in this year’s healthcare policy pod are one that focuses on reducing the price-cap of insulin, and another for a pilot program with the state of Missouri for the production and distribution of fentanyl test strips.

Murphy describes a typical policy pod meeting as consisting of creating fact sheets, emailing legislators, and drafting emails to request meetings with policy makers. This year, the healthcare pod has focused on harm reduction and narcan training. The pod has also established partnerships with ‘NoMODeaths,’ a harm reduction organization that received a grant from the State of Missouri that came from opioid settlements, and the St. Louis Regional Health Commission. Together, they work to create programming and events to promote health education.

In previous years, Murphy shared that some pods had advocacy visits, where students would visit the Missouri general assembly to meet with policy makers and advocate for specific bills during the current legislative session. He adds that part of their call to social action is not only to advocate for policies that will overall benefit the community, but also to advocate against policies that could have the potential to cause harm or negatively impact the overall community.

“After Medicaid expansion in Missouri passed last year, there have been many proposed bills to attempt to defund Medicaid expansion. There was one particular joint resolution that proposed an amendment to the Missouri Constitution that would have essentially defunded Medicaid expansion, and we took it upon ourselves to host a ‘call-in day’ on North Campus, during which we tabled along West Pine and invited campus members to call or email legislators to express opposition to this change,” Murphy said.

When asked why policy and advocacy are important aspects of public health, Murphy shared that, “Policy is what decides who gets access to healthcare, what groups are being prioritized in terms of health. To me, it is the best tool to improve structural differences that have led to institutional and structural racism in our society. It is not the end all be all to solving all of the problems in the world, but it is a very important aspect of making the structural change that we need to see in our state.”

The Saint Louis University College for Public Health and Social Justice is the only academic unit of its kind, studying social, environmental and physical influences that together determine the health and well-being of people and communities. It also is the only accredited school or college of public health among nearly 250 Catholic institutions of higher education in the United States. Guided by a mission of social justice and focus on finding innovative and collaborative solutions for complex health problems, the college offers nationally recognized programs in public health and health administration.