Missouri’s Attorney General, Republican Eric Schmitt, appears to be the clear frontrunner in Missouri’s U.S. Senate race, according to our August 2022 SLU/YouGov Poll. Schmitt leads Democrat Trudy Busch Valentine 49.3% to 37.6% with “other” receiving 5.4% and 7.7% saying they are “not sure”. However, with well over two months before election day, November 8th, it is too early to tell whether Schmitt has a lock on this race. 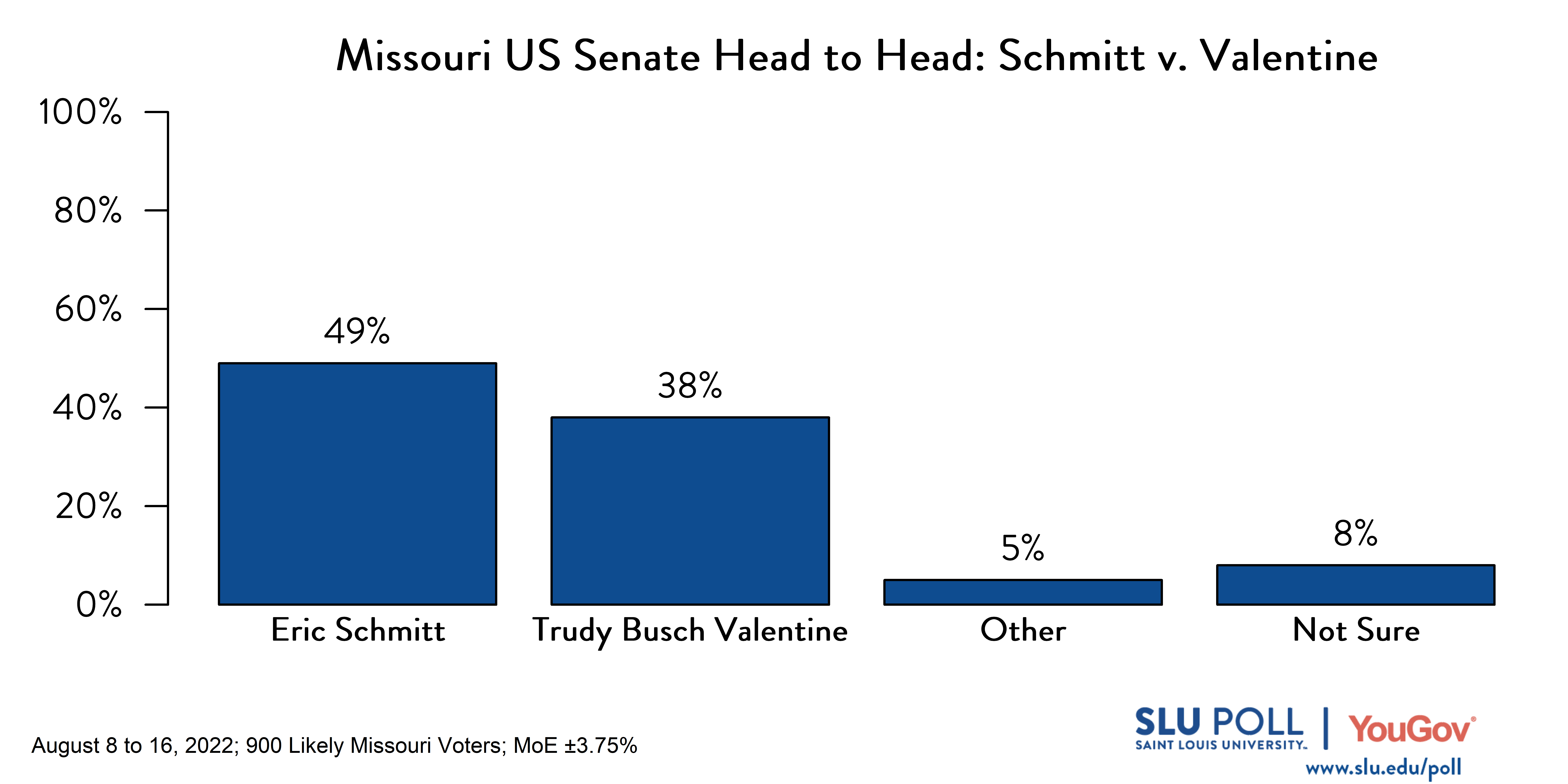 Given the political climate in Missouri, it seems that Schmitt would have a hard time losing. Missouri, once known as the America’s best bellwether state during the 20th century, has quickly turned from purple to red. Although going into the 2016 election cycle Democrats in Missouri controlled all statewide offices except the Lt. Governor’s seat, as well as one U.S. Senate seat held by Claire McCaskill, Trump won the 2016 presidential election in Missouri by 18.5%. He had long coattails and allowed Republicans to win all statewide races, turning Missouri from red to dark red. It has stayed dark red since, thus making political analysts think that in today’s political climate in Missouri a Democratic candidate stands no realistic chance of winning the U.S. Senate seat being vacated by retiring U.S. Senator, Roy Blunt. Also, we cannot ignore that former President Donald Trump is still very popular in Missouri. We would expect him to endorse and possibly make a campaign appearance for Schmitt, likely increasing Schmitt’s chances of electoral success on November 8th.

But former U.S. Senator John Danforth had thrown a heavy monkey wrench into this race. Unhappy with the extremism he sees in the Democratic and Republican parties, he arranged to place an Independent candidate into the race. Normally, Independent candidates do not impact races because they usually only win a tiny fraction of the total vote. However, Danforth had promised to back Wood with a $20 million dollar war chest. John Wood, with reasonable credentials and likely appeal, may have become a major spoiler. Our SLU/YouGov Poll suggests that this might have been the case because we asked Missouri likely voters who they would vote for after adding Wood to the race. Wood garnered 9.9% of the vote. This is not an insignificant percentage for a relatively unknown candidate just starting his campaign with $20 million of Danforth money behind him and Wood commercials starting to blitz the airwaves. 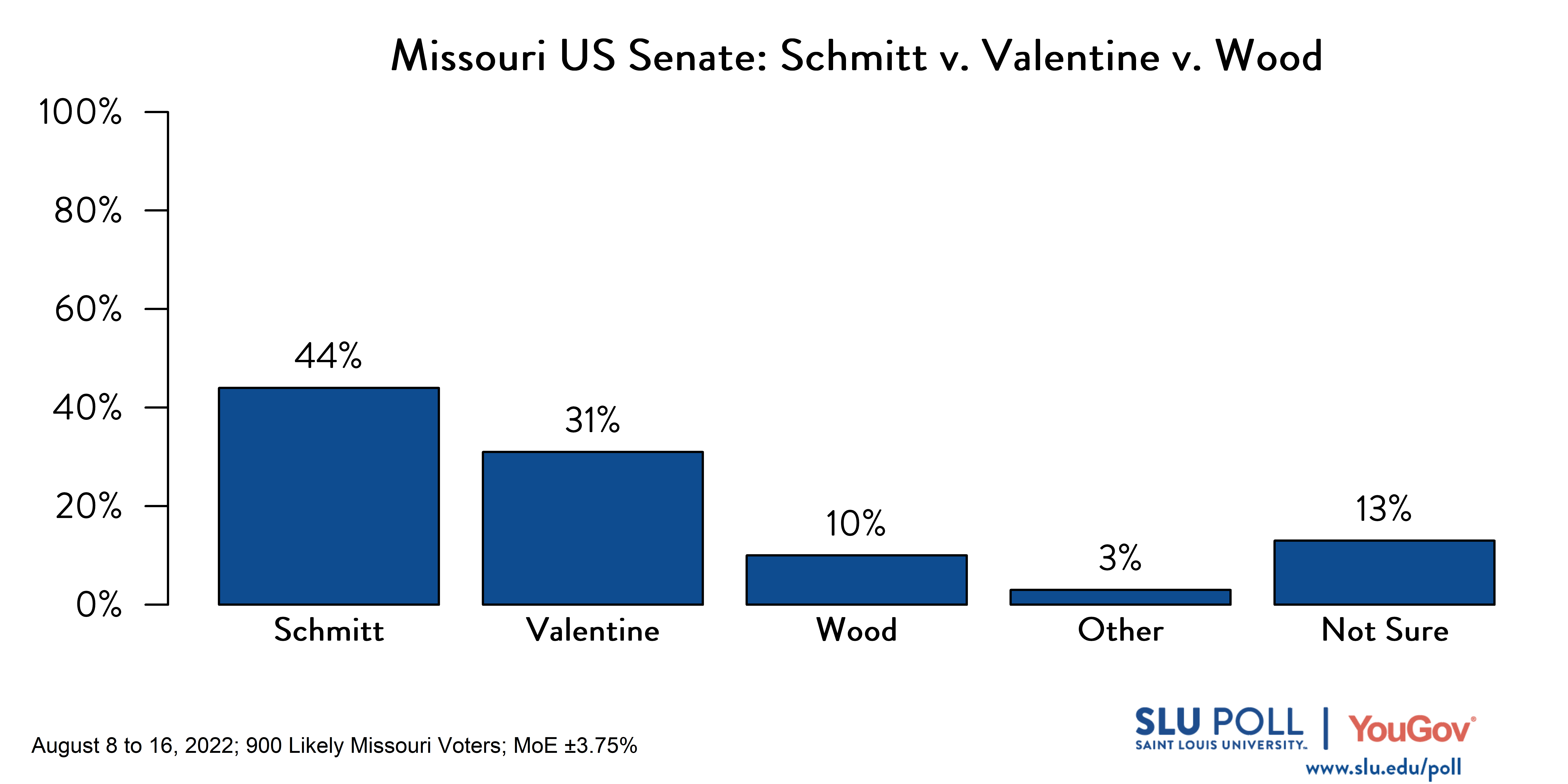 But as this analysis of the Missouri Senate race was being written, Wood suddenly and surprisingly dropped out of the race. Rumblings behind the scene, especially among Republican insiders, was that Wood was in the race to eliminate vulnerable, scandal-ridden Eric Greitens, if he had won the Republican Primary. Thus, Republican insiders assert that Wood would not continue to run after the primary since Greitens lost. It was speculated that if Wood continued to run, he could possibly cost Missouri a Republican U.S. Senate seat by splitting the Republican vote between Schmitt and himself (Wood is a Republican), causing Valentine to win.

But this is not totally credible because numerous and costly Wood commercials were running long after the August 2nd Republican Primary. The more credible argument is that internal Republican polls may have shown the same potential Wood strength as our SLU/YouGov Poll. This would have placed enormous pressure on Danforth to stop Wood from further campaigning because, if Wood became a viable candidate with further campaigning, he might have taken enough votes away from Schmitt, allowing Valentine to win. Republicans may have asked Danforth, “Do you want to be responsible for sending a Democrat, Trudy Bush Valentine, to the U.S. Senate?” As a lifelong Republican, Danforth would likely have answered, “No”, especially with Greitens now gone from the race.

With Wood now out of the race, it would be difficult to imagine Schmitt losing. Schmitt, despite his controversial status among even Republicans for filing numerous silly and frivolous lawsuits that have mostly gone nowhere, remains fairly popular. This division within the Republican Party over Schmitt’s antics may have made it difficult for him to win the Senate race if Wood had stayed in the race.

Our August, SLU/You Gov Poll shows Schmitt with a 11.7% lead over Valentine. This double-digit lead looks formidable against a candidate with no political experience, lacking a solid command of the issues, and not known as being a good speaker. However, she is an Anheuser-Busch beer heiress with endless money to spend on her campaign. She was successful spending her money in the primary to defeat Lucas Kunce, a more issue-oriented candidate who had campaigned hard for a year, but he could not compete with the Valentine money. Her money will no doubt help her in the General Election, but the National Republican Party will also be dumping a lot of money into keeping their Senate seat in Missouri. Recent polling in Senate battleground states has indicated that the battle for control of the U.S. Senate is tightening because Democrats have polled better against their Republican opponents than first expected. Consequently, Missouri is perceived as a state the Republican Party cannot afford to lose.

Valentine’s support comes mainly from the St. Louis and Kansas City metro areas where 46% and 46.5% respectively of likely voters said in our SLU/YouGov Poll that they would vote for her, although 42% and 38.9% respectively said they would vote for Schmitt. Although Schmitt is trailing by relatively small margins in Missouri’s two large metro areas, he more than makes up for this in Missouri’s rural areas where he is leading Valentine by very comfortable, double-digit margins. He leads Valentine by 25.9% in Northeast Missouri; by 16.7% in Northwest Missouri; by 30.5% in Southwest Missouri; and by 33.6% in Southeast Missouri. 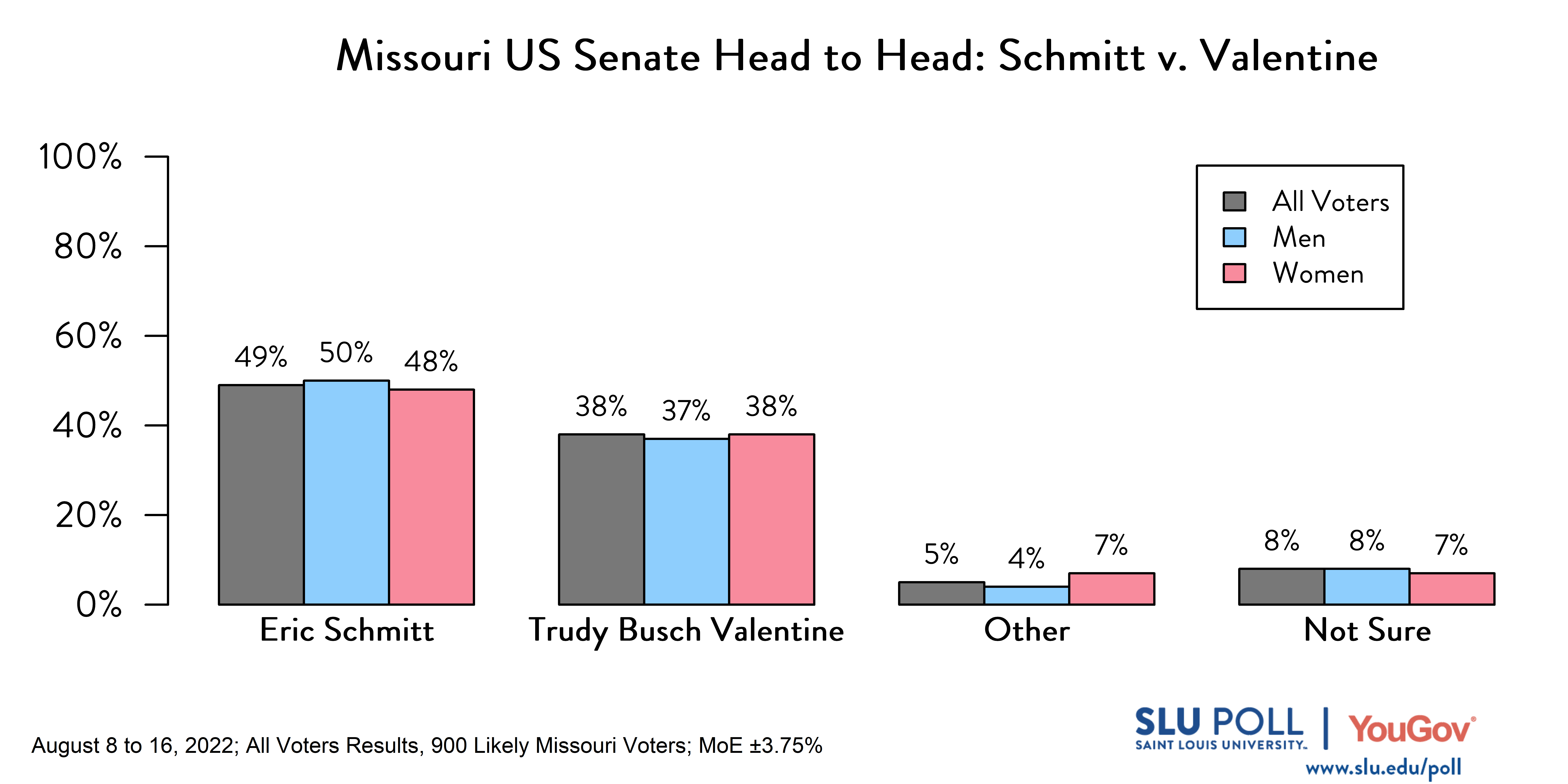 More women said they would vote for Schmitt than Valentine if the election were held today by a 48.3% to 37.8% margin, while more men also said they would vote for Schmitt over Valentine by a 50.5% to 37.3% margin. This statistic alone is tough poison to swallow for Valentine since Democratic candidates, especially female Democratic candidates, usually have a majority or plurality of female support. It is difficult to imagine how Valentine could possibly win this Senate race without at least a thin majority of women supporting her. 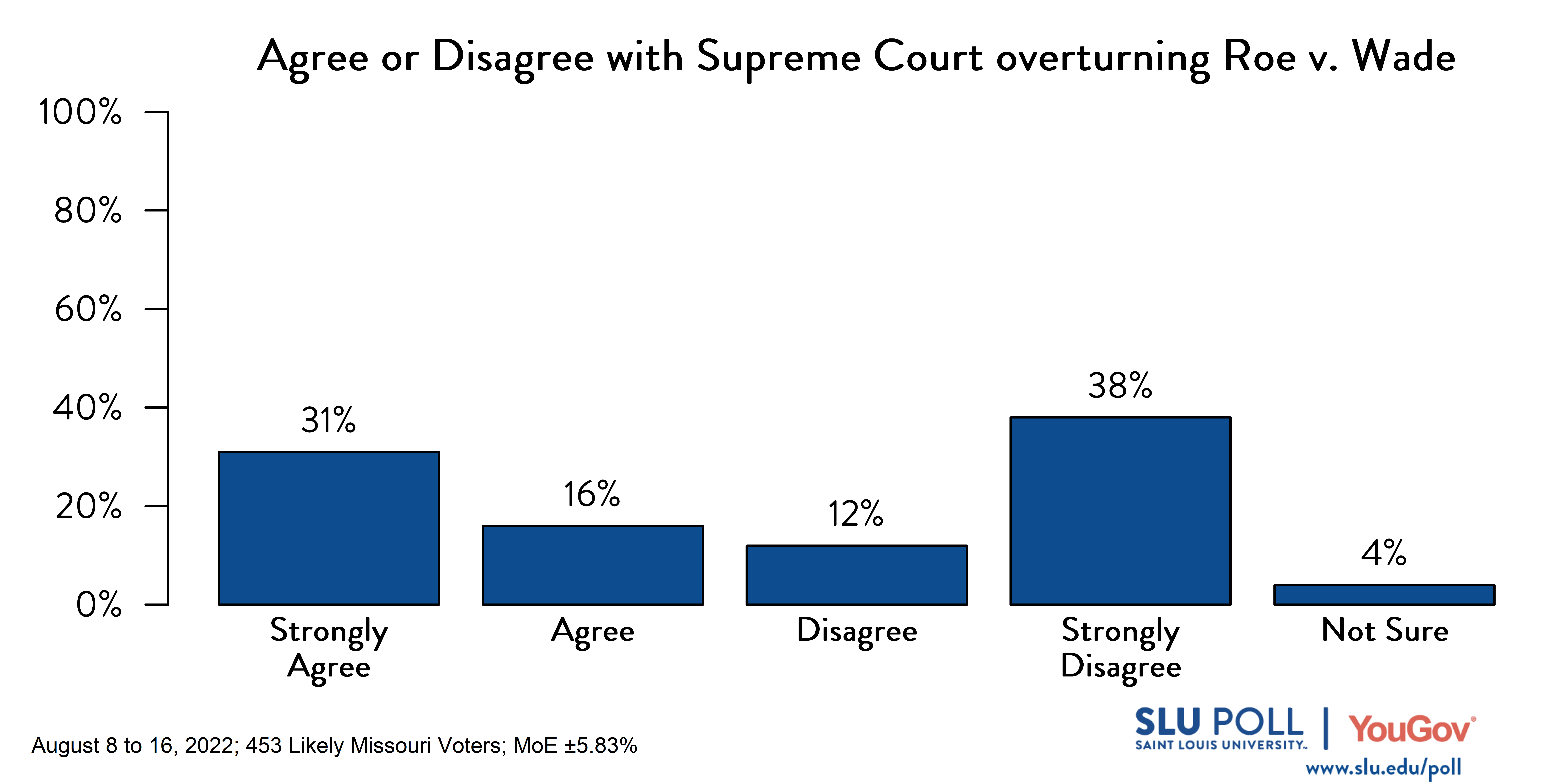 Democratic strategists have stressed that the Supreme Court’s overturning of Roe v. Wade in Dobbs v. Jackson Women’s Health Organization would give Democrats an issue they could use against Republican candidates to win races this election season. However, this issue is not playing very well for Valentine in Missouri because our SLU/YouGov Poll shows that Missouri’s likely voters are evenly split over whether they agree or disagree with the Supreme Court’s June decision overturning Roe v Wade with 46.6% agreeing and 49.6% disagreeing. In fact, the decision to reverse Roe v. Wade in Missouri seems to benefit Schmitt more than Valentine since those who strongly agree or agree with the Supreme Court’s decision are much more likely to support Schmitt than those who strongly disagree or disagree with the decision to support Valentine. This finding simply reinforces the steadfast electoral behavior reality that partisanship is a much greater determinant of vote choice than issues.

Given our analysis at this time, we see no viable path for Valentine to win. Eric Schmitt easily won his race for Attorney General in 2020, winning by a lopsided margin over Democratic candidate, Rich Finneran, 59.4% to 37.9%. Unless the prevailing winds shift dramatically in favor of Valentine, we see Schmitt coasting to an easy victory.