We found in our recent August, 2022 SLU/YouGov Poll that President Joe Biden, Governor Mike Parson, and U.S. Senators Roy Blunt and Josh Hawley, all received lower approval ratings  from Missouri likely voters than they did in our SLU/YouGov Poll taken in July, 2021. Parson dropped only marginally from 53% approval to 50% approval with his strongly approve percentage dropping from 13.9% to 10.7%. Yet, Parson remains relatively popular among Missouri likely voters compared to other elected officials in our poll. 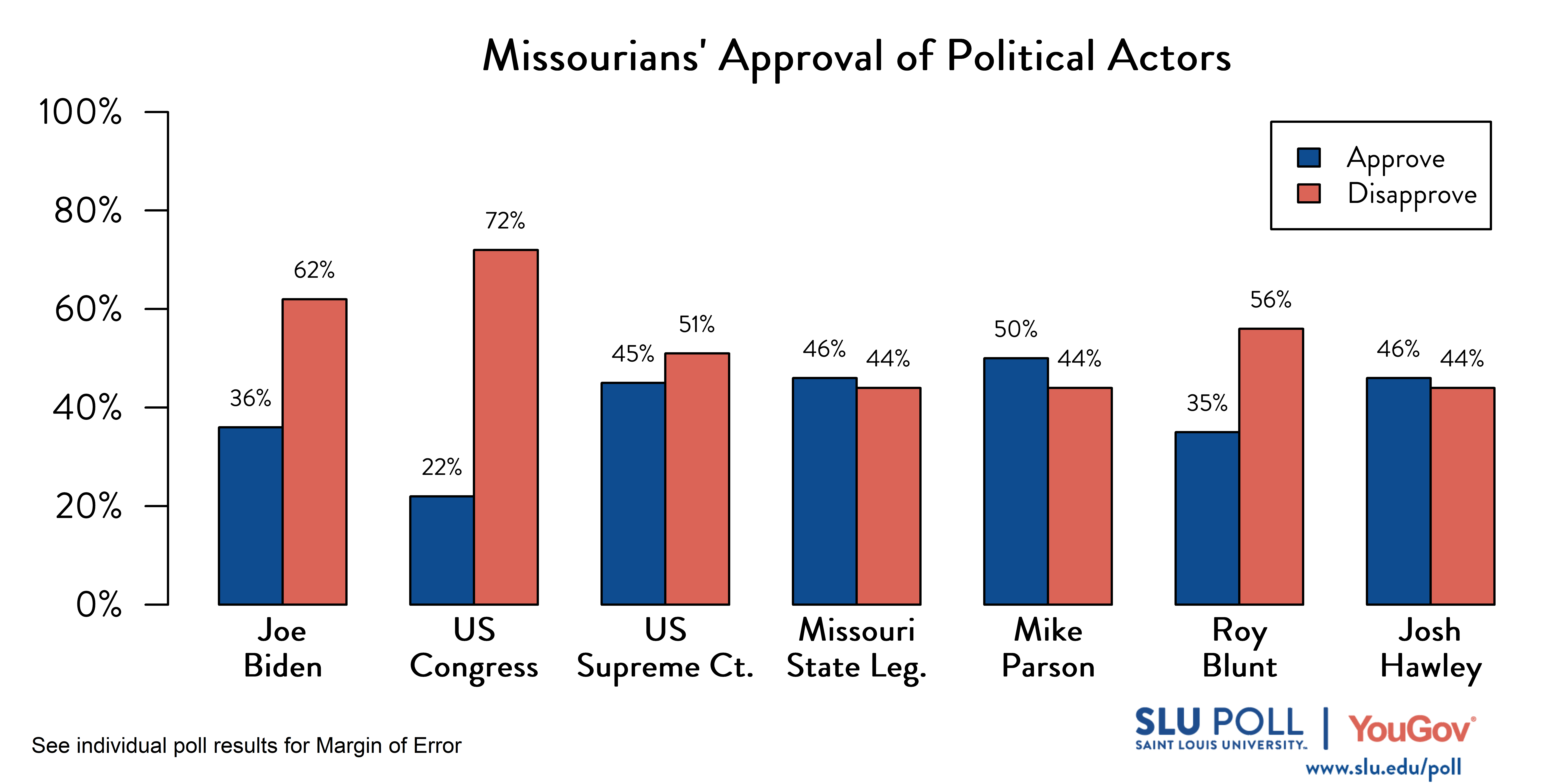 Senator Blunt’s approval score declined from 40% approval in our July, 2021 SLU/YouGov poll to 35% in our August, 2022 poll. Josh Hawley’s approval rating took a slightly bigger hit, dropping from 52% approval to 46%. We can speculate as to why Hawley’s approval ratings dropped among Missouri’s voters, but he has remained quite controversial nationally and in Missouri since he raised his fist in apparent support of the “insurrectionists” storming the Capitol on June 6th, 2021, and he has generally been supportive of Trump and his election challenges. Has this cost Hawley some support in Missouri? Maybe, but Hawley approval’s ratings are still healthy and higher than Blunt’s by 11%. Parson and Blunt have been less outspoken in support of Trump. In fact, Blunt even spoke out against Trump’s election challenges, although mildly. It is difficult to tell whether Trump is helping or hurting the popularity of Missouri’s top elected officials in Missouri, especially since Trump decided to not endorse any candidate in Missouri’s August U.S. Senate Republican primary, except to say he supports "Eric," but there were two prominent Eric’s running, Eric Greitens and Eric Schmitt. 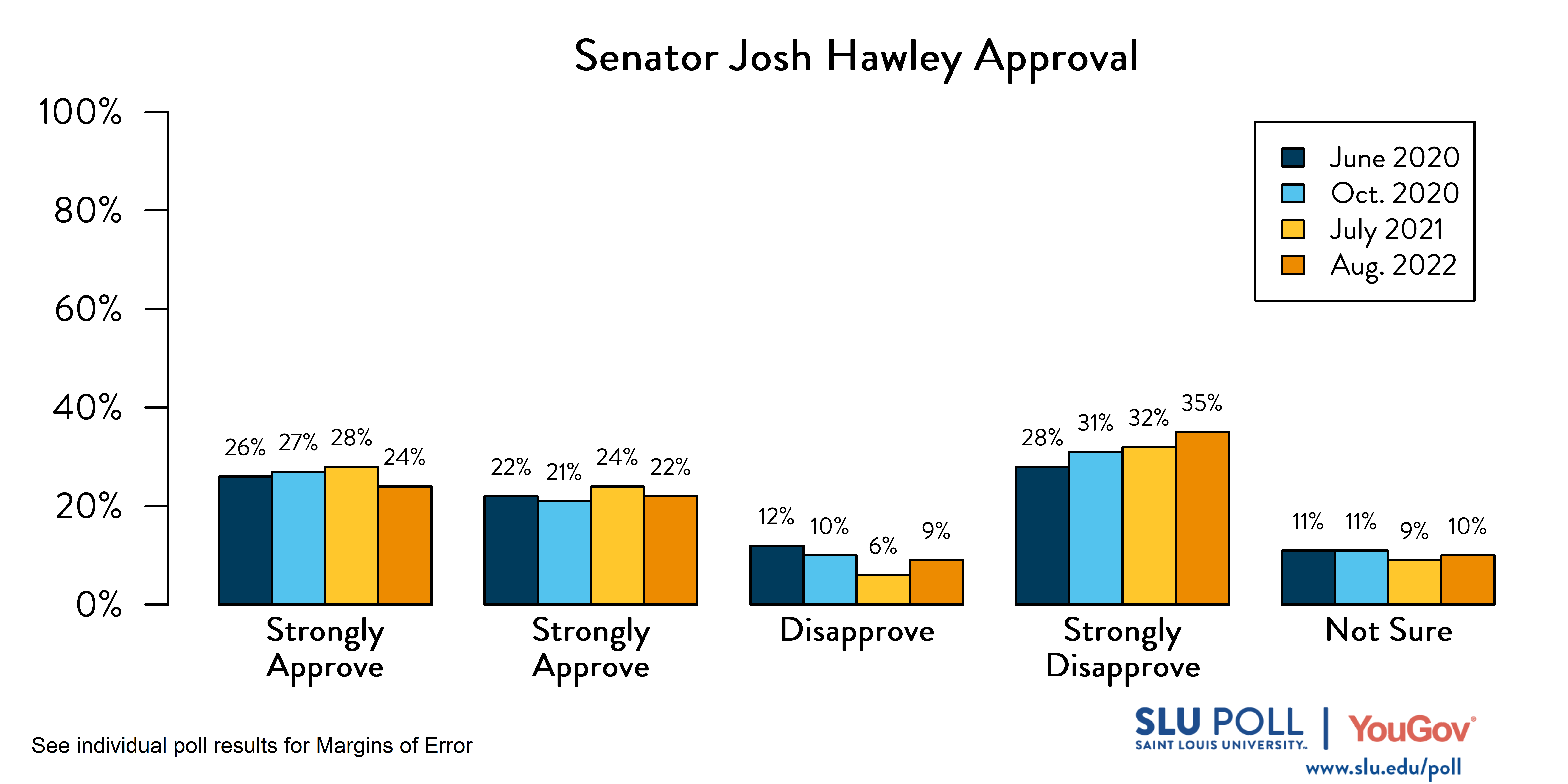 Although Missouri’s top elected officials lost voter support in our recent poll from last summer’s SLU/YouGov Poll, President Biden’s job approval percentage plummeted from 45% approval to only 36% approval or by 9%. This reflects a national downward trend for Biden who has seen his approval ratings from last summer slip from around 50% approval to about 40% this summer (Reuters/Ipsos tracking polls), although “red-state” Missouri voters have consistently given Biden less favorable approval ratings. A recent KRCG 13/SurveyUSA found only 32% of Missourians approved of Biden’s job performance with 50% saying they strongly disapproved. Biden’s job approval percentage was 4% higher in our SLU/YouGov Poll, but the strongly disapprove percentage was identical to the KRCG/SurveyUSA percentage. 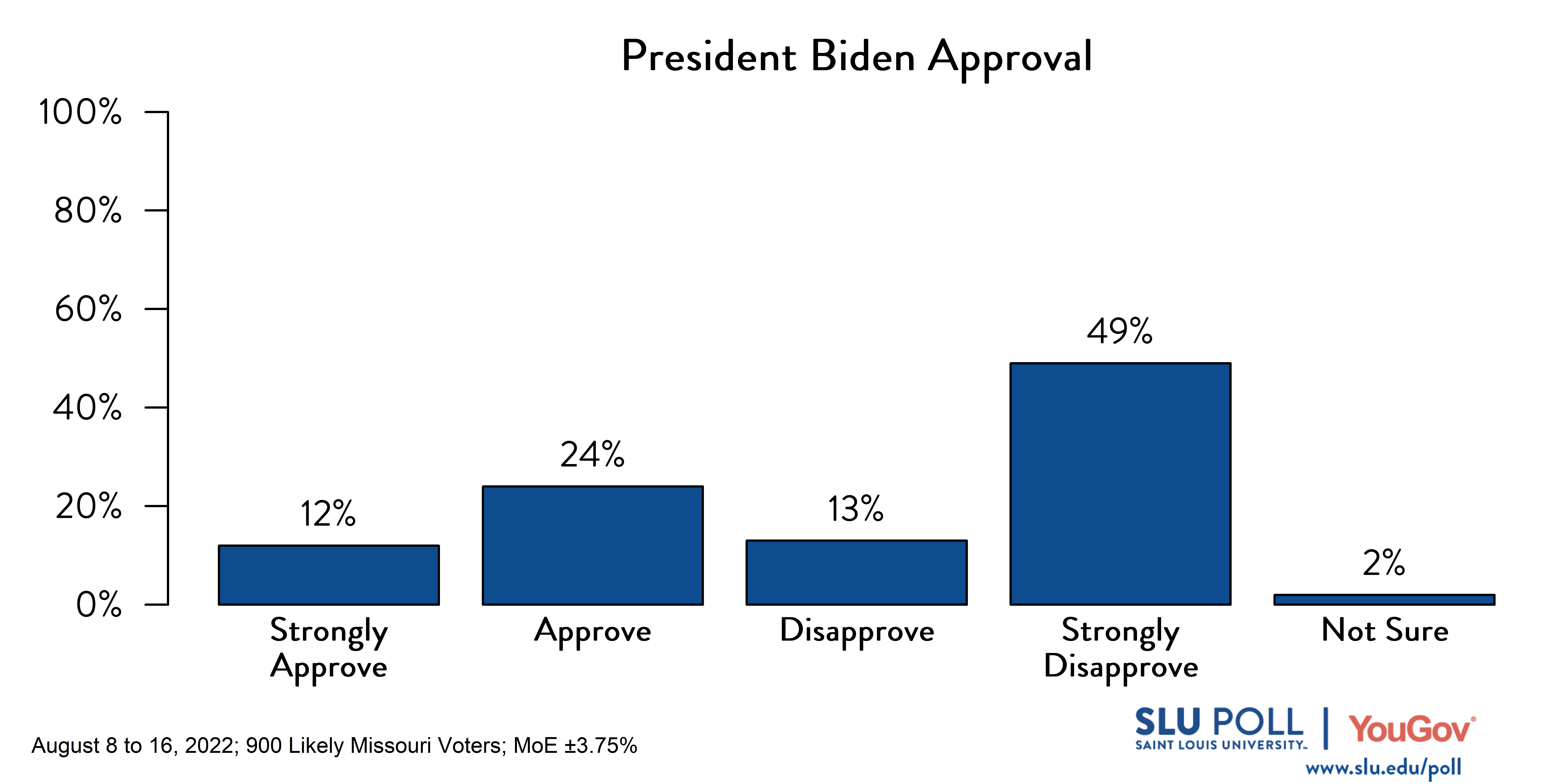 Crosstabs help provide insights into Biden’s disappointing numbers in Missouri. Our SLU/YouGov Poll showed that Biden received 69.5% approval from likely Black voters, 87% from Democrats, and 43% approval from both Metro St. Louis and Metro Kansas City. These percentages for Biden are very underwhelming since a sitting Democratic president should normally receive comfortable majority support from the metro areas of Missouri, close to 90% support from Democrats, and between 85% to 90% support from Black voters, although Black support for Democrats has been falling off in the last few years. It would be expected that Biden’s approval ratings would be very low from Republicans, but his approval ratings were exceptionally low, receiving only 2.5% approval from Republican likely voters with 10% disapproving and a whopping 87% disapproving strongly. Missouri’s likely Independent voters have also drifted away from Biden with just 26% approving of Biden’s job performance. It was expected that Biden’s disapproval scores in rural Missouri would be high since rural Missouri is very Republican territory, but his disapproval scores were very high, especially in Southwest and South East Missouri. In Southwest Missouri a total of 68% disapproved, with 60% disapproving strongly. While in very conservative Southeast Missouri, where Rush Limbaugh was born and raised, a total of 80% disapproved of Biden’s job performance, with 61% disapproving strongly. Of course, Biden’s numbers in our SLU/YouGov Poll suggest that Biden would not be a competitive 2024 presidential candidate in Missouri. 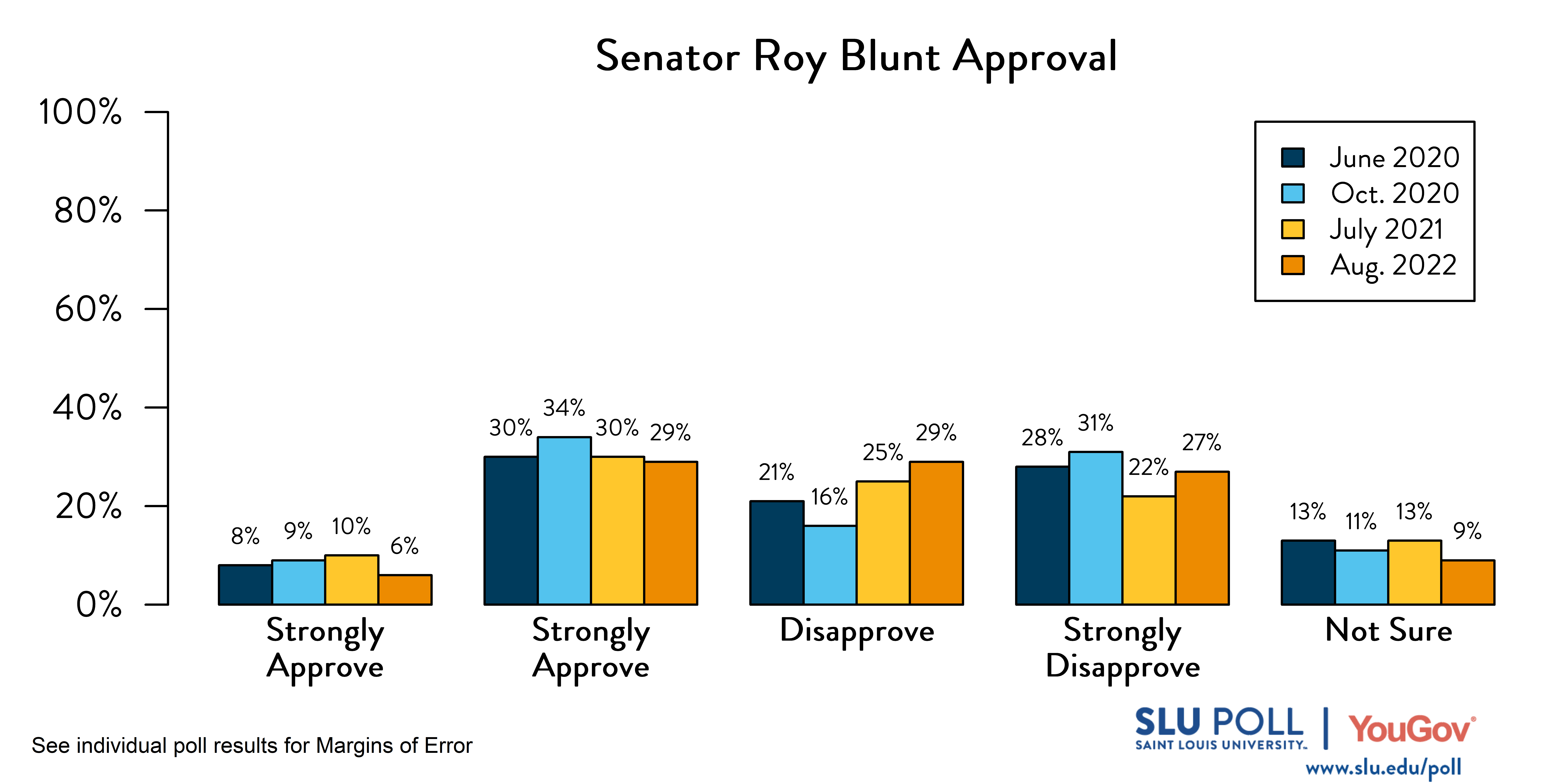 Rural Missouri continues to be a safe harbor for Missouri Republicans. Parson, Hawley, and Blunt, but less so, enjoy much higher approval ratings in the rural areas of Missouri than in Metro St. Louis and Metro Kansas City. The difference between Blunt’s approval ratings in the various regions of Missouri, including comparing his ratings in rural areas to the metro areas, were not much different, proved to be statistically insignificant. Hawley was found to be the most polarizing Missouri elected official, receiving more strongly approve percentages than Parson and Blunt, yet more strongly disapprove percentages as well.