The historic Samuel Cupples house was commissioned by St. Louis entrepreneur Samuel Cupples in the late 1880s. The home is a rare example of Richardsonian Romanesque architecture in St. Louis. 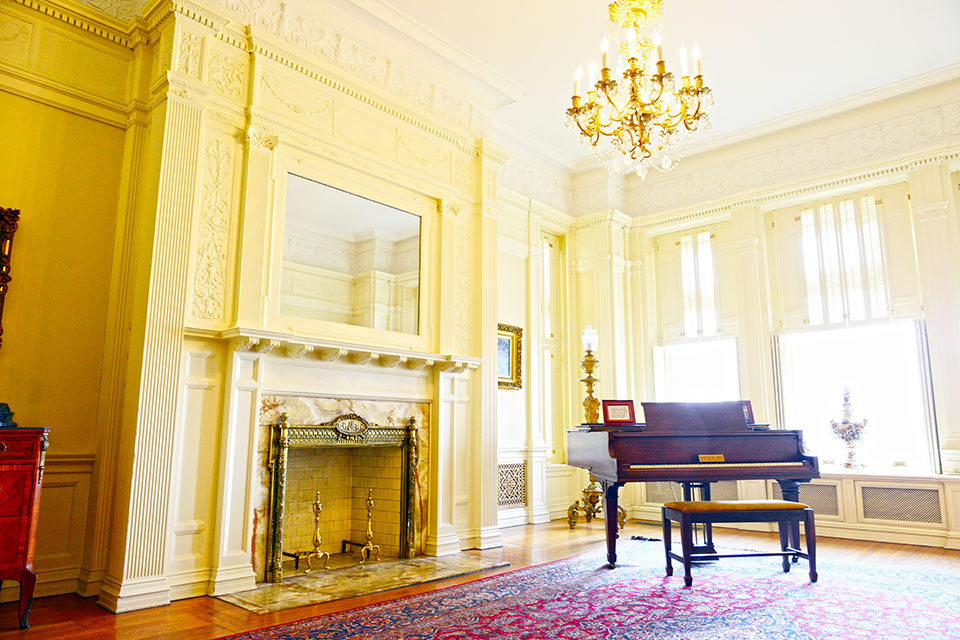 Located at 3673 West Pine Mall, the lot was the highest ground in the city of St. Louis at the time. Cupples House features 42 rooms and 22 fireplaces; leaded glass windows and intricately carved woodwork are found throughout.

Learn more about the design and architecture of Cupples House.

Cupples lived in the house until his death in 1912. Saint Louis University purchased the home in 1946 to use as classrooms and as a student union.

In 1973, Maurice McNamee, S.J., took on the task of restoring the house to its original appearance. A century of coal dust and city grime were washed away, revealing the rich colors of the stone exterior. Years of paint were removed, uncovering original wall papers. Saint Louis University benefactors from around the nation donated period furnishings. Cupples House was placed on the National Historic Register in 1976.

A building permit is filed with the City of St. Louis for a two-story residence at 3673 West Pine Boulevard. Estimated cost: $150,000. Architect: Thomas B. Annan.

Construction begins on the house and on stables located directly south of the house between West Pine Boulevard and Laclede Avenue. The stables include a blacksmith shop, horse stalls, servants' quarters and a kitchen. A tunnel connected the house from the basement to the stables.

Artisans were brought over from Scotland to carve the decorative stonework on the main house.

The completed house is now three stories and much over budget. The original design included a flat porch area at the back elevation and a narrow porch with a roof on the back northeast elevation.

A building permit is filed with the City of St. Louis by Saint Louis University to build DuBourg Hall at Grand and Lindell. It was rumored that Cupples was perturbed with the Jesuits because this large building cut off his eastern view.

A building permit filed with the City of St. Louis to enclose the back porches of Cupples House. The flat porch became a round conservatory and playroom with a glass skylight. The narrow porch was closed in and became the servants' dining room. The architect of record was Theodore Link, designer of Union Station.

A building permit is filed to erect a greenhouse west of the main house.

The house is sold to the Brotherhood of Railroad Telegraphers for their corporate headquarters. The stables are demolished.

Saint Louis University purchases the house for use as classrooms and a student union.

Plans are made to demolish the house to make way for a new building. Fr. Maurice McNamee, S.J., petitioned the University President, Fr. Reinert, S.J., to give him a few years to restore the building. With the help of University students, Fr. McNamee began the interior restorations.

Samuel Cupples House opens to the public for the first time, empty of furniture.

Samuel Cupples House is designated a historic building on the National Register of Historic Places.

The exterior of the house is cleaned to remove 90 years of soot. Throughout St. Louis, homes and commercial buildings were covered with industrial soot from the coal burning factories.

The lower level is redesigned to become an art gallery and art storage area.

Cupples House is cited by the National Victorian Society as an outstanding example of historic preservation and restoration.

The conservatory is remodeled and renamed the Harris Education Center.