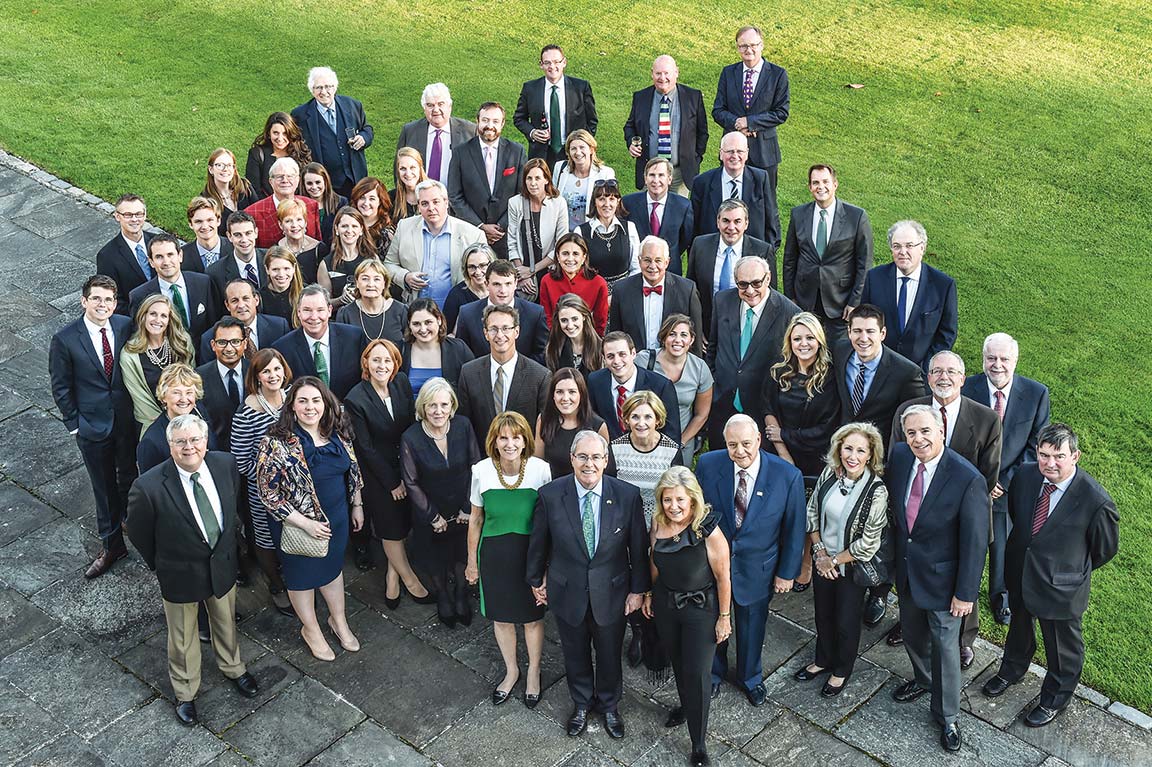 SLU LAW alumni, faculty, staff and friends on the School's inaugural trip to Dublin, Ireland, in 2015.

Space is limited. All registration and payments are due by Sept. 20, 2019.

We have reserved a room block at the Westbury Hotel in Dublin. If you are interested in reserving a room at the Westbury, please contact Kate Gough, groups and events manager, at kate_gough@doylecollection.com. Make sure to state in your email that you are part of the SLU LAW Alumni Group.

The room rate for our scheduled days is €380 for single occupancy and €400 for double occupancy per room, per night. Breakfast is included in the room rate. There are other hotels within walking distance that you may consider for your stay. The bus will depart for all our events from the Westbury Hotel each morning, so we suggest that you stay close by, should you choose a different hotel.

Programming will begin with a welcome dinner at 6 p.m. Wednesday, Oct. 16, 2019 and will conclude with a farewell brunch at noon Saturday, Oct. 19, 2019. We are still finalizing the itinerary and will post it on the website as soon as possible.

We suggest you plan your travel to ensure participation in the full programming schedule. The Dublin International Airport is the closest airport to this event.

MICHAEL McDOWELL is a distinguished barrister and senior counsel who over his career has served as Ireland’s Tánaiste (Deputy Prime Minister), Attorney General, Justice Minister, and an elected member of its Oireachtas (Parliament). He holds a baccalaureate in law from University College Dublin (UCD) and achieved his barrister-at-law degree from the King’s Inn. He will speak about the major controversies and consequences surrounding the decision of the United Kingdom to withdraw from the European Union (Brexit).

DEARBHILL McDONALD, although born in Northern Ireland, holds a baccalaureate in law from Trinity College Dublin (TCD) and a master's degree in journalism from Dublin City University (DCU). She spent many years as a journalist with the Irish Independent covering business and legal issues and frequently writing editorial columns. She currently works as a freelance journalist and is the author of Bust: How the Courts Have Exposed the Rotten Heart of the Irish Economy. She will speak on the long history of The Troubles and what the future holds for the relationship between Northern Ireland and the Republic of remand.

ENDA KENNY is the most recent former Taoiseach (Prime Minister) of Ireland, a position he held from 2011 to 2017, and led his country from its disastrous economic downturn to its current position of economic leadership in the European Union. He was elected to the Oireachtas (Parliament) at age 24 and is currently the longest serving member of that body. As Taoiseach he was intimately involved in relations with Northern Ireland and the sequelae of The Troubles, as well as with Ireland’s negotiations over Brexit. He will speak about those issues and modern Irish politics.

AMBASSADOR KEVIN F. O'MALLEY ('73) was nominated by President Barack Obama and served as the 31st United States Ambassador to Ireland from 2014 to 2017. During his tenure, Ambassador O’Malley developed the Creative Minds Series, a cross-cultural program that invited prominent U.S. artists, writers and innovators to share their experiences with Irish audiences, encouraging more creative economic links between young people in the two countries. In 2017 he returned to his hometown of St. Louis and has continued to work toward deepening these ties. He rejoined the firm Greensfelder, Hemker, and Gale, P.C., where he had previously spent 11 years as litigation partner leading the medical negligence and white collar crime and regulatory compliance areas of practice. He also was appointed non-executive director for the board of Greencore Group, a billion-dollar multinational food company headquartered in Ireland. A former federal prosecutor for the U.S. Department of Justice, he earned his J.D. from SLU LAW in 1973 and also has a degree in philosophy and political science from Saint Louis University in 1970.

MR. JUSTICE JOHN MacMENAMIN was appointed to the Supreme Court of Ireland in February of 2012, and he has been on the bench since 2004. Since his appointment, he has decided a number of cases with a human rights dimension, addressing issues such as the rights of asylum seekers, children in need of special care, treatment of prisoners and unmarried fathers. He has spoken and published frequently on the subject of family law and the law of children.