Doreen Dodson ('74) was leaving footprints for others to follow in long before she realized it. 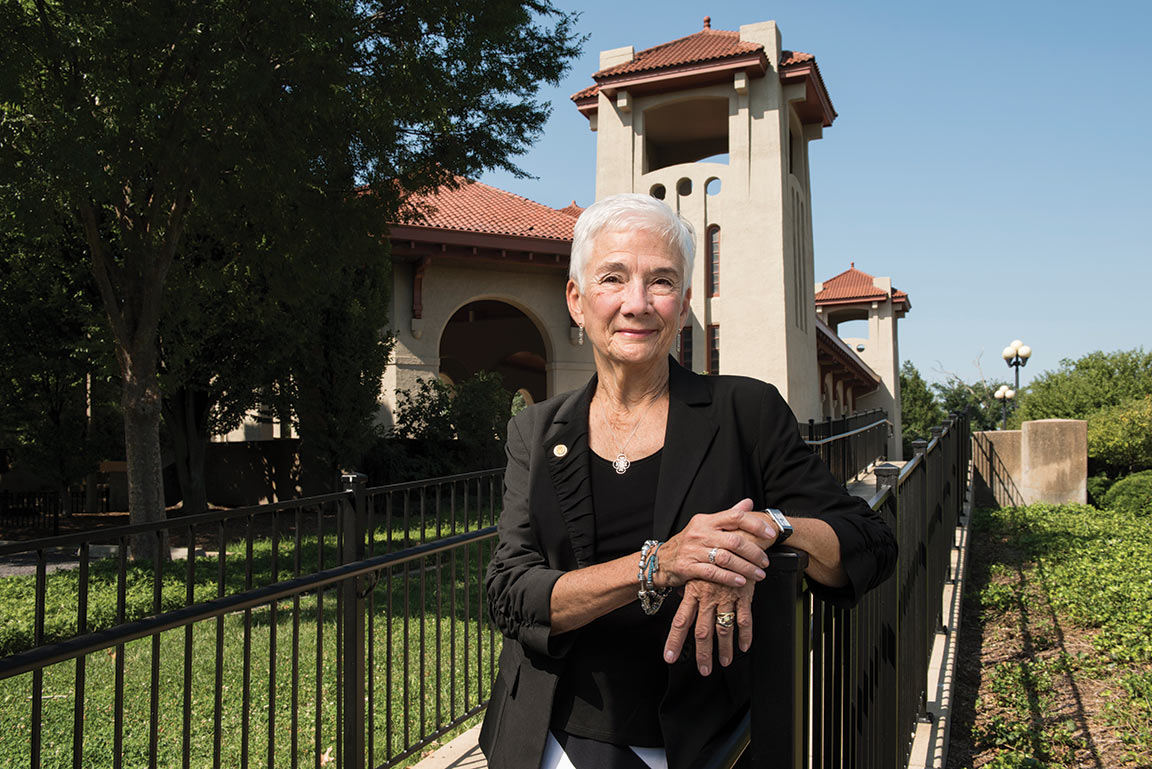 Doreen Dodson ('74) made state history in 1990 by being elected the first woman president of the Missouri Bar. She built her reputation as an employment lawyer and partner at the Stolar Partnership (1986-2013) and retired as a senior partner at Polsinelli in 2018.

It was the late 1960s, and the former special education teacher from Scranton, Pennsylvania, was raising three young children under age 4 when she started to think more seriously about realizing her lifelong dream of becoming a lawyer. When she expressed her desire about law school to a former professor, he urged her to apply sooner rather than later, when the kids would start getting into their own activities.

Do it while they’re still napping, he suggested.

At the time, Dodson was in the process of moving to St. Louis with her then-husband who was in a medical residency program, and they expected to be in the area three years at most. So she started the application process.

Her rejection letter from one of the two law schools where she’d applied began with “Dear Madam” and went downhill from there, explaining that since she was a mother, it would not be a good fit.

“In those days, young women were not particularly encouraged to pursue careers in law,” she said.

Her second letter, signed by assistant dean Peter Salsich Jr. at Saint Louis University, applauded her determination and encouraged her to attend with the other 24 bright young women, many of them moms, as well, who had enrolled for the upcoming fall semester.

As Dodson said with a smile, “I went to law school because I wanted to change the world.” And that she has – many times over.

After graduating, Dodson pursued what became an illustrious career in the fields of employment, immigration and elderly law. She helped instigate the passage of key laws and services that continue to benefit the indigent, the elderly and the very ill, and she worked tirelessly through the years in multiple capacities to maintain fair and impartial state courts in Missouri and nationwide.

When she first became active in the Missouri Bar Association in the early 1980s, for example, Dodson helped develop a Senior Citizens Handbook, which explained relevant legal topics concerning Missouri seniors in plain language. The handbook, published by Legal Services of Eastern Missouri and updated every two years, remains a staple handout and is available in senior living communities throughout the state.

As managing attorney of the elderly law unit at Legal Services from 1976 to 1983, Dodson worked to reform Missouri’s antiquated guardianship and conservatorship laws for the incapacitated by working closely with legislators to create a more modern law, including striking such egregious words as “imbecile” from the previous one.

And in 1990, Dodson was elected president of the Missouri Bar – a first for a woman in the organization’s 100-year history.

“It was a great achievement, because you have lawyers from all over the state and you elect somebody who is respected by the Bar generally, as Doreen is,” said Michael Wolff, School of Law dean emeritus and former chief justice of the Missouri Supreme Court. “I think it was important to have somebody as well-known, well-liked and well-esteemed as Doreen as the first.

“If you put it in context, it was shortly after the first woman was appointed to the United States Supreme Court, so it was the same kind of symbolic and substantive message that yes, the legal profession includes women; women can be presidents of the Bar,” Wolff continued. “That was really important. I don’t think that was necessarily in the consciousness of a lot of members of the Bar, and it was terrific to have somebody with her character and her abilities to serve in that position as the first woman – it really broke all the ice, shattered the glass ceiling.”

“For better or worse, being the ‘first’ of anything provides you with an opportunity to address policy issues,” Dodson said. “As president I had the opportunity to discuss and work on diversity challenges in the profession as well as on issues like end-of-life decision-making, and many of the awards I have been lucky enough to have received come out of that role.”

Most notably, as president she successfully lobbied for the landmark Missouri Durable Power of Attorney for Health Care Act, one of her proudest accomplishments, which gave citizens the right to establish advance directives regarding future health care decisions.

“There was no way in which to indicate your wishes that was legally binding,” Dodson said. “There were so many other states with more updated laws than ours that provided far more say on the patient’s end.”

So Dodson helped bring people from medical, legislative, legal and religious communities together to facilitate education on end-of-life issues: legislators were given the opportunity to visit hospitals and see firsthand the need for advance directives, and she organized forums and panel discussions on the topic for anyone interested. In just one year’s time, the state legislature passed the new law in 1991.

“People are now able to exert a great deal more independence regarding end-of-life decision-making, and what someone wants done and not done to them,” Dodson said. “This affects nearly every family at one time or another during their lives.”

Another enduring contribution: while serving as chair on the ABA’s Standing Committee on Judicial Independence in the early 2000s, in response to intense criticism and threats received by judges for making unpopular decisions, Dodson worked with state courts across the country to support and maintain a fair and impartial court system.

“We helped them to develop policies that enabled them to evaluate how ordinary folks perceived the courts, and to work with legislators to explain the value of an independent court system,” Dodson said.

A History of Success

Dodson’s foray into employment law began while working her first two years out of law school with prominent attorney Lou Gilden, who had represented Percy Green in the landmark Supreme Court case McDonnell Douglas Corp v. Green, focusing on civil rights. After that, in addition to her aforementioned role at Legal Services, she tapped into her former life as a teacher by becoming an assistant professor in the SLU LAW Legal Clinics, advocating on behalf of the poor and vulnerable, and then built her reputation as an employment lawyer and partner at the Stolar Partnership (1986-2013).

In January of 2018, Dodson retired as a senior partner at Polsinelli, where she worked for the past 3 1/2 years representing employers in employment and immigration issues.

Throughout the years, she continued to make her mark both within her profession and the community, serving in numerous leadership positions and amassing countless local and national accolades. Most recently, she won Best Lawyers’ 2017 St. Louis “Lawyer of the Year” for her immigration work; was honored as an inaugural member of the SLU LAW Order of the Fleur de Lis Hall of Fame in 2015; and was named “Woman of the Year” by Missouri Lawyers’ Weekly in 2012.

It’s important to keep forging ahead because the practice of law itself is changing."

Her contribution has been significant and her reputation impeccable.

“She’s always been involved in a law practice that is very important and has a big impact on our social structure,” Wolff said.

She is currently a board member for both the American Bar Foundation, the Missouri Bar Foundation and the ABA Immigration Advisory Committee. She also serves as a disciplinary hearing officer for the Missouri Supreme Court’s lawyer disciplinary system and is a master in the SLU Theodore McMillian Inns of Court, a mentoring group for current students.

For future lawyers, Dodson believes there is much work to be done.

“It’s important to keep forging ahead because the practice of law itself is changing in that there are new areas of law that need to be developed. We need to catch up,” she said. “This includes things such as lawyers advertising on social media, new crimes related to technology and data, as well as addressing developments in bioethics. In addition, jury trials have decreased significantly, so there is a problem for younger lawyers being able to get courtroom practice. Affordability is another issue; a large number of people have legal issues but can’t afford a lawyer.”

The list is long, and Dodson encourages up-and-coming students to take ownership of some of these issues. She has no doubt they will.

“Today’s young lawyers are increasingly enthusiastic in their willingness to try new things and are looking to the future in a vibrant way,” Dodson said. “I’ve encountered so many young attorneys, many of them women with young families and all of them with very active lives, still willing to take on a pro bono case or do service work. They embrace it with a great deal of energy.”

Outside of law, Dodson has supported and volunteered for numerous other organizations including Girls on the Run, St. Louis Public Radio and the Friends of the Sheldon Board.

And, yes, despite her initial three-year prediction to leave, Dodson fell in love with St. Louis.

“I found St. Louis to be a wonderful place to raise my children, a place filled with incredible civic amenities, and a legal community that continues to fully embrace a culture of supporting and providing legal services to those who can least afford it,” she said.

Two of Dodson’s children, in fact, followed in their mother’s footsteps and became lawyers themselves. Her daughter, Anna, is currently practicing in Boston, and her son Jason is an associate circuit judge in St. Louis County. Dodson’s other son Will is a chef and owns his own restaurant in Vermont. Dodson additionally has three stepchildren. And for her 17 grandchildren and six great-grandchildren, she’s confident their future holds a place of equal pay and fair employment for each – and maybe even another pioneering female attorney.