A decorative glass plaque with this boldfaced message “Believe there is good in the world” sits atop the Hon. Jimmie Edwards’ credenza inside his office at St. Louis City Hall. 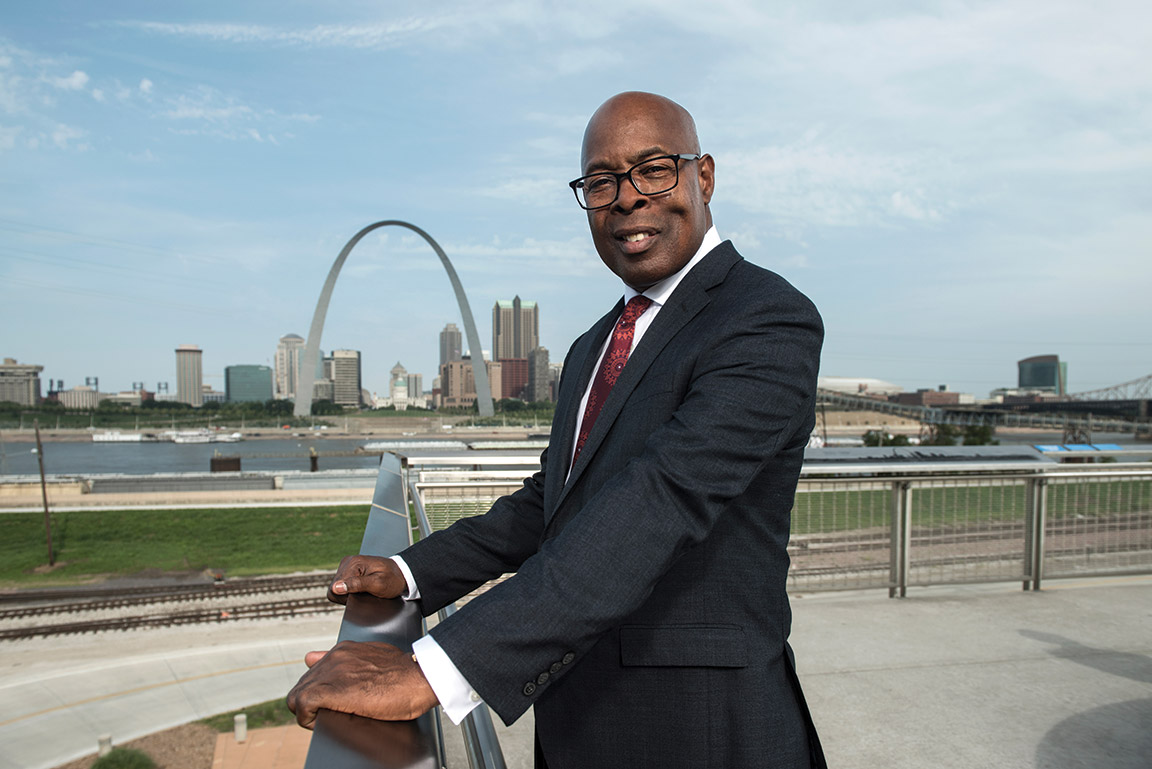 Inches away is a framed photo of him, his wife, three children and two grandchildren standing with U.S. Supreme Court Chief Justice John G. Roberts Jr.

Edwards, director of public safety for the city of St. Louis, points to each of his two sons and daughter and like any proud, beaming father, recounts their life successes. He laughs as he tells the story of how after the picture was taken, his young grandsons were invited to play a quick game of basketball on the Supreme Court justices’ basketball court, known as “the highest court in the land.”

No mention is made of why he is standing next to Justice Roberts. Nor of the sculpture of the William H. Rehnquist Award for Judicial Excellence that sits on top of a filing cabinet. Or any of the other awards and degrees scattered around his office, or stowed away at his former office across the street, home to the 22nd Judicial Circuit Court of Missouri.

Edwards, appointed to his position by Mayor Lyda Krewson in November 2017, is as humble as he is gracious. While he served as a circuit judge for the past 25 years, it was the five-year span from 2007 to 2012 as the administrative judge of the family court and chief juvenile court judge that allowed him to make an indelible mark on the futures of underserved children in St. Louis. From that work, the accolades continue to pile up.

And the Roberts photo? Taken in 2013, the chief justice had just presented him with the Rehnquist Award, one of the nation’s highest judicial awards. The other awards? Ebony magazine selected him to its 2013 Power 100 Most Influential in America List; People magazine named Edwards its “Editor’s Choice National Hero” recipient in 2011.

Edwards is featured in several national documentaries, including “Blood Brothers” and “Education Under Arrest,” Tavis Smiley’s film on common sense alternatives to “zero tolerance” discipline policies. His work was highlighted in a short vignette titled “Extraordinary Educator Jimmie Edwards,” which received a Mid-America Emmy Award, and he’s been featured by TEDx, giving a talk titled “Encouraging the Incorrigible – Smart on Crime.”

Edwards has delivered keynote speeches at the United States Supreme Court, the U.S. Chief Justice Association’s National Conference, the American Bar Association’s Thurgood Marshall Section Conference, the Juvenile Detention Alternative Initiative Case Foundation Conference, and the International Society for Reform of Criminal Law in Vancouver, BC, among others. More recently, he was inducted into Saint Louis University School of Law’s Order of the Fleur de Lis Hall of Fame.

There’s more, but again, you won’t hear about it from Edwards.

As both a SLU undergrad (’78) and law school alumnus (’81), Edwards has long recognized the importance of a quality education. Raised along with his four siblings by a single mom in the now demolished Pruitt-Igoe housing complex, the family, as Edwards says, “had nothing.” Public housing and food stamps were a daily reality. But it was the love and drive of a mother who knew the importance of family, generosity, humility and education that ignited the fire that still burns within Edwards. It allowed him to look beyond the brick walls of the housing project and see what could be.

“I realized early on that you are either lucky enough to be born into a great life, or blessed enough to stumble upon one,” Edwards said. “Through the kindness of strangers, I fell into the latter category. SLU provided me a glimpse of a whole new world, an opportunity to learn about a different type of life. I always tell people that you can’t dream if somebody doesn’t teach you what to dream about. SLU gave me that hope.”

Edwards took that hope, ingrained into SLU’s Jesuit mission of being a “man for others,” and began passing it along to his siblings. From his professors, including SLU LAW dean emeritus Mike Wolff, Edwards learned the impact an education can have on an individual and his or her community, and how their success can result in a better community.

“During college and law school, I began to understand it was never really about me, or my condition, where I had come from, or even about feeling sorry for myself,” he said. “What was crystalized for me by my amazing teachers was that what you do for others is what really matters.”

After rising through the ranks of private and public legal positions at Southwestern Bell Telephone Company, he was appointed to the St. Louis City Circuit Court in 1992. Four years later, the state passed the Missouri Safe Schools Act, which mandated a policy of zero tolerance for violent behavior in school.

Education allows one the opportunity to dream, to hope and to have some success. It’s the best prescription for a group of people lost in violence and poverty.”

Taken aback by the discriminatory practices that resulted from passage of this act on the young, underserved offenders who were appearing before him, as well as by the negative effects of their incarceration, Edwards felt he had to act.

“In my mind it was all about equalizing life’s chances for these kids,” Edwards said. “Children learn behavior no matter where they are. So is it better to have a nine-year-old locked in a detention center where he can learn more in one hour about drugs and crime, than it is to put that kid in a school and teach him what it means to be generous and kind and how to lead a productive life in his own community?

“Education allows one the opportunity to dream, to hope and to have some success,” he continued. “It’s the best prescription for a group of people lost in violence and poverty.”

So he sent them back to school. His school.

In 2009, Edwards created the Innovative Concept Academy (ICA), an alternative school for at-risk youth that addresses factors in the community that negatively impact the students and is a place where they can learn positive behavior. The ICA was created in partnership with the St. Louis Public Schools and Mers Goodwill.

Sixty students were enrolled that first year. Located at 19th and Cass in Old North St. Louis, the school today is home to more than 150 eighth- through 12th-graders. It is here where hope blossoms.

To qualify, students are recommended by administrators at the St. Louis Public Schools and by Edwards’ former colleagues at the Family Court-Juvenile Division. Retention is high, and the graduation rate tops 93 percent.

Edwards visits the school every day, serving as the ultimate role model and mentor for these young students. In fact, when he accepted the job as director of public safety, it was with the stipulation that he still be allowed to visit the school daily.

Whether it’s for morning roll call, a visit to the cafeteria during the lunch hour, or an after-school event, Edwards interacts with the students every day, encouraging them to work hard, reminding them he faced the same struggles they are experiencing. He also continues to work to bridge the chasm between the students and the police.

A 2017 documentary titled “For Ahkeem” features Edwards and his ICA work. It chronicles the struggles of a former ICA student at age 17, beginning one year before the 2014 events of Ferguson. The film illuminates the challenges that many black teenagers face in America today and witnesses the strength, resilience and determination it takes to survive.

Rising to the Challenge

While he doesn’t miss his judge robes, Edwards is the first to admit he turned down the mayor’s offer for the public safety job several times before eventually accepting.

It was the Jason Stockley verdict and the resulting protests that followed in September 2017 that changed his mind. 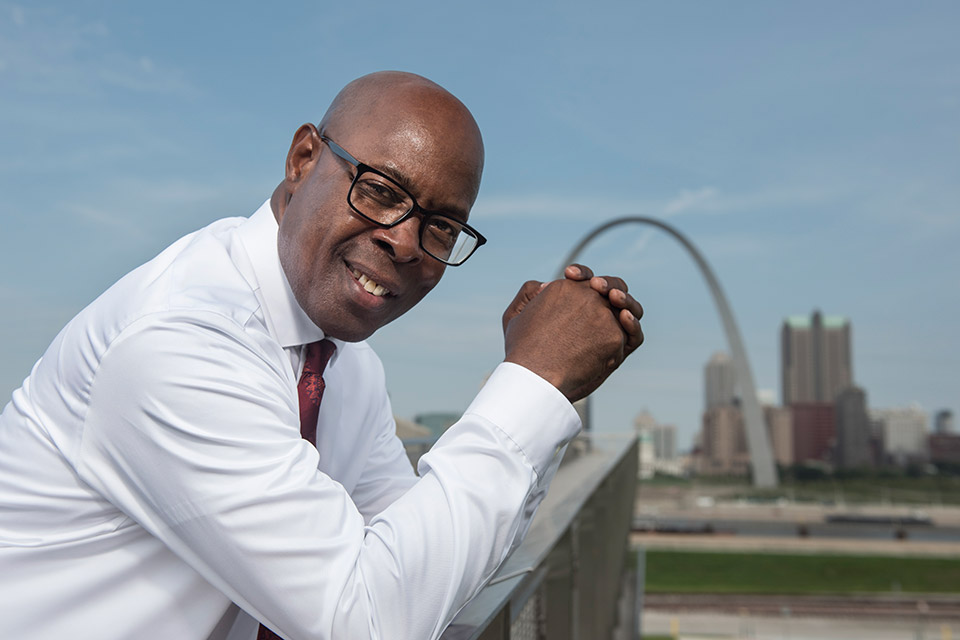 At the time of the job offer, Edwards had assembled a group of protestors to meet with him and Judge Jason Sengheiser (’03) at the St. Louis City Courthouse to discuss their concerns. It was during these discussions that he realized the impact he could have on trying to bridge the relationship gap between the community and law enforcement officials.

He called Krewson to accept the offer.

“The officers knew me from years of working with them in the court system. The community members and offenders knew me, too, from that same work,” Edwards said. “I realized if I could continue to engage both sides that maybe, together, we could accept and conquer the challenge. It takes everybody to engage in public safety. I knew then it was something I needed to do.”

Edwards is still involved in the legal world. Since 2015, Edwards has been a member of the National Advisory Board on Community Engagement in the State Courts. The 16-member board is part of the National Center for State Courts’ Conference of Chief Justices and National Consortium for Racial and Ethnic Fairness.

He is a board member for the National Center for State Courts. Having presided over more than 500 jury trials, Edwards is also still a member of the Missouri Supreme Court Civil Rules Committee and chairman of the State Judicial Records Committee.

In spite of all of his work in the community and beyond, and the long list of accolades that has since followed, it is that which has transpired within the walls of his own home that makes him most proud – his role as a father.

Edwards points again to the photo of his smiling children.

“I’d have to say being a dad has been the best thing I‘ve ever experienced in my life,” he said. “I didn’t have anyone to teach me how to be a dad. I had to learn on my own how to break the cycle that I had lived… and it was a day to day struggle to figure out how to do that.”