Becoming Part of the Solution

When Dana Malkus (née Miller) entered SLU LAW as a lL in 2001, following a one-year stint with Americorps, like many law students, her conception of what lawyers did was limited to litigation.

She knew she wanted to continue to do public interest work and naturally assumed that would be through litigation. 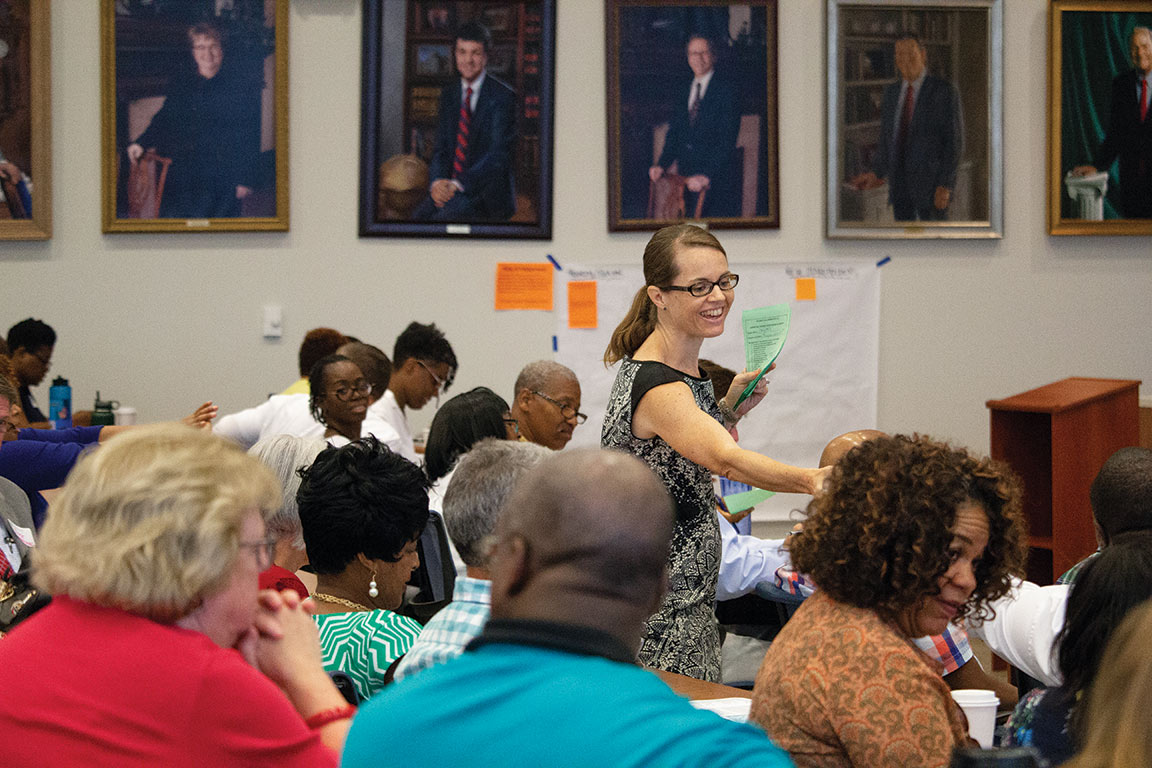 Dana M. Malkus ('04) is the SLU LAW associate dean for experiential education, an associate professor and the director of the Entrepreneurship and Community Development (ECD) Clinic.

After her first year, though, despite enjoying law school, she realized she did not want to be a litigator.

"That's when I met Professor [Pete] Salsich," she said. "We talked about community development and affordable housing, and that helped me see that I could take my public interest inclination and use it in a transactional setting, which really felt much more like a fit for me.

"I remember writing in high school that I wanted to be a so­cial worker, a teacher or a lawyer," she continued. "Those three things have always remained part of what I have been able to see myself doing."

After law school, Malkus clerked for a judge and then went into private practice for a few years, but she found herself missing those other components. When the opportunity arose to lead a clinic at SLU LAW, she knew she wanted to take it.

Today, Malkus is the associate dean for experiential education, an associate professor and the director of the Entrepreneurship and Community Development (ECD) Clinic.

"This is a dream job for me," she said. "I have the ability to be in academia and therefore work closely with students, learn from them and hopefully help shape them as lawyers. And I have the ability to continue practicing and representing clients that I am passionate about. There's a little bit of social work thrown in there, too, especially in trying to understand things from the perspective of people living in a particular place. How could I not want to do this?"

After being a professor for nearly 10 years, Malkus has honed a clear vision for the ECD Clinic by thinking about where she and her students can have the greatest degree of impact and where the resources of the law school can best match up with the city's needs. One area in which she has become an expert is on the issue of vacancy.

This year Malkus and her clinic joined nearly a dozen nonprofit and community organizations along with Mayor Lyda Krewson in forming a coalition — the St. Louis Vacancy Collaborative — mobilized to address vacancy. 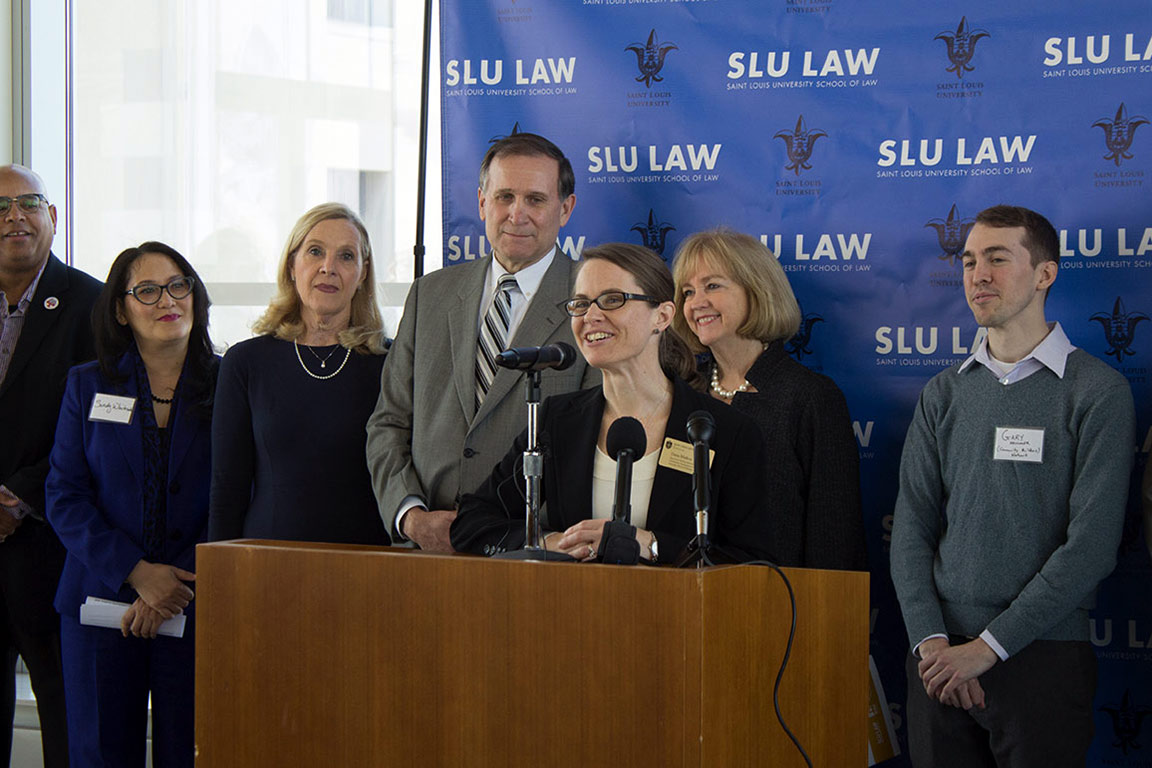 She and her students developed a guide to help empower neighborhood leaders, government agencies and other stakeholders to tackle the problem in a grassroots way and contributed to the development of a new tool, the Vacant Properties Portal, which offers the public groundbreaking access to vital data on the city's vacant properties.

Given Malkus' interests, it's easy to see the appeal: it's the perfect blend of individual connection while working toward systemic change.

On a given day this past summer, for example, she began her morning with an 8:30 a.m. meeting at Gelataria to discuss zoning laws, affordable housing and regional government reform. She followed that by zipping over to Starbucks for a 10:15 a.m. meeting to discuss recommendations for one small neighborhood trying to redevelop a handful of vacant lots and dedicate a local park.

"That's kind of how my days are — zooming in and out a lot," Mal­kus said. "The work is endlessly interesting and challenging because you are working on multiple levels.

"A lot of the work we do is around physical rebuilding, but then a lot is also around people, like having a quality daycare or having a small business in the community," she continued.

"Dana puts her heart and soul into her work," said Pete Salsich, Jr., the McDonnell Professor of Justice in American Society Emeritus and Malkus' mentor-turned-colleague. "She is a classic example of the Jesuit model of'men and women for others.' The kind of work she does is so mean­ingful, and in part because she puts so much into it and is so good at it. Over the years she's just come to embody that concept of service for others."

One of the clinic projects of which she is most proud was helping address a decades-long struggle to repair roads and sidewalks in the Lewis Place neighborhood last year. The problems had left residents feeling unsafe, neglected by the city and unable to effectively get around. She and her students worked to negotiate contracts with the city and work out the details of the repairs. The successful result, she believes, left the community with more than filled potholes and new curbs — it left them with a message of hope, that after all these years of worsening conditions, their voices had been heard.

"Part of our role and the privilege that we have is to be part of the restoration of broken things," Malkus said. "I think that aligns with the larger University Jesuit mission, so those are things that motivate my work. And I think for a fair number of students, that also helps motivate them."

Last year when Dean William P. Johnson appointed Malkus to the new role of associate dean for experiential education, she tackled the position with the same tenacity.

One of the first tasks she set out to do was to take inventory of all the existing opportunities for students in experiential pro­grams, i.e., clinics, field placements ("externships") and simulation courses (moot court, trial advocacy, etc.), and see them as part of a bigger picture.

"A lot of our opportunities here, like a lot of other law schools, have grown organically, but there hasn't been anyone to unite them, to drive communication to students about where all these opportunities are and to make it easy to understand how to take advantage of them," Malkus said. "I want to create more of a system where the entire faculty and staff understand them and can help connect students with the opportunities as we come into contact with them."

The other part of her role, she says, is evaluating the school's effectiveness in providing these opportunities, assessing what students need and what potential employers value, and ensuring compliance with ABA requirements.

Tying it all Together

Malkus is not a St. Louis native; in fact, she is from a rural county in southwestern Indiana near Evansville. She grew up on a farm where her family still lives and works, and appreciates how she grew up and now having both a rural and urban perspective.

Perhaps this makes her dedication to improve the city of St. Louis and to effect positive change alongside its residents all the more impressive, but Malkus sees it as simply offering what she can where she is.

Maybe the most radical form of public service is to fully engage in where you are."

"Oftentimes we do think of public service as working at a public interest law firm or sitting on the board of a nonprofit or volun­teering, and those things are important," Malkus said. "But maybe the most radical form of public service is to fully engage in where you are. So wherever we are placed — I mean really, wherever I am spending my days — there are people who could use my investment of time, and there are physical places where I live (my neighbor­hood, my workplace). Just being willing to commit to those people around us I think is actually really important."

Malkus believes it is increasingly hard in our culture to contribute to the public good, but she thinks we can always adjust our orientation to become more community-oriented.

"This goes deeper and starts getting into the theological realm, but I think we are designed for community," she continued. "We are designed to live in community, and when we don't live that way there are serious consequences. We can help each other shift our orientation. It can be hard in America, where we have such an individualized culture. You're kind of going against the grain. But to be willing to work collectively to be part of a solution — that is really key."