A Keeper of the Mission 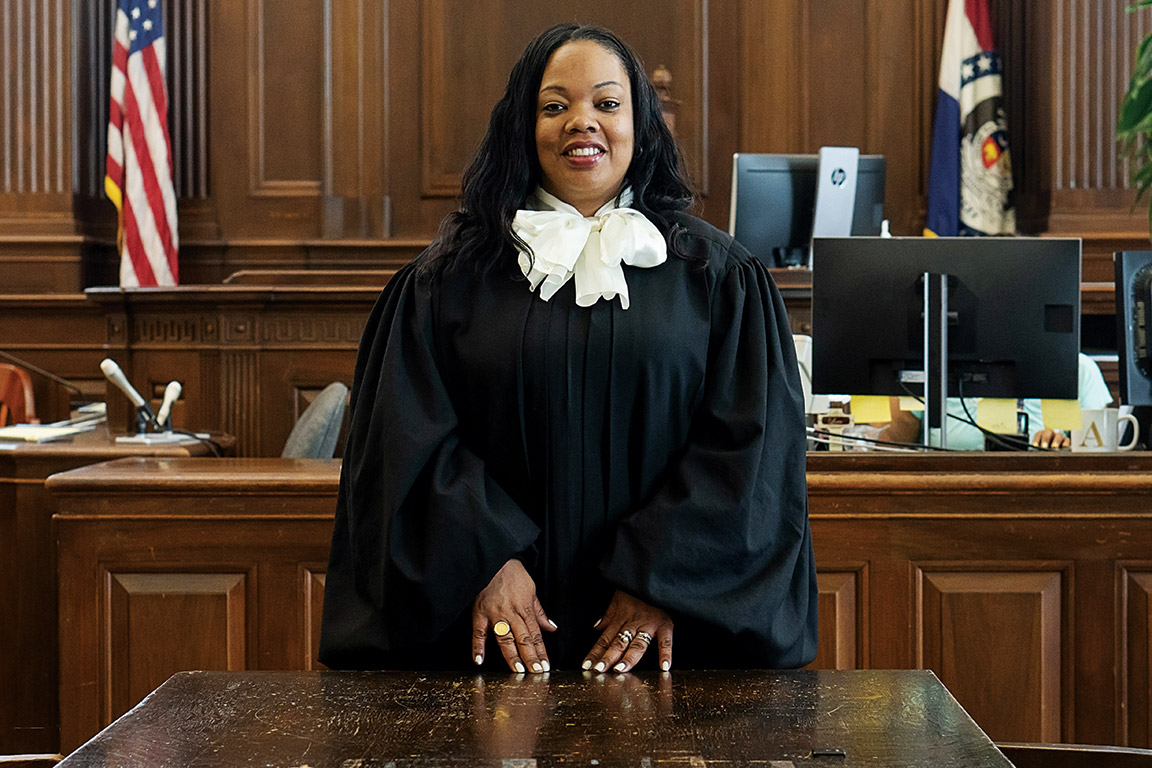 Judge Nicole Colbert-Botchway is the associate presiding judge for the 22nd Judicial Circuit for the City of St. Louis. Photo by Adam Westrich

As a high school student participating in Saint Louis University’s Upward Bound Program in 1986, she was inspired to pursue a legal career when she heard the program’s guest speaker, an attorney whom she later learned was School of Law alumna Dorothy White-Coleman (’82).

“That day I realized I wanted to use my time and talent to serve the community by speaking for those who have no voice and I could best fulfill my purpose by becom­ing an attorney like the black female at­torney who spoke. Armed with a purpose and knowledge to reach my goal, I began my journey with the end in mind.

“A couple of years later [as an undergrad­uate student], I walked back onto SLU’s campus to the admission office and asked for help fulfilling my dream of becom­ing the attorney [that the institution] had originally inspired me to become,” Colbert-Botchway continued. “The same day I submitted my application, I was accepted and received a scholarship.”

As a SLU undergraduate pursuing a degree in political science and African American Studies, Colbert-Botchway obtained a work study position in the Law Library and eagerly awaited the day she could start taking law classes.

“I watched and admired the stu­dents and faculty from a distance and fell in love with everything about the law school before enrolling.” 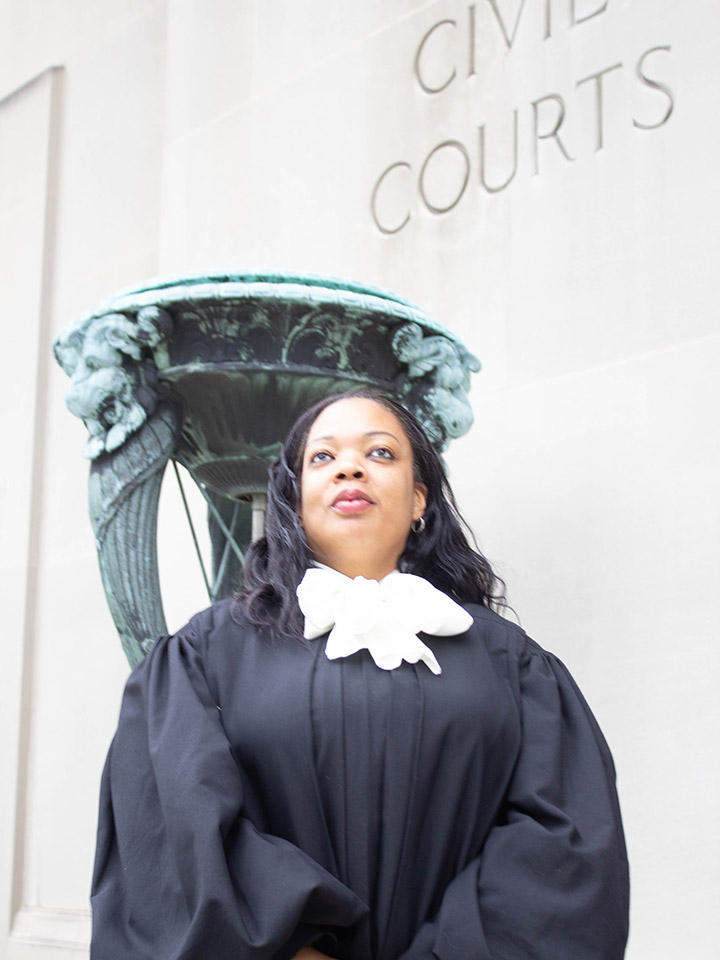 Colbert-Botchway eventually did get accepted to and attend SLU LAW, which she says prepared her to achieve the professional success and personal sat­isfaction she now enjoys 23 years later, as the associate presiding judge for the 22nd Judicial Circuit. Prior to serving on the bench, she served as assistant cir­cuit attorney and then assistant attorney general for the city and state, respectively.

“I can truly say that I owe my success to some of the keepers of SLU’s mission and vision, including professors Mike Wolff, Peter Salsich, Leland Ware, John Am­mann and Judge George Draper,” she said. “I had an enjoyable, well-rounded and supportive environment to advance my legal understanding and development. I am so grateful!”

Colbert-Botchway took that gratitude to heart and has adopted it as her per­sonal mission to give back as a mentor to the next generation of college and law students and to serve as a leader in her community. She was the first Afri­can-American president of the Wom­en Lawyers’ Association of Greater St. Louis and is a past president and lifetime member of the Mound City Bar Association. She remains an active member of the Missouri Bar and is currently its ABA delegate. Among numerous other volunteer activities, she is a member of Alpha Kappa Alpha Sorority, Inc.; the NAACP; St. Alphonsus Liguori “Rock” Catholic Church; and the Knights of Saint Peter Claver — Women’s Auxiliary.

Today, it’s the students and alumni who admire her.

“For women like me it’s important to see someone you admire doing the things you aspire to do, and it’s so much more important to have that person kind of carry you along and make time for you,” said Nkechi Ekwunife (’13), one of Colbert-Botchway’s men­tees as a law student and currently a sole practitioner in Los Angeles.

“I definitely would not be where I am today without her support, without her influence, without her mentorship,” Ekwunife continued. “I’m from L.A., so I couldn’t go home for every holiday, but not even just the holidays — sometimes you just need a mom in law school. She would have me over, she would show me around St. Louis, introducing me to members of her family. I had never been to St. Louis before I decided on SLU.

You can just go to school and not know the city and all that it has to offer, but she reintroduced me to the community. Being someone who’s not from St. Louis, she is St. Louis for me. … And not only did she do the normal mentor/mentee­ship, she really gave me life advice. She’ll pray with you and also pray for you.”

According to her mentees, Colbert-Botch­way’s influence as an example is profound.

The way that she carries herself in court exemplifies who I would like to be one day."

“The way that she carries herself in court exemplifies who I would like to be one day,” said Monique Abby (’03), another mentee and immediate past president of the Mound City Bar Association, where she has worked closely alongside Col­bert-Botchway for 15 years. “She’s so fair, she has so much patience. I go into the courtroom and I can see some people may be struggling. She makes sure they understand what’s going on, not just rush­ing through — she takes the care to really explain things and remember these are human beings, and these are their lives that we’re dealing with on a daily basis.”

Today, Dorothy White-Coleman, the attor­ney whom Colbert-Botchway had aspired to be like in the 1980s and another of her colleagues through the Mound City Bar Association, is the one singing her praises.

“It doesn’t matter where she is, she’s always going to do the best job possible,” said White-Coleman. “Her commitment to the community and to the rules of ethics are above and beyond reproach.”

Under Colbert-Botchway’s leadership, in 2013 the Mound City Bar Association began hosting an annual legislative sym­posium, inviting legislators — particularly African-American legislators — together to talk about common interests, and she remains the chair of this symposium to date. She also hosted a program featuring various people involved in the judgeship selection process to educate younger law­yers about what it takes to become a judge.

But beyond her innovations, successful programs and community imprint, her mentees and colleagues agree her defining quality is that she shows up for people.

As president of the Mound City Bar Association, Colbert-Botchway was always there to make sure the law students in the organization had the resources they needed, that the association was partici­pating in community service projects, that they were honoring the past presidents who came before them, that membership grew, and that the association kept the legal community engaged, Abby said.

“At every event, she made sure that we were there and we were present and that Mound City Bar was recognized and was a force to be reckoned with. … I just don’t see how she does it all, the work that she does in our community. It gives me the energy and the drive to keep going. I think, ‘If Judge Colbert-Botch­way can do it and she’s a judge, I can definitely do it.’ It pushes you to be a better person, to want to do more.”

“She’s always in the forefront of my mind when I’m thinking of how to be a great mentor, role model, leader — really wife, mother, she’s just someone of really high integrity that I look up to,” Ekwunife echoed. “The way she has mentored me and really been the kind of person she’s been to me has shaped so much of my life when I’m trying to pay it forward. She definitely is my reference point.”

Colbert-Botchway sees her role as a mentor as one that simply comes with the territory of having been in the same shoes as a struggling law student.

“I’ve passed each test I have faced thus far, thanks to God and the support and kindness I have received from Saint Louis University,” she said. “I will be forever grateful and work to be part of fulfilling SLU LAW’s mission of service to all humanity for years to come.”