Second-year law student Shannon Orbe participated in the Summer Law Program in Madrid and then interned at Reprieve, a human rights law firm in London.

She reflects on the experience here. 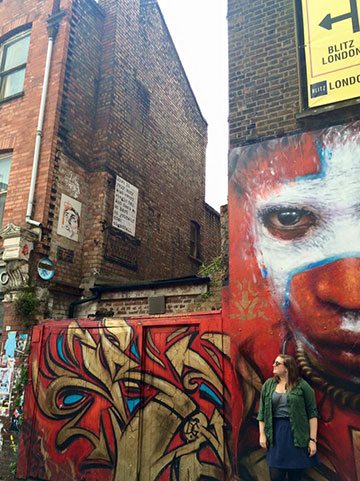 "This past summer I split my time between Madrid, Spain and London, U.K. A week after spring finals I traveled to Spain to begin SLU LAW’s summer law program on the SLU Madrid campus. It was an all-around fantastic experience and I am going to miss all the easily accessible tapas bars. This was my first time in Europe, so while taking classes I also managed to travel on weekends to Barcelona, Morocco, and Portugal among others. After summer exams, I traveled to London only three days after the Brexit vote. It was truly a historical and exciting time to be in Europe. I quickly adjusted from Madrid’s hot weather to a beautiful cool and grey London, but I definitely missed afternoon siestas.

Shortly after arriving I started working at Reprieve, a legal charity firm that provides legal and investigative support to U.K. and foreign nationals facing the death penalty and human rights abuses abroad. I was a legal volunteer on their Death Penalty Middle East/North Africa team. Although I was back in an English-speaking nation, trying to understand the U.K. government, U.K. legal system, and the staff meetings was like learning a new language.

I landed in a country where I didn’t know a soul, but have walked away with contacts, friendships, and invaluable personal growth."

I hit the ground running and was handed a case involving seven clients facing charges that may result in the death penalty. My work was split between investigative tasks, research, and writing memos or letters for my supervisors. One day I might spend the morning contacting a client’s general practitioner to submit requests for medical records that could be used as mitigating evidence, and in the afternoon I might be researching the Turkish Constitution and Turkish news sources to discover the likelihood of Turkey reinstating the death penalty following the attempted military coup.

Reprieve’s London office houses a small number of staff and volunteers so I was able to really get to know my co-workers and create lasting contacts as well as friendships. One of the staff members even arranged for me to shadow a barrister in a refugee tribunal hearing. I was expecting everyone to be in wigs and robes, but those formalities are mostly reserved for more traditional courts such as the Crown Court’s homicide cases.

London is a huge metropolis so it’s impossible to truly see all that the city has to offer in a few short weeks; however, I tackled most of the museums and major tourist sites. I even managed to take trips to Oxford, Bath, Brighton, and a long weekend in Ireland. One of my favorite parts of staying in London was exploring the many East London neighborhoods while I lived in Whitechapel. I traveled down Brick Lane for their massive Sunday markets that include food from all corners of the globe, home décor, and vintage clothing that would make any hipster swoon. I strolled down alleyways to capture the famous street art and feasted on some of the best curry of my life.

I highly recommend studying or working abroad if you have the means. I landed in a country where I didn’t know a soul, but have walked away with contacts, friendships, and invaluable personal growth. I really appreciate all the help from my family, SLU LAW, Professor Johnson, and Professor McGraugh for giving me this opportunity. Being at Reprieve, surrounded by brilliant, passionate staff and volunteers, was inspiring and it made me all the more eager to get back to SLU to finish my degree."