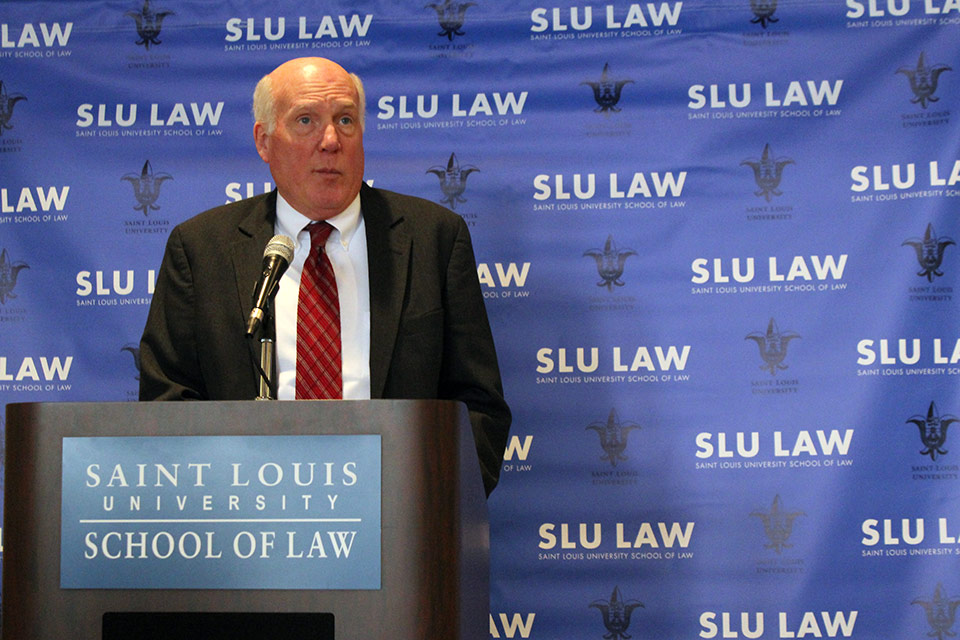 Professor John Ammann speaks at a Community Coalition for Clemency press conference in 2016.

The 68-year-old grandmother’s petition for clemency has been turned down by three Missouri governors since 2004, and without the clemency, she would have had to wait until she was 83 to become eligible for parole.

Led by SLU LAW Legal Clinics along with, recently, the Rev. Fr. Christopher Collins, S.J., assistant to SLU President Pestello for mission and identity, the Community Coalition for Clemency has been actively pursuing clemency for Henderson for six years.

The Coalition advocates for incarcerated women in the state, many of whom were the victims of domestic violence and who received sentences that were disproportionate to their crimes, and who pose no threat to public safety.

Litigation Clinic supervisor John Ammann, J.D., McDonnell Professor of Justice in American Society, joined by many of his students past and present, has been a longtime advocate for incarcerated women in Missouri. He leads the Coalition, which represents 15 women seeking clemency.

"We are extremely grateful to the governor for his grant of mercy during this great season of hope,” Ammann said. “The governor and his staff carefully reviewed Judy's case, and provided a very thorough and thoughtful statement that explains the circumstances of her incarceration. The Legal Clinics were honored to be able to be part of the legal team working for Judy, a team that included SLU LAW alums Shannon Norman and Bob Ramsey, who led the effort to get clemency for Judy. Shannon started working on Judy's clemency petition while she was a student in the Clinic, and continued to work for her release after she went into private practice."

"What a great blessing to hear of this act of mercy today by our governor to give an opportunity for a new chapter in life not only for Judy Henderson herself, but for her family and loved ones, as well,” Collins said. “This is a moment of great confirmation of our mission at SLU to 'pursue truth for the greater glory of God in the service of humanity.' We are privileged to have had some role in this moment where justice and mercy converge."

About the Community Coalition for Clemency

The Community for Coalition for Clemency was formed in 2014 by a group of concerned Missouri law professors, attorneys, law students, community leaders, former and current legislators and a former Missouri governor. The purpose of the organization is to advocate for incarcerated women in Missouri, many of whom were the victims of domestic violence and who received sentences that were disproportionate to their crimes, and in many cases, harsher than what men have received in similar circumstances. These women pose no threat to public safety, and have already served significant sentences. The group is led by Saint Louis University Legal Clinics, Missouri Coalition Against Domestic and Sexual Violence, and the Webster University Department of Legal Studies and Women and Gender Studies Program.

Saint Louis University School of Law was founded in 1843 and is the oldest law school west of the Mississippi River. The strength of the faculty, breadth of course offerings and extensive clinical and professional skills experience provide students with a well-rounded legal education. The School of Law’s rich history consists of strong connections to the community and a long tradition of public service. SLU LAW’s location in the heart of the City of St. Louis offers students unparalleled access to leading law firms, corporations, government agencies and nonprofit organizations — and a unique opportunity to see the law in action.