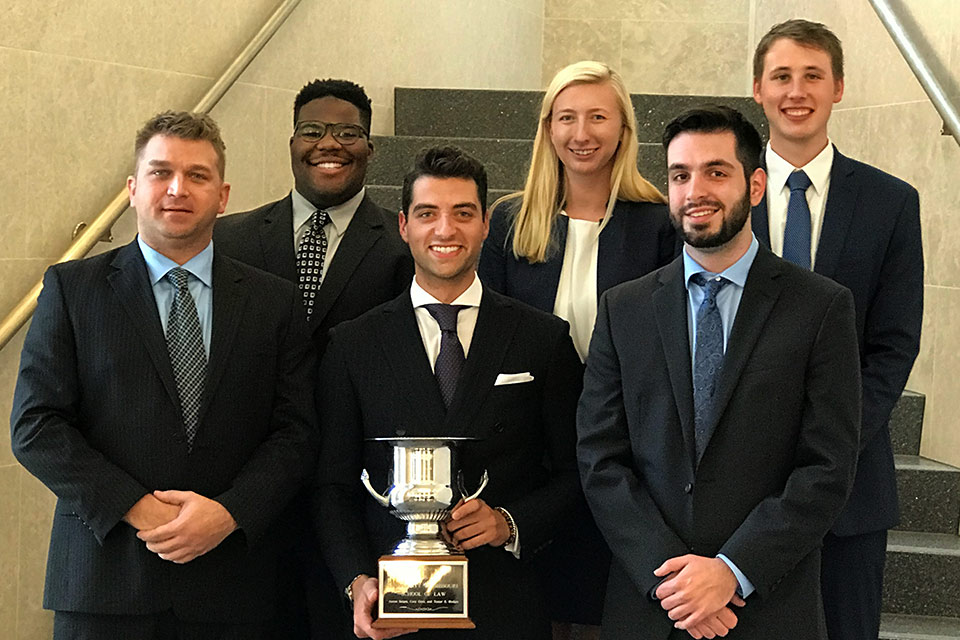 “It is a collaborative experience, and all of the students work together to prepare each other for competition, regardless of which of the two teams they are on,” Mickey said.

The goal of the competition is to give law students the chance to hone their courtroom skills and better prepare themselves for courtroom practice following admission to the Bar.

During each of the four rounds of the AG Cup, every team tries a complete case against a team from another law school. The students make opening statements, conduct direct- and cross-examination of witnesses (who are volunteers provided by the Attorney General’s Office) and give closing arguments. The students are judged on their trial advocacy skills by a presiding judge and two additional scoring judges, all of whom are practicing Missouri attorneys or current Missouri judges.

“My team’s approach was different from the other teams’, and I believe it was our biggest strength,” Rahimi said. “It seemed a lot of other teams went in with the approach of winning a competition, or to score points with the judges. Our approach was to win a jury trial, each round, as if there was a real verdict at the end. Our focus was on the jury and not the competition judges, and that’s why we stood out.”

In addition to working with each other and their coaches, the students’ preparation process also involved local retired judges and practicing attorneys to judge and serve as witnesses for the practice trials.

“They gave incredibly valuable feedback,” Boyle said, “and our coaches made sure we were prepared for almost anything. As 2Ls, Dashawn and I were nervous because we haven't taken Evidence or Trial Advocacy classes yet, but our 3L anchor Brandon was really supportive and helpful.”

Rahimi said the experience helped him prepare for life after law school.

“For trial, you have to find the perfect balance between being prepared, but not too prepared. Trials are fluid, and your strategy has to be, too,” Rahimi said. “I work at a law firm that prides itself on fighting cases at trial. Our default setting is to fight, so it was important to me to develop and hone my skills now, so I can hit the ground running after graduation.”