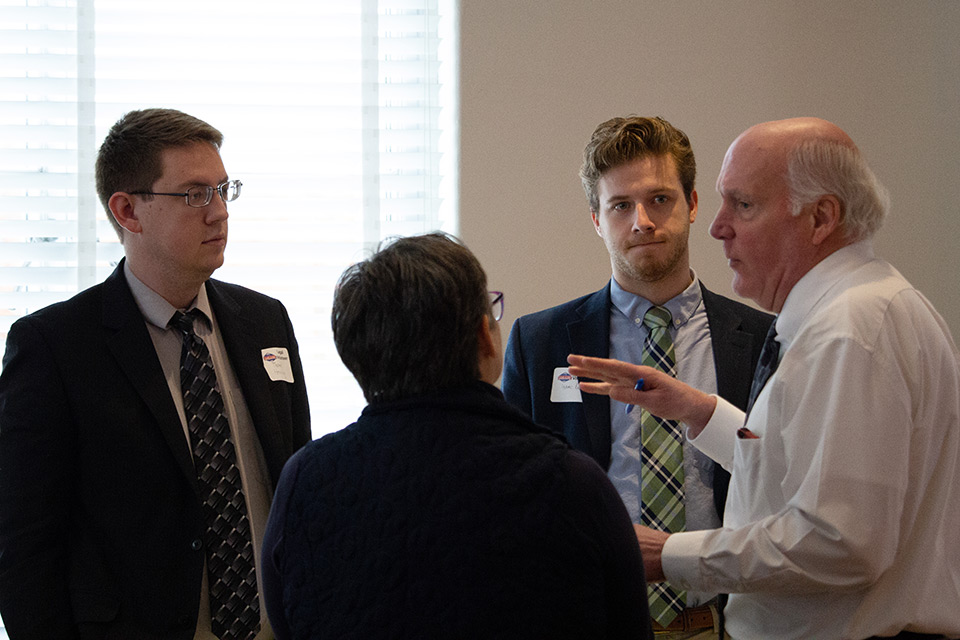 John Ammann the McDonnell Professor of Justice in American Society, supervises students in the Litigation Clinic as they participate in the 2018 St. Louis Homeless Veterans Stand Down on Nov. 9, at the newly reopened Soldiers Memorial Military Museum downtown. Photo by Adam Westrich

Krewson issued a mayoral proclamation acknowledging Prof. Ammann’s more than 25 years of service to the local veterans' community and declared Nov. 10, 2018, to be the Honorable John Ammann Day in the City of St. Louis.

There is no greater, stronger, vociferous supporter of those whose voices are not heard than John Ammann."

"There is no greater, stronger, vociferous supporter of those whose voices are not heard than John Ammann," Strom said. "I don't think there's anyone in this community who has provided greater legal support to the veteran community than John has. His impact, though, is really much greater than just one person, because John has brought along with him students over all these years and other lawyers. ... He's trained [them] to understand what the veterans need, and to understand that the families and caregivers are just as important to us as are our veterans. In military terms from my time, I look at John as what we call a force multiplier."

"Through his example, John has spent his life drawing a road map of what servant leadership looks like," Pestello said. "He carries out his work with a fervent warmth, always aware that people are at the center of what he does. ... John, thank you for all that you have done over the course of your career. You have served with upright zeal in each of your roles, and you have made Saint Louis University proud."