Prof. Miriam Cherry Shares Her Work as Visiting Researcher for the United Nations

Professor Miriam A. Cherry, co-director of the Wefel Center for Employment Law, spent the summer working at the International Labour Office (ILO), a specialized agency of the United Nations, in Geneva, Switzerland.

Cherry's relationship with the ILO began in 2015 when she attended the Regulating for Decent Work conference with other employment law professors from around the world. She was invited back to the ILO two more times, and in 2016 published a well-received paper in the Comparative Labor Law and Policy Journal. Based on her work on that paper, she was invited to do an extensive visit as a researcher, beginning in April 2018 as part of her sabbatical and continuing through August.

As a visiting researcher, Cherry got to observe the International Labour Conference sessions, which this year focused on sexual harassment and sexual violence in the workplace, and also got to experience Swiss culture. For the most part, though, she dove headfirst into a project on her area of expertise: crowdwork.

Cherry is one of a small group of researchers who are working on the intersection of comparative and international, labor and employment, and crowdwork and technology law. She’s been writing about tech and work since 2008, but when Uber became popularized around 2011, she saw her work start becoming more mainstream.

We sat down with Cherry to learn more about her experience at the U.N. this summer and her research. 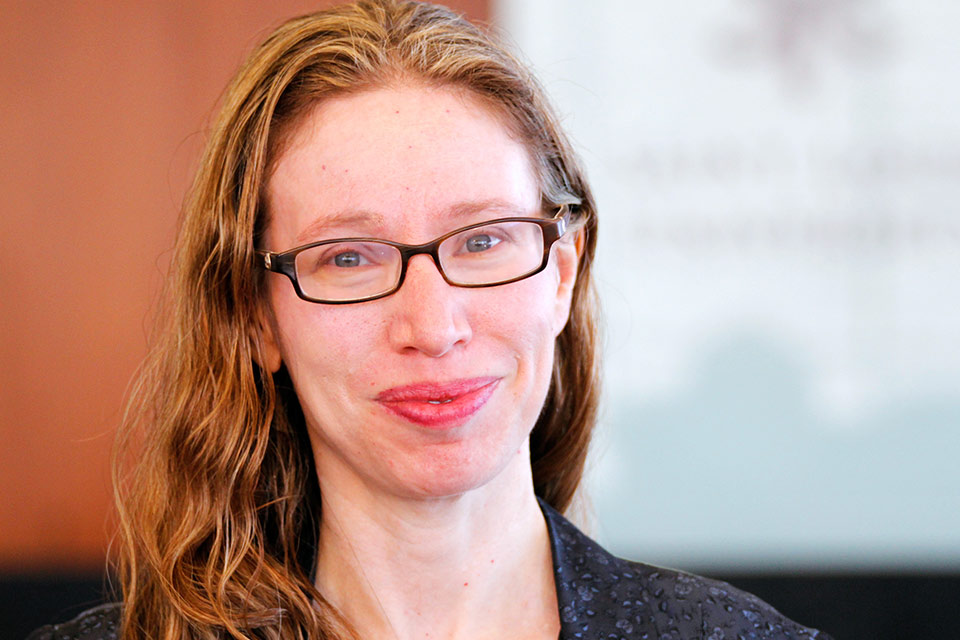 Miriam A. Cherry, J.D., is co-director of the William C. Wefel Center for Employment Law at Saint Louis University.

It was just pure research. Every day there would be an hour or two spent in the archives. There would be meetings to talk about the research that people were doing at the ILO. There would be seminars, but mostly it was just writing and researching this particular topic. If you wanted a vacation it wasn’t great for that, but it was an excellent place to work on a paper.

At the ILO the official languages are English, French and Spanish, and I don’t have the best grasp of French and Spanish. People would mostly speak English at the ILO, but everything around is all French in Geneva, so I really got a chance to work on my French. By the end I could understand pretty well!

What were some of your favorite places to travel?

Within Switzerland, the Bernese Overland – it’s an area near Berne. It’s wonderful mountains, and you can go hiking and take cable cars. They’ve got the cows and the pastures and you eat fondue –it’s the ideal of what you imagine Switzerland to be. And I did presentations at the University of Vienna and at Catholique University, KU-Leuven in Leuven, Belgium, just outside of Brussels. Leuven is a beautiful university town, and I highly recommend it to U.S. students who are looking for a foreign study program.

Tell us about your research.

I was working on a project about jurisdiction and crowdwork. So when you have computer platforms that are facilitating work, like transcribing oral recordings or tagging photos, it’s not the kind of platform work we think of when you say ‘I need to phone an Uber.' Instead it’s just all on the computer. There are a lot of websites like this, but the common pattern is that the website is usually hosted in the United States, the people who are posting the tasks are often located in Europe, and the people who are doing the tasks are located all around the world, oftentimes in India but many, many other places.

The issue is that labor and employment law has traditionally been thought of as a narrow, state-based type of field. But when you have something like this, it starts to become a lot more complicated. We’re starting to get into a phase where one country is saying ‘These look a lot like regular workers; we should extend them benefits and call them employees,’ and then you have another country that’s saying ‘We think these look more like independent contractors.’ This is happening in the United States, that we’re starting to get inconsistent rulings, but if we look five or 10 years down the road, that’s actually going to be an issue for countries. You have one country that says ‘We have this regulation’ and another country that says ‘We don’t have this regulation, but we have a different regulation.” [The businesses] are never going to just evade regulations completely – I think their hope is that they will, but I don’t think it’s going to happen. They’re going to come up with some way to regulate this, and my concern is it’s not going to be in any way consistent.

Lawyers have been describing what the courts have been doing, but no one's saying ‘What does this mean five or 10 years from now?’ And if you’ve got 85 different sets of regulations and you’re a business, that’s not great for you, either. You’d rather know what the rules are, and just work on complying with a set of uniform rules rather than worrying that you’re going to be sued in lots of different jurisdictions.

So no one's really thinking that far ahead, and that’s why the ILO asked me to come in and start working on the project.

How many people are working on this issue right now?

In some ways it’s exciting, but it’s a different environment because people don’t know what the rules are. I do think once regulation of crowdwork starts to happen, that’s when some of these concerns are going to be present, but the point is trying to look ahead so that it doesn’t become a problem.

For example, one issue that I raised was – nobody knows who’s on the other end doing these computer tasks, so it could be a prisoner, it could be an 8-year-old who’s supposed to be in school, it could be anybody doing this, and the workers constructing it.

So I was trying to draw a link between crowdwork and global supply chain for products. With a product, you also don’t see it. You get your iPhone and you don’t know what went into that, and in fact we know that some not-great things have happened in the past … so I’m trying to say that this is a similar concept, except that it’s labor the whole way. There’s no finished product; the product is the service of whatever you asked for. But it’s a similar type of concern, and the only way to get at that global supply chain issue is you come to a consensus with companies about what codes of conduct look like, what ethical sourcing is, what the violations are, and try to get a consensus and some standards and agreement from government and from multinationals that they’re going to do something about this. It’s my view that you have to do something similar when you look at the crowdwork problem.

Right now the only way this is being regulated is by what it says in the contracts, the online terms of service, which as we know are a joke."

But I have other thoughts, too, because there are specific codes the ILO has that don’t depend on the location of the worker. For example, people who work on ships in maritime … The ILO has a convention on this, and there’s actually a mechanism for enforcement, so it’s been very successful. So the question is whether you can do something like that for crowdworkers.

We have to get started thinking about harmonizing rules because otherwise I can see five or 10 years from now that this is just going to be a mess.

How many people are involved in crowdwork?

Thousands and thousands. Nobody knows exactly, there are different surveys that people have done. Time magazine did one a few years ago that was just looking at the U.S., but they included Airbnb, which many use but I don’t know if I would consider that ‘work.’ That study said 14 million people [are crowdworkers] – that’s a lot of people! And it fluctuates depending on what tasks are out there.

Right now the only way this is being regulated is by what it says in the contracts, the online terms of service, which as we know are a joke – they just say the company can do whatever it wants.

What would you recommend for students who want to work at the U.N.?

I would suggest if they’re interested in anything related to labor that they come talk to me. The law students who were there, [the ILO] really enjoyed having them.

I highly recommend it. The people really are passionate and care about workers’ rights, and that’s not true everywhere.

People are going get a great experience because they’re going to get to see what I got to see, which was the International Labour Conference: they’re always working on regulation that’s been a big problem in the workplace. A student would get the chance to experience that but also do research, where they’d be working on some really cutting-edge issues, and they’d learn about international labor law, which I think is a fascinating topic. And this is really the agency that does that – it’s like a department of labor, but a department of labor for the world.

Cherry will be visiting the ILO again in December 2018 and February 2019 to attend conferences and collaborate on research.