Author Richard Rothstein Explores ‘The Biggest Segregation of All’

“We have an obligation, if we take seriously our responsibilities as American citizens, to undo the segregation that our government has created,” Richard Rothstein told a group of students, faculty and staff gathered in SLU LAW’s John K. Pruellage Courtroom on April 25. “But we’re not going to fulfill this obligation unless we understand this issue.” 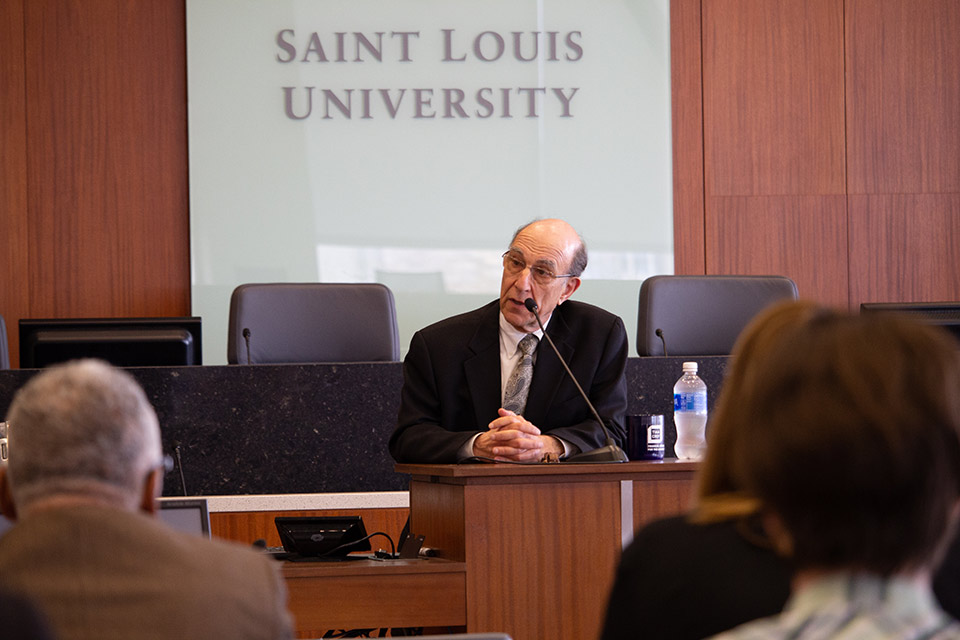 Scholar Richard Rothstein's lecture was sponsored by Saint Louis University School of Law, the Doerr Center for Social Justice and the Department of Urban Planning and Development. Photo by Adam Westrich

Rothstein is a Distinguished Fellow of the Economic Policy Institute and former New York Times columnist whose research focuses on the history of segregation in the United States. His most recent book, The Color of Law: A Forgotten History of How Our Government Segregated America, contends that racial housing segregation is not, in fact, the result of private racism and actions, as held in 1973 and 2007 Supreme Court decisions, but rather was deliberately established through powerful government policies.

He noted that despite tackling segregation in policies such as busing, water fountains and public accommodations, “we’ve left untouched the biggest segregation of all, which is every major metropolitan area in this country is segregated.”

“Unlike the other segregations that we abolished in the 20th century, residential segregation has clearly defined neighborhoods that are mostly all white and mostly all black. This kind of segregation is often called ‘de facto segregation’ or ‘accidental,’” Rothstein continued. “This is an utter myth. This is the product of very explicit federal, state and local policy.”

Rothstein’s brazen claim sounds provocative at first, but he carefully dissects it, beginning with the New Deal and the origin of public housing in 1933, for which the administration required segregation, thereby creating it in neighborhoods and cities where it had not previously existed.

“During World War II the process continued,” he said. “If the federal government wanted the tanks and ships, it had to provide housing for the war workers who flocked to these cities, and it provided segregated housing.”

Rothstein proceeded to trace the history that followed, from the post-World War II housing shortage, the subsidization of public housing and the development of suburbs.

“The reason that vacancies developed in the white projects and not in the African-American projects was because of another federal program: the Federal Housing Program was designed to get white families out of urban areas and to prevent African-American families from doing the same and requiring them to remain in the rented housing.”

Developers who wanted to build vast expanses of houses in the suburbs had to go to the Federal Housing Administration for the capital, Rothstein explained. The administration required the developers make an explicit commitment never to sell a home to an African-American and included in the deed a prohibition for homeowners to resell to African-Americans.

“Even though we passed a Fair Housing Act in 1968, which prohibited future discrimination, the Act could do nothing to undo the existing segregation, and one of the reasons was the wealth gap that these policies created,” Rothstein said. “Today these developments across the country have appreciated and are no longer affordable to working class families of either race. African-Americans gained none of that wealth because they were renting their homes. And today African-American wealth is 10 percent that of white wealth.”

This wealth gap points to many of the racial problems in this country, he said, including health disparities, the achievement gap in schools and the lack of upward mobility of African-Americans relative to whites.

“And if we don’t undo it, the racial polarization is only going to get worse.”

Rothstein has several ideas that would be starting places for reintegrating segregated metropolitan areas, including changing restrictions on Section 8 vouchers to be able to be used in the suburbs, and reforming the low-income housing tax credit program so that credits could be primarily used to develop low-income housing in high-opportunity areas.

He noted that he does have optimism about the feasibility of these and other types of policy changes.

“I think that we are having a more honest conversation today about the legacy of slavery and Jim Crow than we’ve ever had before. We’re now having a national conversation about race, and I think we’re making some progress.”

Rothstein’s lecture was co-sponsored by Saint Louis University’s Doerr Center for Social Justice and Department of Urban Planning and Development.