Originally from Fulton, Missouri, Reynolds attended college for one year playing baseball before pursuing a career as a professional umpire. He was hired into Minor League Baseball and worked his way through the system for more than three seasons before eventually deciding to finish school and go to law school.

He earned his undergraduate degree from Arizona State University, majoring in political science and minoring in philosophy, before applying to Saint Louis University School of Law.

When the opportunity arose to work at an international firm in the area of sports law this past summer, handling legal matters for several teams as well as the MLB, Reynolds jumped at the chance.

He discusses the experience here. 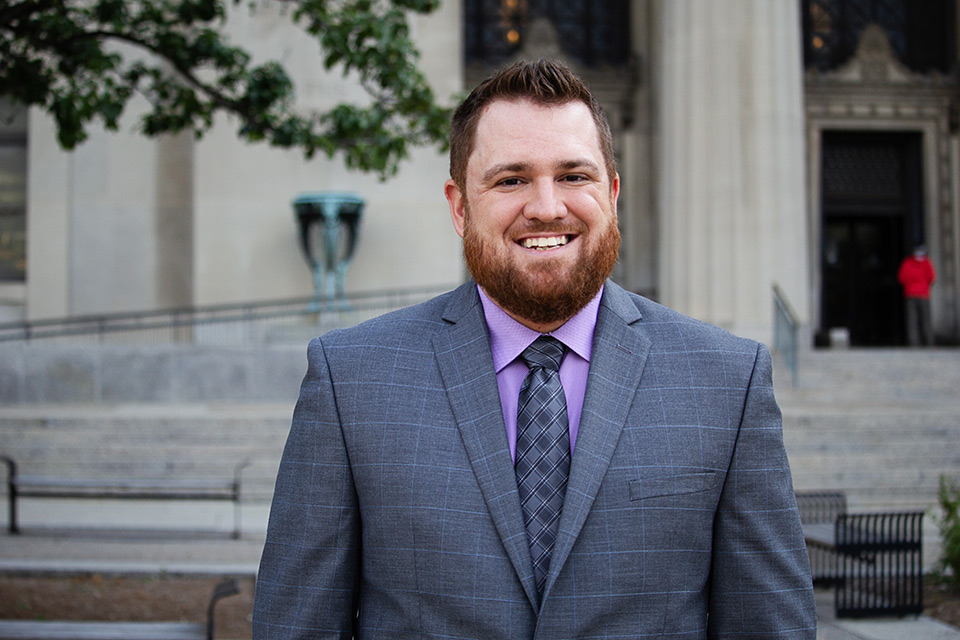 Second-year law student Aaron Reynolds was a professional umpire before attending law school. He spent part of this past summer working in an international law firm handling legal matters for several teams and the MLB. Photo by Adam Westrich

Why did you want to go to law school, and what motivated you to want to study and work abroad this past summer?

Being an umpire is very much like interpreting laws/codes and understanding the philosophy behind why things are interpreted a certain way in the courts. You do the same things when interpreting rules in the rulebook and making decisions on the field when something out of the ordinary comes up; it just comes at you a lot faster.

When I got out of baseball, I was under the impression that I took too long out of school to go back at that point, so instead, I was hired as an adjuster for State Farm. Eventually I worked into a role as a litigation adjuster where I managed the defense of our insureds, and working so closely with the attorneys I hired reinvigorated my interest in the law.

After talking to some, I found out how common it was to go back to law school after a period of time, so they encouraged me to go for it.

My interest, as I started to look at schools and talk to recruiters, was in international law – I just didn’t know in what capacity, so I thought the Madrid program along with an internship abroad would be a good place to explore it.

How did you learn about this internship, and why did you decide to pursue it?

In meeting with Dean Johnson in preparation for the Madrid program and discussing my interest in interning abroad as well, he asked if I had any interest in sports law. Turns out he had just met a partner at the firm and offered to reach out to see if he was interested in taking me on over the summer. It was a perfect fit. They provided me opportunities immediately to work on matters for several teams as well as MLB itself.

I’ve obviously spent most of my life around baseball and even worked within professional baseball for three years, so it’s been a huge part of my life and continues to be an interest. It was great working for the teams and MLB. I think it also helped me get acclimated faster, as it seemed like I had a decent grasp on what was going on in those matters since I was familiar with the industry. Much of the firm’s work with MLB is regarding its and the teams’ presence in the DR through their baseball academies.

Can you describe your day-to-day work, as well as a couple of bigger projects you did?

Lots of reading, some translation (they were determined to improve my Spanish), but most of all, I got to be very hands-on with what I was assigned. Rather than spending most of my time doing legal research, I would have a matter assigned to me and was expected to comb through it and then meet with the assigning partner to discuss my opinion on notable issues, strength of claims, potential next steps, etc.

One of the biggest projects I worked on wasn’t baseball-related. It involved a beverage distribution agreement in which our client, the DR distributor, was alleging multiple breaches by the supplier over the course of several years. I spent a lot of time reading nearly every email sent between the two parties over the course of their five- to seven-year business relationship, classifying if they were relevant, if so to which claim, and how strong that claim was. This also involved several meetings with the client to discuss our findings, next steps and strategies.

What was the biggest surprise about the work? about the Dominican Republic?

My biggest surprise, by far, was how prepared I was to actually do the job and how much the firm let me do. Going in I felt like I’d have training wheels on, but instead they gave me several matters and let me run with it.

I had been to other Caribbean countries before, but this was my first trip to the DR. It was great! I spent most of my time in Santo Domingo, but I did get to take a work trip to Punta Cana with a partner for a real estate closing, and another partner had all the associates up to his weekend home in the mountains during my last weekend. Overall the firm and all the people in it were great. They were inviting and were determined to make sure I had a good time there. I couldn’t have asked for a better experience.

Did you speak Spanish prior to this summer, and did the Madrid program and/or the internship give you the chance to work on your Spanish?

I spoke very little, I understood more than I spoke, and what little I spoke/understood was all just picked up conversationally through travel and my time in Minor League Baseball. Both the Madrid program and the internship helped to improve it.

I still have a lot of work to do before I can say that I “speak” Spanish, but being immersed in it for 12 weeks definitely helped. In Madrid I took the Spanish class that was offered, and in my internship I was assigned some documents to translate from Spanish into English and I saw improvements from each. 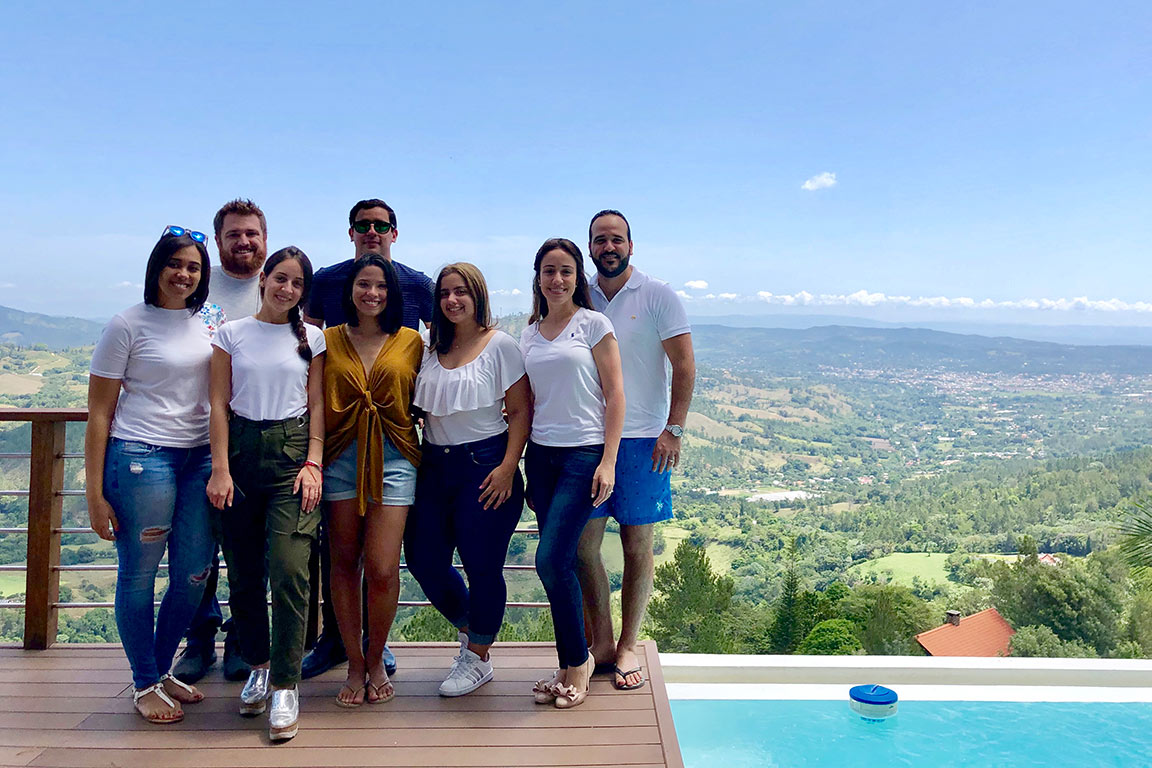 Aaron Reynolds and his ECIJA DVMS team in the Dominican Republic. Submitted photo

How did your overall experience shape your future career trajectory?

It motivated me. It solidified that I do want to continue on the international path, it exposed me to sports law, and it has encouraged me to actually work to improve my Spanish, as it showed me the benefits of that in working toward an international practice.

After law school, do you hope to live/practice abroad or have an international component to your practice?

Would you recommend that other law students go abroad for internships?

If they have any interest in an international practice, then absolutely. Actual experience in a foreign firm is experience that you can’t get any other way.

We’re used to taking a set of facts and issue-spotting as applicable with the American legal system, but when you’re looking at an issue with an American company doing business in another country, it adds another dimension to the analysis.