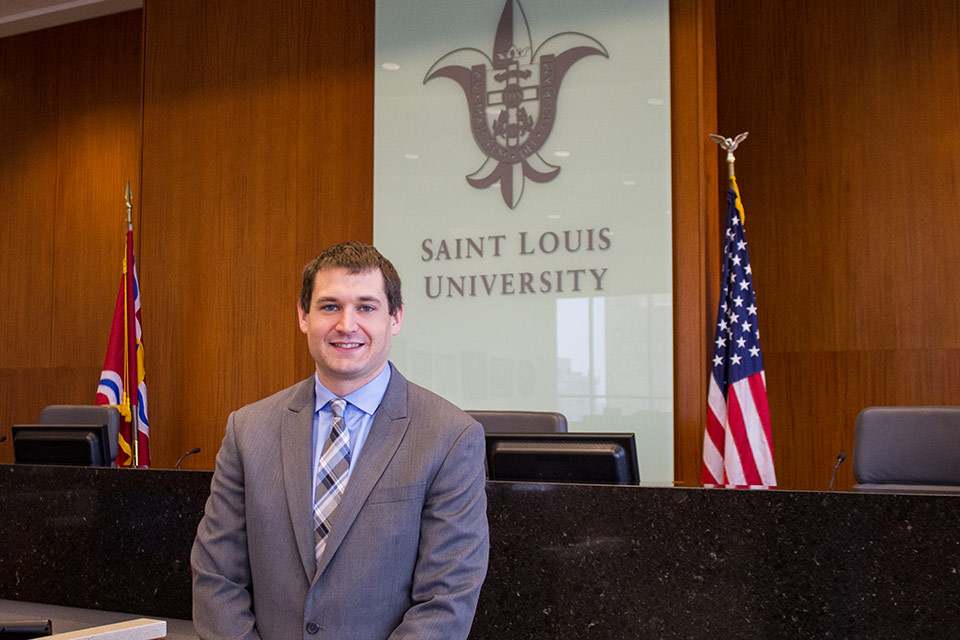 Brandon Hall ('19) graduated with concentrations in both health law and employment law. Photo by Adam Westrich

The award includes a $1,500 prize, presented during the ACEBC annual induction dinner in Washington, D.C., which will take place in September.

The mission of the ACEBC is to elevate the standards and advance the public's understanding of the practice of employee benefits law. It is comprised of preeminent employee benefits law attorneys from around the United States who have a minimum of 20 years of experience and have made significant contributions in the field.

Since 2005, the ACEBC has sponsored a writing competition for law students across the country to encourage participants to learn about employee benefits. Up to two monetary prizes are offered. Winners also receive an employee benefits treatise published by BNA Books, and one or more of the winning papers may be published by the BNA Pension and Benefits Reporter or in the BNA Tax Management Compensation Planning Journal.

“The area of law I am most interested in is ERISA, so doing some preliminary research and focusing on a hot topic within the field was an easy choice for me,” Hall said. “I became interested in the writing contest by knowing I wanted to focus on ERISA for my career and researching ERISA writing competitions.”

In his last year at SLU LAW, Hall was a staff editor of the ABA Journal of Labor and Employment Law. He also participated in the Employee Benefits Law class taught by Jim Singer, a partner at Schuchat, Cook & Werner and former member of the Department of Labor's ERISA Advisory Council, and Prof. Matt Bodie, co-director of the Wefel Center for Employment Law.

“Brandon is an extraordinary student,” Bodie said. “He is better versed on the minutiae of employee benefits than almost anyone. He spent hours developing the thesis for his paper and many more working on drafts and honing his analysis. He had to continually update the paper as new developments seemed to happen every week. I am so pleased with his final product and so proud that he has received this recognition he so clearly deserves.”

While at SLU LAW, Hall also served as a SLU LAW ambassador, as president of the Environmental Law Society and Student Animal Legal Defense Fund, as secretary of the Employment Law Association and as a faculty fellow for professors Elizabeth Pendo, Sidney D. Watson, and Ruqaiijah Yearby.

After taking the bar exam, Hall hopes to work in employee benefits litigation.

This is not the first time in recent years an employment law student has excelled nationally in writing. Last year Stefanie Brody ('18) was the first-place winner of the 2018 Louis Jackson Memorial National Student Writing Competition in Employment and Labor Law for her article “Treating Employees Like Widgets: The Legal Impact of Workforce Management Systems on Contingent Workers.” That competition is organized by Chicago-Kent Institute for Law and the Workplace and sponsored by Jackson Lewis LLP.

Another recent grad, Andrew Bauman ('18), won the 35th annual Smith-Babcock-Williams Student Writing Competition, put on by the Planning & Law Division of the American Planning Association. His paper addressed the legal side of form-based zoning codes and was published in The Urban Lawyer, the law journal of the ABA's Section of State & Local Government Law.