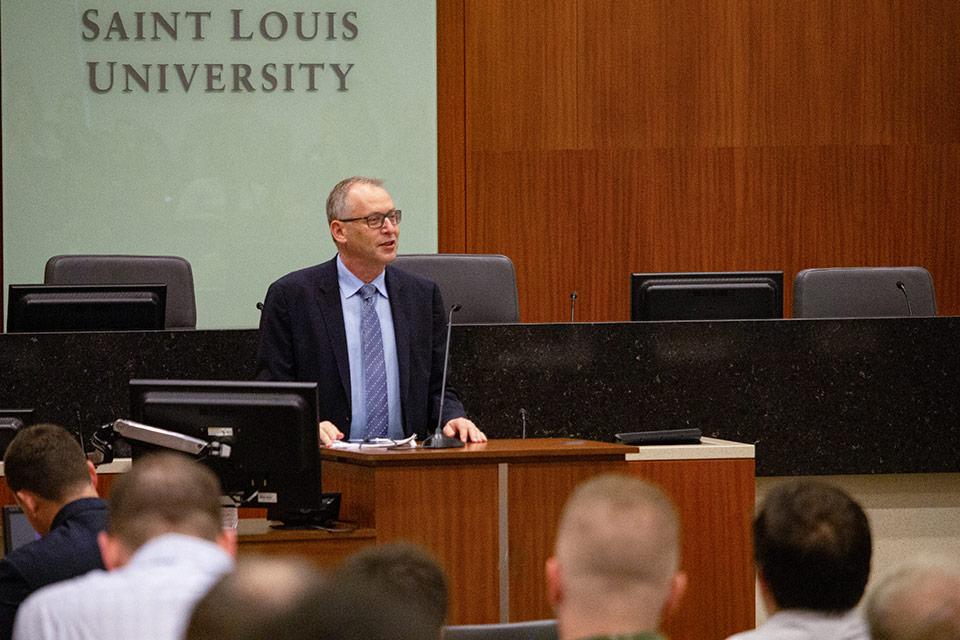 Richard L. Hasen, Chancellor's Professor of Law and Political Science at the University of California, Irvine, was the keynote speaker.

In his address, Hasen discussed the idea of a "post-truth world," one in which there is fundamental disagreement among members of the public regarding basic facts about the state of the world.

"It's a world where emotion is more important than evidence, where views commonly divide along partisan, ideological lines," he said. "Social media amplifies this partisanship, raises emotions and hardens positions."

One particular phenomenon Hasen explored was that of "deepfakes" — manipulated videos or other digital representation that yield seemingly realistic images and sounds.

Hasen discussed possible solutions to this dilemma that could be compatible with the First Amendment, such as passing limited laws to ban false election speech (such as false information about where and how to vote); implementing a labeling requirement to disclose whenever a video has been altered in any way; and expanding campaign finance disclosure laws when it comes to large amounts of money.

Justices are not only producers of opinions; they're consumers of information."

Richard L. Hasen, Chancellor's Professor of Law and Political Science at the University of California, Irvine

He concluded his address by asking how we can ensure that political losers accept election results as legitimate in this post-truth world, and by pointing out that Supreme Court justices are just as susceptible as anyone else to being manipulated by false information.

"Justices are not only producers of opinions; they're consumers of information. The justices are not unique in this regard — they’re like all of us. But that’s the point: they’re like all of us. We’ve elevated our justices into this position where I can’t imagine how large their egos are, and I worry that we depend on a court to decide these very difficult political issues when the justices themselves are facing this post-truth world."

A second panel explored "The Emerging Election Law Landscape," which touched on redistricting, gerrymandering, the disproportionate influence of wealthy individuals and institutions, and electoral legitimacy, featuring Derek Muller of Pepperdine University School of Law, Yasmin Dawood of the  University of Toronto, and Chad Flanders of SLU LAW.

The proceedings of the lecture will be published in a forthcoming issue of the Saint Louis University Law Journal.