Saint Louis University School of Law students once again made historical inroads for the rights of employees in the state of Missouri. 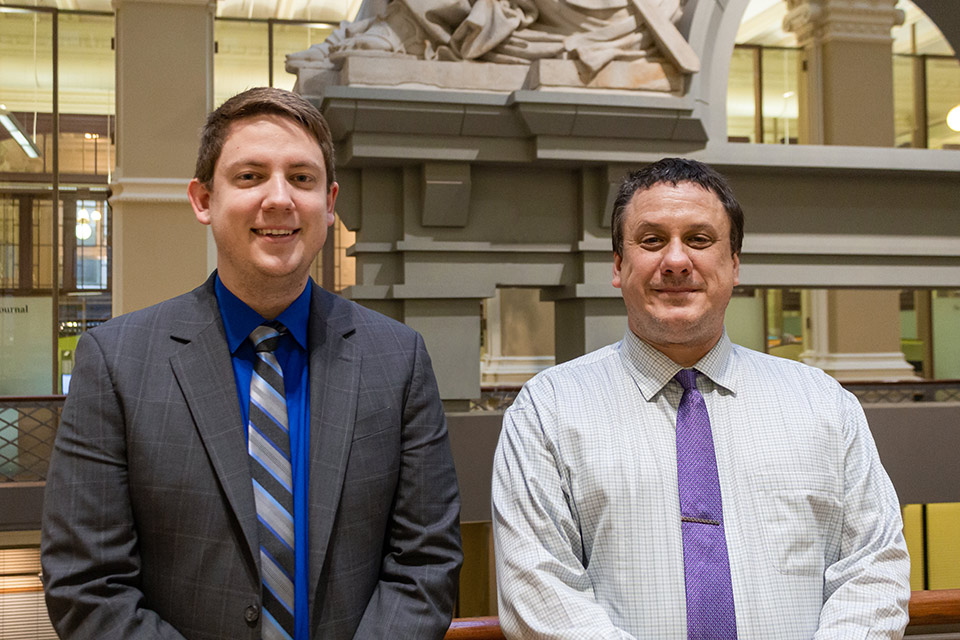 When their client’s employment was terminated by no fault of her own, she filed for unemployment benefits in the state of Texas. After being denied there, she applied in Missouri and was again denied. This denial by the Missouri Division of Employment Security was on the grounds that unemployment benefits have traditionally been awarded when a nonprofit corporation has four or more employees in the state of Missouri, which this nonprofit did not have.

Under the direction of John Ammann, the McDonnell Professor of Justice in American Society and co-director of the Civil Advocacy Clinic, Herring and Oliveira appealed this decision before the Missouri Court of Appeals, Eastern District.

Working together, Oliveira did extensive legal research while Herring worked with him on the brief and argued the case. They focused their argument on Section 288.034.8 of the Missouri Statutes, which states that working for nonprofits is considered employment if they have four or more employees generally; the statute does not specify that the employees needed to be localized in Missouri in order to receive benefits.

Alumna Marie Gillen (’18) had handled the hearing before the Labor and Industrial Commission while she was a student in the Clinic. Her work at the hearing laid the evidentiary foundation for the ultimate ruling in the case.

On Feb. 13, the Court of Appeals reversed the previous decision, enabling their client to receive the unemployment benefits to which she was entitled.

“This decision opens the door for more Missouri employees of out-of-state nonprofits to receive unemployment compensation when they have been terminated through no fault of their own,” Oliveira said.

“Being able to work on a case in law school that has such big implications for everyone in Missouri was incredible,” Herring said. “Sean and I frequently bounced ideas off one another, and getting insight from Professor Ammann was invaluable. He was such a big help throughout the entire process.”

“I want to give a shout out to Professor Ammann (our resident Ben Kenobi) and SLU LAW in general,” Oliveira added. “The practical law courses here (such as Legal Clinics, Moot Court, Trial Advocacy, Civil Advocacy, Client Counseling, Advanced Legal Research and so on) have really been the high point of my legal education. We all want to pass the bar, but after that, we have to be able to practice law. SLU really teaches that. I will be proud to be a graduate come May.”