How to Make It in Sports Law: A Conversation with Ese Ighedosa

The School of Law’s Sports and Entertainment Law Association (SELA) and the Student Intellectual Property Association (SIPLA) welcomed Ese Ighedosa, associate counsel for the Carolina Panthers, for a noon talk on March 20, titled “IP and Diversity in Sports Law.” 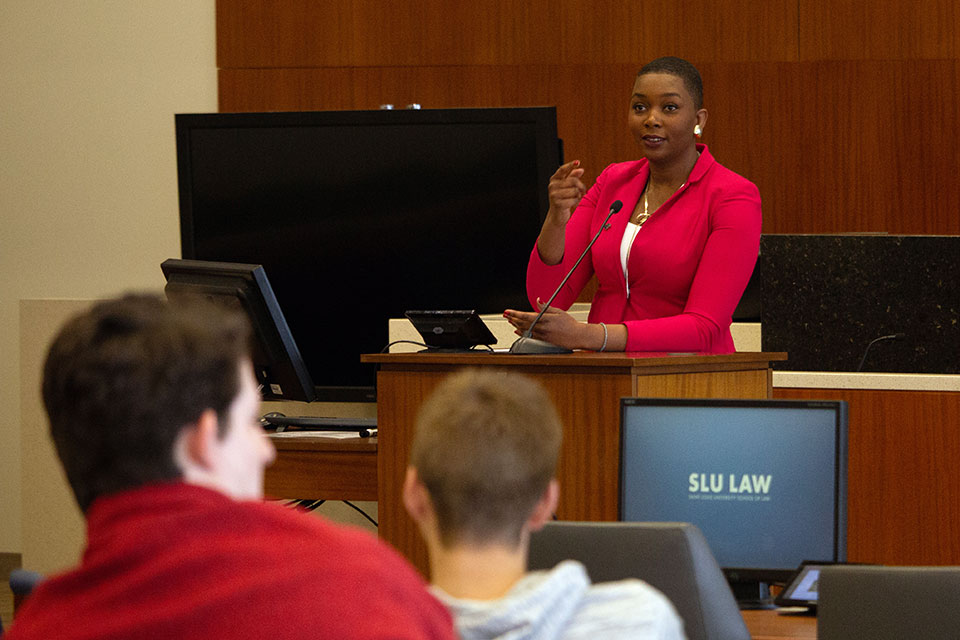 Prior to joining the Panthers in September 2018, Ighedosa worked for the National Football League (NFL) in Legal and Business Affairs and also worked for NFL Films as a contract coordinator. She got her start in the football industry in 2012 as a law student when she secured an internship with the Minnesota Vikings.

Ighedosa, a Missouri native, said she is proud to be from the Show-Me State and that on the East Coast “everyone knows where I’m from.” In a short speech and then a question-and-answer discussion with the nearly 40 students in attendance, she talked about her journey into the sports field, why she enjoys her work as in-house counsel, and lessons she’s learned along the way.

“I’ve always been interested in sports, and I figured if I’m going to be a lawyer, I need to be in an area that’s going to keep my attention,” she said. “What really attracted me to being in-house was, as my boss says, ‘It’s the flavor of the day’ — one day it could be a player got into a fight, and you need to advise him and the organization on how to handle it; the next day it could be licensing agreements.

"I realized I don’t want to do just one thing, and being in-house, you get to touch all of it," she continued. "Everything from a litigation standpoint, a risk-assessment standpoint — there’s a slip and fall in the stadium, we get that call. Sponsorship deals, media … It really is a plethora of mostly transactional work. But if a player gets into a scandal, our job is to protect the organization and protect our players. We’re the two people at the organization who really have that responsibility.”

Ighedosa spoke about the evolution of football clubs in recent years and how they operate as businesses.

“There’s a new generation of ‘fan’ — they want to experience the game in a different way, and now teams are in charge of getting their content on the phones [of their audiences]. These new younger fans, including you guys, need to be marketed to. So it’s been super interesting.”

One of the biggest issues in the sports industry as far as diversity goes, she says, is creating a pipeline of qualified applicants.

“Are we giving diverse candidates the opportunity to be a coordinator, to be a manager, so when the opportunity comes up, they’re there? If [diversity consideration] only applies to the top positions, you’re not going to have the right pipeline of people. I think it’s definitely on the radar, but there’s a lot of work to be done. … I’m super interested in hiring diverse law firms and hiring diverse lawyers at law firms, and my boss is, as well. It’s a good position to be in at a team [as general counsel] where you’re able to say, ‘We’ll let you do our work, but we want a woman at the table, we want a person of color at the table.’”

Her advice for students on getting a foot in the door of the sports industry — get experience wherever you can, think outside the box, build strong relationships in the field, be willing to make sacrifices and work incredibly hard.

It’s up to you to get in the door and be excellent at what you do."

“I bet on myself, and I think in sports it’s so competitive that you have to bet on yourself. … And what you do when you get in the door is really what’s going to set you apart. It’s up to you to get in the door and be excellent at what you do. It’s all about relationships. Sports people want to hire people that they know or that their friends know.”

Ighedosa said that even after she had passed the bar, she still found herself making minimum wage for a while by pursuing available opportunities within the industry — even non-lawyer opportunities — and there were times when she questioned whether she was on the right path.

“You’re going to be underpaid,” she said. “I’m not making as much as an associate at a law firm, there’s a trade off, and until you get to a certain level, you’re going to give up certain things, like compensation. [But] I wake up every day and my office is at the stadium. If you really want to work in sports, you have to be willing to move, you have to be willing to take risks.”

She encourages law students who want to work in the field to take advantage of conferences and the chance to meet industry professionals wherever they can, even if it’s as simple as sitting at a hotel bar outside of a conference to strike up conversation.

“This is a league of relationships, but that’s why you want to go to those conferences — so when you are ready to apply, they know you, they’ve seen you,” she said. “You’re not going to connect with everyone, but you focus on the people that you did, tell them what you want to do, keep them updated on your successes. … People want to see that drive. There are so many people who want to work in sports but don’t want to do the work. It’s not going to be sexy, but it’ll be worth it.”