In December 2018, third-year law student Rose Tanner wrote the brief for and argued an unemployment case on behalf of a Legal Clinic client before the Missouri Court of Appeals. The court ruled in her favor in January, and her client was determined eligible to have received unemployment benefits. 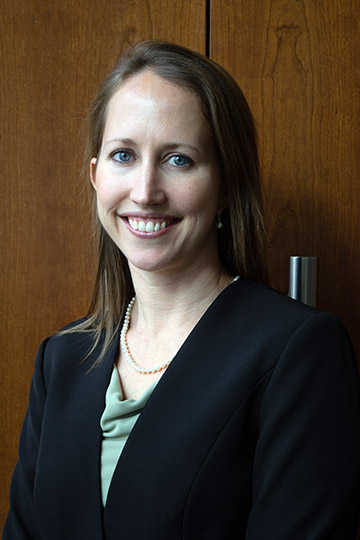 The decision sets new precedent in Missouri for employees who have to decide whether to accept a significantly lower position than they previously held or leave the company.

Tanner argued on behalf of a plaintiff who worked as a general manager and human resources director at a retail store in St. Louis County. Only a few months after accepting that position, which included the option to bring her child to work to save on childcare expenses, the plaintiff was informed via text message that the company was eliminating her position, but that she could stay on as a regular employee with lower wages and fewer hours. The reduction meant that she would lose nearly a third of her weekly income, in addition to the revocation of the benefit that allowed her to bring her child to work.

The plaintiff immediately sought to address the situation with the company’s vice president by phone and in person, but no modification of the text-messaged offer was made. Her options were to accept a significant demotion and loss of pay for reasons unrelated to her work performance, or quit. Feeling as though she was left with no choice, she quit and applied for unemployment benefits. She was awarded them, but then her employer appealed.

The Missouri Division of Employment Security and the division’s Appeals Tribunal found that in light of the circumstances, the client did qualify for unemployment benefits and had good cause to leave her position, but the Labor and Industrial Relations Commission reversed that decision.

The Missouri Court of Appeals disagreed with the Commission’s ruling and ultimately ruled in the plaintiff’s favor.

It made me realize that there are so many people out there who get court decisions and really deserve the chance to be in court with an attorney."

“We had a couple different arguments,” Tanner said. “Our first argument was that she lost her job, period, so she should get unemployment. But when I went to oral arguments, the judge right away said, ‘Please jump to the second argument.’ The weren’t as interested in that first argument. They wanted to jump to the argument of ‘Well, she quit her job, but it was with good cause.’ So that’s the position that the court decided.”

The process involving Tanner and the Legal Clinics lasted nearly nine months, with Tanner first speaking to the client by phone last summer and meeting with her in the fall. Throughout the process, Tanner worked under the guidance of Litigation Clinic director John Ammann (’84), McDonnell Professor of Justice in American Society.

“This was my first experience working for a client who otherwise did not have an attorney,” Tanner said. “This client probably would not have had the money to hire an attorney. So that was a great experience because it made me realize that there are so many people out there who get court decisions and really deserve the chance to be in court with an attorney. She deserved to keep that money that she was awarded. So it really made me feel like I wanted to do some pro bono work in the future.”

Not only was this Tanner’s first courtroom win, but it was her first time in a courtroom altogether.

“It was quite a first time!” she said. “I was nervous of course, but at least I knew I was prepared and I was going to give it my best shot. Now that I’ve done it, I feel like I have a lot more confidence and could do it again. Hopefully I’ll get the chance to do it again in my career. It was a great experience; I feel really fortunate that I was able to do that.”

Tanner already has a job with a firm lined up post-graduation in May, so she may continue to do some work in employment law, but more importantly she says this experience taught her how much she enjoys taking on pro bono cases.

“Service has always been important to me,” she said. “That’s certainly one reason that I chose to go to SLU for my undergrad and for law school. I was a teacher before [law school]. When I started law school, I was worried that I would not be fulfilling that desire I have for community service. But in this experience I certainly felt like I was serving, and that as a lawyer I can continue to serve."