It was late in the afternoon on Thursday, January 30, when Professor Brendan Roediger handed 3L Gage Barrows a case set for trial on the upcoming Monday. 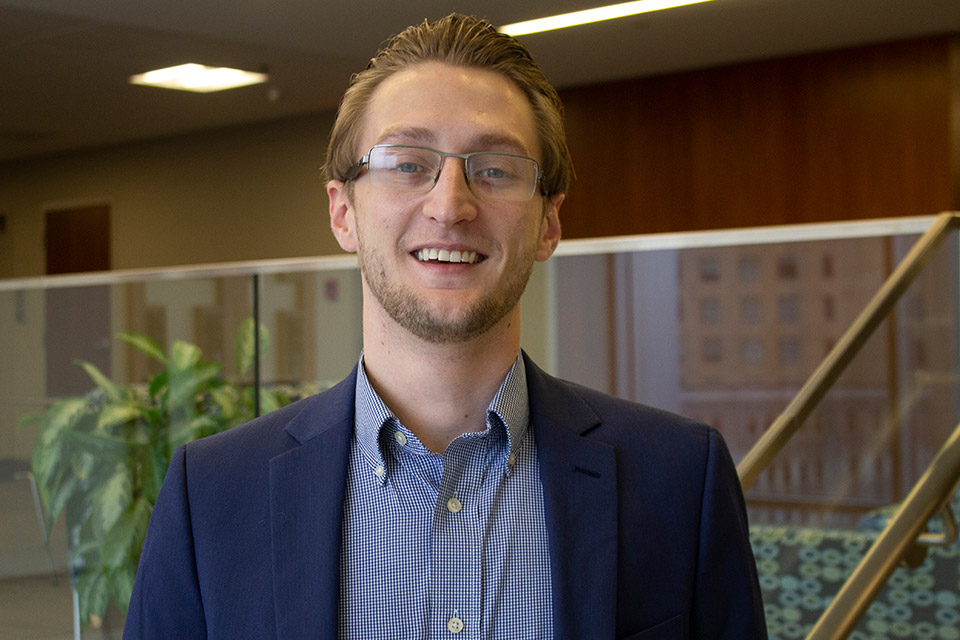 Gage Barrows is a third-year law student who is in his second semester working in the Legal Clinics. Photo by Adam Westrich

The case involved a woman who, as a result of a domestic violence incident in which she was the victim, was being evicted. Her housing was subsidized by a Department of Housing and Urban Development (HUD) Grant. If the eviction was successful, she could not only lose her apartment but would lose her HUD benefits for life;  the School of Law Legal Clinics were her last hope.

“We got this case at a very busy time for the clinic,” Roediger said. “I told Gage that he would have to do most of the leg work on his own and would be working nonstop until the trial. He agreed without hesitation.”

“This is the reason I signed up for clinic,” said Barrows on why he agreed to the case on such short notice. “This was a chance to really help someone and make a difference in their life. I could not pass up the opportunity.”

With the guidance of Prof. Roediger, Barrows set to work preparing for the trial in three days. One tool he had at his disposal was a new statute worked on years ago by the clinic but only recently passed. The statute (MO 441.920) states that no tenant or lessee shall be evicted from the premises as a direct result of the fact that the lessee is, has been, or is in imminent danger of becoming a victim of domestic violence.

This would be one of the first to apply the statute. With former clinic students responsible for the statute, it seemed like a good sign to Barrows.

“If this case doesn’t qualify for the statute, then what does?” he said.

Barrows, along with fellow clinic student 3L Ashton Dietrich, was able to meet with his client the next day and contacted opposing counsel to alert them of her new representation and his intent to defend his client to the best of his ability.

Before close of business on Friday, Barrows and Roediger received an email from opposing counsel dismissing the case. Their client kept her home.

“We work on a lot of big cases in the clinic,” said Barrows. “This may be a small case, but it had a big impact. We changed her life. That will stay with me. Our mere presence as attorneys on the case changed the outcome for our client.”