Over 40 years. That is how long Professor Emeritus Roger Goldman, the Callis Family Professor of Law Emeritus has relentlessly pushed for police reform through decertification programs. That is longer than many of his law students have been alive.

His goal has remained constant: to change traditional methods of dealing with police misconduct so that officers who are fired from one department cannot get rehired by another. 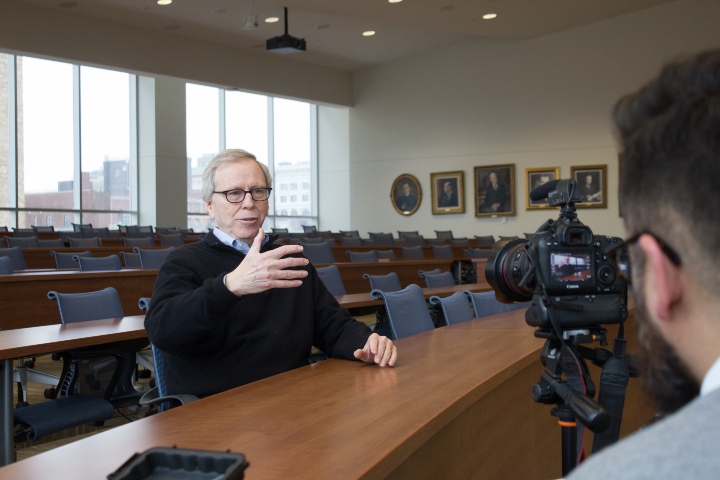 His quest began in the late 1970s with the case of a young man who was killed in police custody in Maplewood, Missouri, after the officers played a game of Russian Roulette during his interrogation. The lieutenant in question was fired, but he was subsequently rehired by a smaller police department in North St. Louis County and later shot and killed an unarmed Black man while off duty.

This caught Goldman’s attention, and in the decades that followed he has collaborated with law enforcement officials, civil libertarians and state legislators across the country to change laws in order to get “repeat offender” officers off the streets. His proposal advocating for a federal database tracking police misconduct became a recommendation in the 2015 report by President Barack Obama’s Task Force on 21st Century Policing.

With death at the hands of police officers once again on the national stage, Goldman finds himself back in the spotlight.

Since his retirement five years ago, Goldman has devoted much of his time working with the handful of states that still do not have police certification programs. This includes Hawaii, California, New Jersey, Massachusetts and Rhode Island. And he is making some serious headway. In June, Massachusetts Governor Charlie Baker signed into law a piece of legislation that creates a system to license and decertify police officers in the state. Goldman and his colleagues were credited for their contribution, which was recently highlighted in the Boston Globe.

The standards can vary widely. While the majority of states lay out various “decertifiable offenses,” some only allow decertification if an officer is convicted of a crime, Goldman said. He applauded the proposed inclusion of the State Police under Massachusetts’ system, but questioned whether under Baker’s language, sexual misconduct would fall under the types of offenses that could cost an officer his or her license.

That’s such a common reason for decertification” elsewhere, Goldman said.

While many people would consider this a big win, Goldman is not ready for a victory lap.

“Not there yet, but getting close,” he said.

Goldman is not one to back down from a challenge and appears to be putting his foot on the gas in the fight to develop certification standards for the remaining states. One of his favorite approaches is working directly with local media to drum up attention around the issue. He often calls reporters just to discuss the certification problem. He will put them in touch with other folks, lead them to the right source or study or just talk. His goal is to get them to shed light on the topic, not that he be quoted necessarily. Of course, that happens in due course. In fact, at the end of June Goldman was the quote of the day in the New York Times.

If the state can take away the license of a barber for misconduct, surely it should be able to do so for a police officer.”

ROGER GOLDMAN, an emeritus law professor at St. Louis University, on states like New Jersey, which does not require licenses for police officers, limiting its ability to track and prevent improper behavior.

Quotation of the Day: An Officer Fired, Then Hired Again and Again, June 24, 2020

It is a line that anyone who has spoken with Goldman on the topic has heard before. It is his own rallying cry. His own way to start this grassroots movement. It is something he will shout from the rooftops until every state falls in line. Goldman may have gotten started decades ago, he may have retired years ago, but he is nowhere near finished.

By Jessica Ciccone, Director of Communications