In January 2020, three SLU LAW students were able to celebrate an astounding achievement: helping exonerate a man who was falsely imprisoned for nearly three decades. 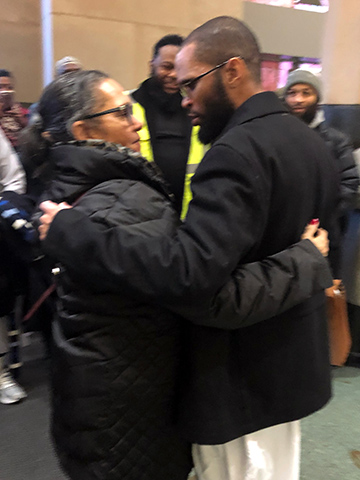 Theophalis Wilson (right) pictured with his mother on the day of his release from prison. Photo submitted by Jennifer Merrigan

2L Kristen Spina, 3L Angela Torblaa and 3L Jackie Coffman worked during the summer and fall of 2019 on the case of Theophalis Wilson, a Philadelphia man who served 28 years in prison for a triple murder he did not commit.

Spina and Torblaa were the first to join the case during their summer internships at Phillips Black, a nonprofit, public interest law firm that partners with SLU LAW as a site for student field placements.

The two students aided Jennifer Merrigan, a principal attorney with the firm and adjunct professor at SLU LAW, in combing through a mountain of previously unseen evidence that was hidden by prosecutors during Wilson’s first trial in 1993. They were supervised locally by Phillips Black attorney Kristin Swain ('15). 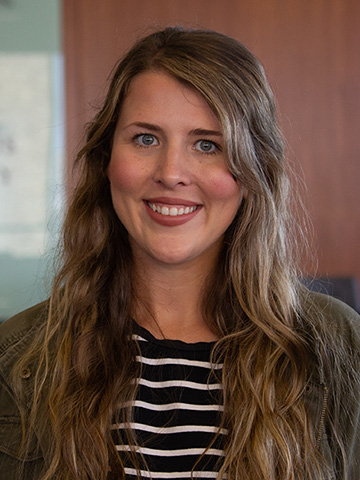 “Our team received over 42,000 pages of discovery from the DA’s office. I processed many of these documents and synthesized their content to make our investigation more manageable,” Spina said.

Coffman, who learned about Wilson’s case during her fall 2019 semester field placement with Phillips Black, continued to pour over the thousands of documents after Spina and Torblaa completed their internships.

“This was my very first assignment there. I was assigned to look through one of a few dozen boxes of documents that had been sent over by the Philadelphia DA's office. There were several thousand documents to go through. I went through each document and kept a log of anything that may be significant to our claims,” reported Coffman.

While reviewing the documents, the three students found substantial evidence of prosecutorial misconduct.

“After digesting many of the discovery documents, I focused primarily on one component of our investigation: a key witness in the original trial. I conducted factual investigation and drafted a narrative for our team’s brief outlining various Brady violations and prosecutor misconduct regarding this key witness,” Spina said.

This new evidence was presented to the Philadelphia Common Pleas Court during Wilson’s re-sentencing trial in January 2020 and played a major role in the court’s final decision. On Jan. 21, Wilson was exonerated and released.

Since their internships with Phillips Black, Spina, Torblaa and Coffman have continued their studies at SLU LAW with a fresh perspective.

“An emphasis throughout my education at SLU LAW has been on justice and working for the good of others. This case was a perfect opportunity to put those lessons into practice, along with the excellent training I’ve received in legal research and writing,” Torblaa said.

The three believe this case is an example of the justice system at both its best and worst. 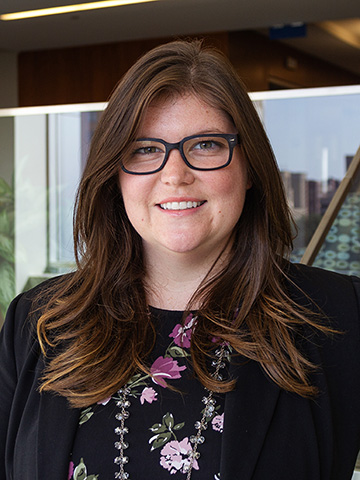 “For me, this case was a deep dive into understanding the ethics of prosecution and police work, and what the worst-case scenario can be when those ethics are breached. The circumstances that led to Theo's incarceration are still deeply troubling, although I am thrilled he has finally been exonerated,” said Coffman.

“Working on this case has reinforced my dedication to representing clients subjected to the harshest penalties in our criminal justice system,” Spina continued. “What an incredible case to begin with, one where a man, wrongfully imprisoned for almost three decades, has been set free and received the justice he desperately deserved.”

As a law school driven by a social justice mission, it is no surprise that many students are interested in post-conviction work and inmates facing life in prison or death row. Through the Phillips Black partnership with attorneys Kristin Swain ('15) and Joseph Welling ('16) located in SLU LAW’s Scott Hall, students have been able to secure hands-on internships that focus on real-world casework, crisis litigation, and post-conviction proceedings.

It is through these internships that people like Theophalis Wilson are able to finally see the justice they deserve.

Saint Louis University School of Law was founded in 1843 and is the oldest law school west of the Mississippi River. The strength of the faculty, breadth of course offerings and extensive clinical and professional skills experiences provide students with a well-rounded legal education. The School of Law’s rich history consists of strong connections to the community and a long tradition of public service. SLU LAW’s location in the heart of downtown St. Louis offers students unparalleled access to leading law firms, courthouses, corporations, government agencies and nonprofit organizations — and a unique opportunity to see the law in action. For more information, visit http://slu.edu/law.

Phillips Black consists of independent practitioners collectively dedicated to providing the highest quality of legal representation to prisoners in the United States sentenced to the severest penalties under law. Phillips Black further contributes to the rule of law by consulting with capital counsel, conducting death penalty clinical training, and developing research on the administration of criminal justice.

Phillips Black is a nonprofit, public interest law practice. It provides a structure for independent practitioners to collaborate seamlessly, share costs, and collectivize scarce resources for carrying out work that otherwise would not be undertaken. For more information, visit http://phillipsblack.org/.