SLU LAW third-year student Reid Simpson was named a semifinalist for the Law Student of the Year award by National Jurist magazine.

The publication received nominations from law schools across the country and named one student of the year and six semifinalists. The students were featured in the magazine’s Spring 2021 issue. 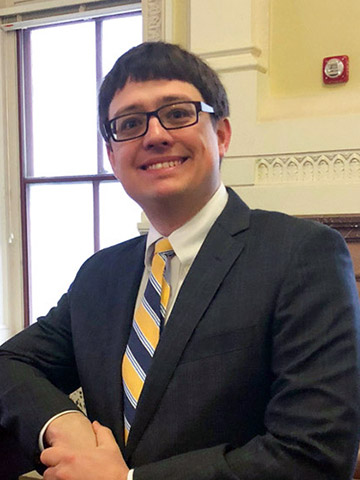 Simpson was a 2L and father of 18-month-old twins when the pandemic first upended life in the United States in March of 2020. His wife was a surgery resident at Barnes Jewish Hospital, and they worried for her safety in the face of the unknown threat.

Simpson reached out to SLU LAW administration and, through a quick succession of emails, helped initiate a task force with the Bar Association of Metropolitan St. Louis (BAMSL) to assist frontline health care workers in creating estate plans, as their concern to “get their affairs in order” became quite pressing.

What began as a Zoom informational meeting for around 20 local medical residents led to more than 75 probate attorneys volunteering pro bono services for dozens of health care workers, helping to give them and their families peace of mind during the unprecedented crisis.

"This honor is equally split between three parties: mostly among the front-line healthcare workers such as my wife who are the reason that the unbelievable events of the last year are not substantially worse than they are; the diligent leadership at SLU LAW, who were quick to couple an idea from an email to action steps; and the diligent SLU LAW alum network and resolved BAMSL community that was quick to pair need with action," Simpson said.

St. Louis truly is an amazing city and a more amazing legal community."

"St. Louis truly is an amazing city and a more amazing legal community. I am thrilled and honored to receive recognition as the middleman between these three forces. I am happy that SLU LAW’s name appears next to mine in the National Jurist as it is every bit as deserving, if not more so, than I am of this award.

"From the leadership of Deans Johnson and Baris to the individual mentorship of faculty advisors such as Professors McCormick, Bodie and Cherry (the advisors of my concentration), I would never have had the courage or motivation to attempt such a large collaboration that ended up being as influential to as many as it did," Simpson continued. "I will be eternally grateful to SLU LAW and look forward to the opportunity to return any favor in the future."

After graduating from SLU LAW, Simpson will join the law firm Frankel, Rubin, Klein, Payne, & Pudlowski P.C., where he previously served as a law clerk in its corporate litigation department, as a full-time associate.