Law School Experts Weigh in on the Ukrainian Conflict

The city of St. Louis and the world was shaken when, 8,741 kilometers away, the Russian Federation invaded Ukraine on February 24, 2022. From protests at the Gateway Arch to Saint Louis University School of Law’s own talk sessions, the response to the “largest conventional military attack in Europe since World War II” has been widespread. The Center for International and Comparative Law hosted two open-meeting teach-ins by Professors Monica Eppinger and Afonso Seixas-Nunes to inform students and staff about the war.

On March 3rd, 2022, Prof. Monica Eppinger, a former U.S. Embassy to Ukraine official, covered some facts key to understanding the developing situation. “Ukraine: What You Need to Know” was focused on the history behind the conflict, the current events taking place, the experience of contemporary Ukrainians, what course the Ukrainian government seems to be pursuing, and what it could mean for the United States.

Prof. Eppinger spoke about the history of Ukraine and Russia and started with Ukraine’s independence in 1991 after the dissolution of the Soviet Union. From then, she explained major historical events and the country’s geography. With a map handout she provided to the group, she noted the names and locations of important cities that should be given public awareness during the current Russian invasion of the country. Additionally, during this portion, facts were highlighted about Ukraine, such as its standing as the most bilingual country in the European area. 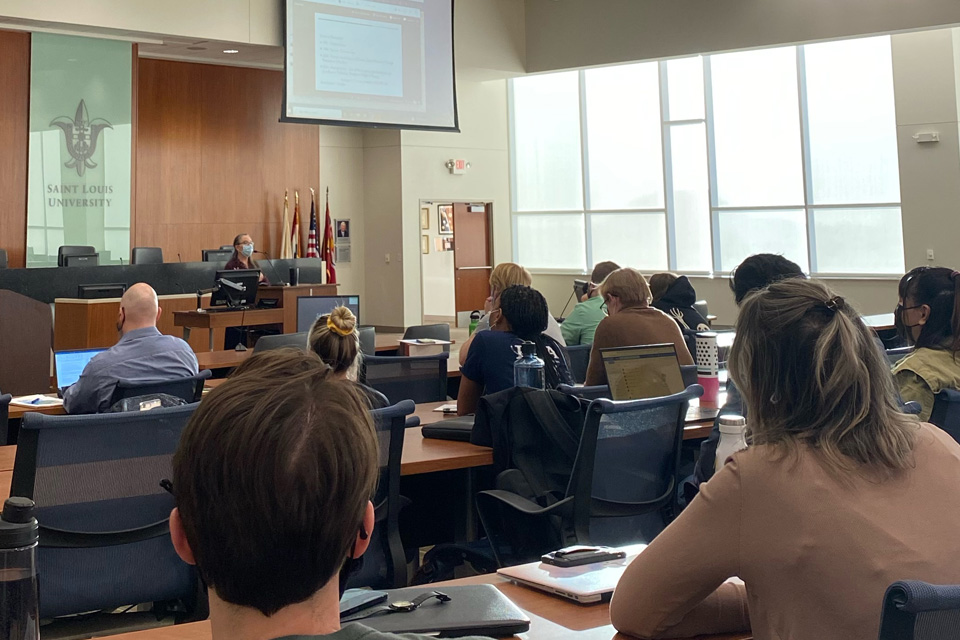 Towards the end of the presentation, Prof. Eppinger spoke emotionally of her own personal involvement. She mentioned friends who live in the country and their statuses. Prof. Eppinger’s friend, Oleksandr “Sasha” Merezkho, visited in STL in 2019 to attend the annual Symposium and has written a paper for the Law Journal. Now, he has decided to stay in Ukraine to assist and Prof. Eppinger maintains contact with him during this situation. She became moved as she said that, although she was not originally a Volodymyr Zelenskyy fan, he is currently the “best president in the world.” Although, upon a student asking her to state her opinion of the coming days, Prof. Eppinger admitted that she believed Zelenskyy is a “dead man walking, and he knows that.”

On March 7th, the second session titled “International Law: What You Need to Know” took place. It was run by Professor Afonso Seixas-Nunes, who is a leading expert on the international law of armed conflict. This session covered what the law says about war, the acts that the law addresses and whether President Vladimir Putin is breaking international law.

Prof. Seixas-Nunes spoke about the dual perspective of Russia and Ukraine in the international conflict. Like Prof. Eppinger, the history of Ukraine and the impact of this history on the current legal and political sphere began the session. Prof. Seixas-Nunes addressed various national stances including that of Venezuela and Myanmar. He covered the progress of national stances on the condemnation of Russia’s actions with Crimea in 2014 to this conflict. He spoke about his own participation in a very recent session in London where the idea of the special court was established. Aided by a PowerPoint, he addressed International Law and the Use of Force, International Humanitarian Law, and International Criminal Law. 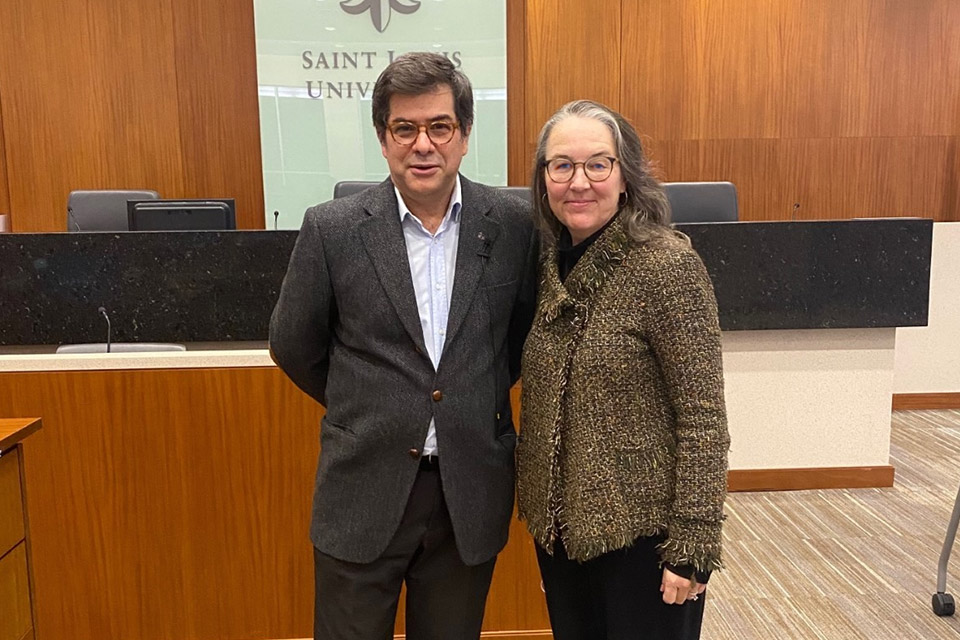 Professors  Afonso Seixas Nunes and Monica Eppinger in the coutroom following their presentation on the war in Ukraine.

“Just become something is illegal, doesn’t mean it’s a crime,” Prof. Seixas-Nunes said. He spoke about the Ukrainian right to self-defense, as well as the Russian expectations going into the conflict. He proceeded to elaborate on why there cannot be collective self-defense. There was no permission of the U.N. Security Council because permanent member of the Security Council (Russia) vetoed this. Other topics discussed were the possibility of nuclear war, the global response to Russia, the Russian response to protests, the status of who classifies as a ‘civilian’ in Ukraine, proportionality and perspectives of international bodies.

For more on the Center for International and Comparative Law

For a profile of Professor Eppinger in the University News

For more on the St. Louis perspective of the war in Ukraine