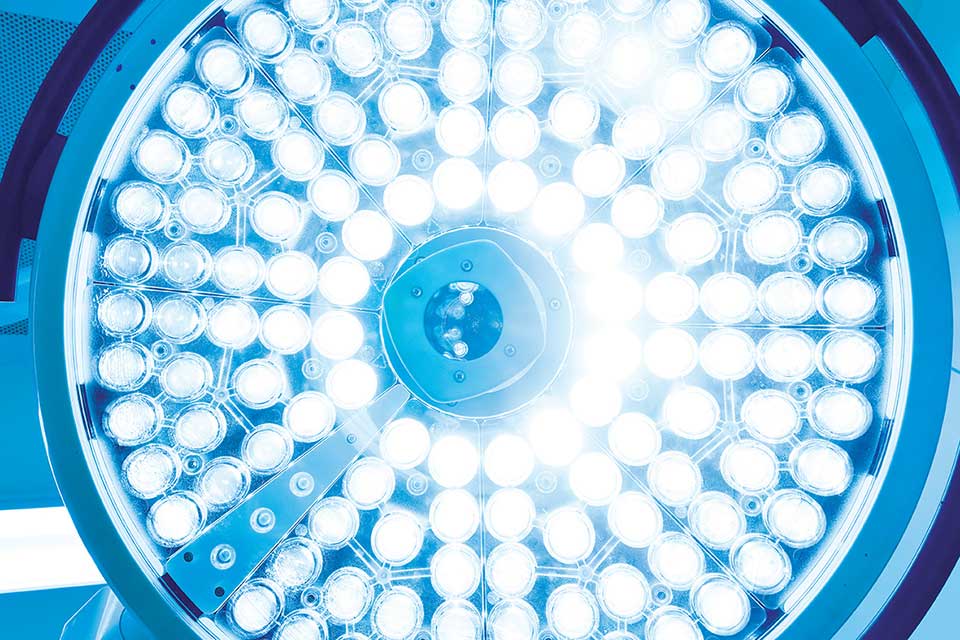 Ahmad Odeh, a rising M3 student, was diagnosed with Hodgkin’s lymphoma and acoustic neuroma in July 2020, one week before moving from Arizona to begin medical school. “I remember attending a Zoom meeting with my new classmates in early July, three weeks before orientation began, and everyone was so excited and introducing themselves, and I remember just saying to my administrators and class, ‘I’m sorry, but I have surgery tomorrow to remove a possible malignant lymph node to confirm a possible cancer diagnosis, and I was just diagnosed with a brain tumor.’ I didn’t know what I was going to do,” said Odeh. A week later, his Hodgkin’s lymphoma diagnosis was confirmed.

Odeh recalls deciding to follow his dream of medical school, and regardless of the outcome, he knew he needed to try, but when he arrived in St. Louis, his PET scan determined he was at stage 4. “I wrestled in high school, and a big part of wrestling was pushing through adversity and believing that you can persevere in the tough times. I knew I wanted to test myself and my limits. If I could push myself through this, I can push myself through any part of life.”

“The administration was prepared to stand by me every step of the way, but they needed to make sure I was aware that I would be held to the same standards as every other medical student. I constantly communicated with the deans and let them know when I was struggling, and they were incredibly supportive and accommodating whenever possible. We would meet monthly to check on my progress and listen to any concerns that I had. On my end, I had to plan. I had chemo every two weeks on a Wednesday for 12 sessions. I would feel awful and unable to study from Wednesday through Saturday, and then Sunday, I would feel great and recovered. For the following week and a half, I needed to be as efficient as possible. If I had an exam soon, I needed to study constantly for a week and a half in preparation for chemo week because I knew for half of the next week, I could not study. I found that if I consistently studied every single day that I could and stayed organized and disciplined, I could get in the rest I needed for the four days after chemo to give it my all for the next week and a half.”

Odeh had surgery nine months after starting medical school to remove the brain tumor with a near total removal. He did lose hearing in his right ear and will receive a hearing aid soon. He has been in complete remission since the second month of his aggressive six-month chemo plan, and he gets yearly PET scans and an MRI every six months for his brain tumor. The scans show the tumor collapsed within itself and has minimal activity.

Odeh is looking forward to starting clerkships just a year and a half into medical school. The curriculum has evolved, so the traditional first two years are compacted into a year and a half. Ahmad said, “although the amount of material is insane and you feel like you can never catch up, you get used to the chaos and the never-ending to-do lists, and starting clerkships so much earlier is an incredible opportunity and one that I am truly excited for.”

His love for the sciences and helping people is the driving force that pushes Odeh to become a doctor. In his experience, he says, “recovering from brain surgery and going through chemo was very tough, and the side effects were painful and tough on me. But in the end, I came out of it feeling better physically, mentally, and emotionally and hope to one day bring this experience to my patients.” Odeh hopes to go into ENT and specialize in neurotology to remove brain tumors like his.

From the time he was 16 years old, Odeh has found clarity in writing and has a collection of poems. Through challenging times, Odeh puts pen to paper and documents his thoughts through free poetry. He says this helps him gather his thoughts and overcome his emotions. In much of his poetry, he has put himself in the shoes of people he has met as well, and he reflects on the experiences of others and his own. Additionally, Odeh has been drafting a book documenting his experiences in medical school and the events leading up to his cancer diagnosis and post-diagnosis through medical school. His goal is to publish his book upon graduation, under the well-earned title of M.D.

“I was gifted a life my mom was encouraged to abort. She was told to avoid this pregnancy…that there would be so much wrong with me…but God had other plans. I know that I am here for a reason; my mom and her pregnancy experience are why I chose medicine. I believe that helping women navigate difficult pregnancies, like what she experienced with me, is my purpose in life.”

April Lewis, M3, grew up in Jennings, Missouri. According to crimegrade.org, Jennings is in the seventh percentile for safety, meaning 93% of cities in the U.S. are safer. “I grew up around a lot of violence, where kids were prone to drug use and teen pregnancy. Where I come from, people don’t really do things like go to medical school,” said Lewis. “Many of us are not afforded the luxury of pursuing the things you dream of.”

Lewis grew up as an only child to a single parent. She says her mom refers to her as a walking miracle; taking this to heart, she has promised herself to seize the opportunities in the world to fulfill her purpose in life.

“I have always had to advocate for myself and for resources that I knew would contribute to me being successful; it started young for me, then I went to Spelman College, where they trained us to go out and change the world. I feel my time there cultivated me as a leader and gave me the tools to advocate for people in a way they might not have the confidence or voice to do so for themselves,” said April. “Being a leader isn’t always about being in front; great leaders learn from others and equip others with the tools necessary to reach out for themselves to the proper channels for change.”

Lewis is a co-class president and former co-president of the Student National Medical Association (SNMA), Saint Louis University School of Medicine Chapter. She strives to make the entire class feel represented when it comes to diversity. “It’s important to make sure that the students you represent, especially those from different marginalized communities, feel safe, learn in a welcoming environment, and are afforded the education they deserve,” said Lewis. SNMA is a national organization of underrepresented individuals in medicine who ensure students have the tools they need to matriculate through a medical program and successfully give back to the communities they came from, encouraging others from their demographic to see themselves in medical care positions.

Lewis added that black maternal mortality is real, and it is climbing. Some women do not have access to adequate resources or prenatal care, are fearful of what a doctor’s visit may entail, or just do not know where to start. April aspires to be an OB/GYN and specialize in maternal-fetal medicine to help women, like those from her childhood community, get the early care they need, make the right decisions for themselves and their babies, and advocate for those at higher risk of pregnancy complications.

Recently, Lewis practiced the care she hopes to provide her future patients in the Labor of Love program, overseen by Dr. Katherine Mathews, an OB/GYN, and instructed by local doulas. In this course, a support group of students provided doula services to disadvantaged pregnant mothers in the local St. Louis community. “We created birth plans and supported the mothers through their delivery by providing emotional support, comfort measures, and advocated for them during their birthing process. We provided an array of support for these mothers pre- and post-natal that gave me an appreciation for the entire pregnancy and birth process. It was an invaluable experience to provide them the support and information they needed to navigate their pregnancy successfully,” said Lewis. She even keeps in touch with some of her past doula clients today.

“I look forward to my future career in medicine; there is so much to look forward to, but also, I will not forget where I came from and the journey that it took for me to get here. One day, I hope to look back and see changes I fought for come to fruition so that a medical degree can be more attainable for the students who come behind me. I look forward to seeing those changes made, for the better,” said Lewis.