After more than 25 years working her way through the ranks of the health care industry, Tracy Omer (MHA 2015) has achieved a new milestone: System Manager of Continuous Improvement at SSM Health, a Catholic, not-for-profit health system in the Midwest. Omer began her career as a nuclear medicine technologist on the front-lines of healthcare delivery but recognized she needed a pathway to broaden her perspective of the field. Omer’s search led her to the Executive Master of Health Administration (EMHA) program at Saint Louis University (SLU).

“I wanted to expand my knowledge base and my horizons,” Omer recalled. During her time at Saint Louis University, Omer not only excelled in her academic studies but also co-authored a research paper with Dr. Mark Gaynor on the topic of electronic health record security (Gaynor et al, 2016). “The people involved in the SLU program were instrumental to my success, and I’m really appreciative,” Omer said. 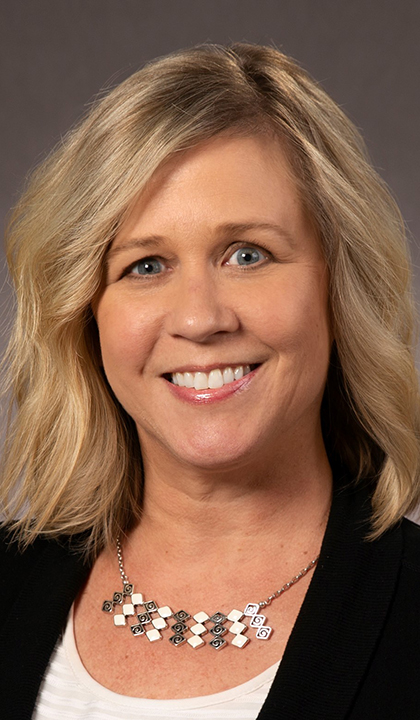 After earning her EMHA, Omer leveraged the SLU network to connect with alumni who worked at SSM Health and ultimately secured a position on the continuous improvement team for SSM’s St. Louis region. SSM Health encompasses 23 hospitals and numerous inpatient and outpatient services across Illinois, Missouri, Oklahoma, and Wisconsin.

Over the past few years, Omer has been involved with important changes in the way SSM approaches improvement, including the development of the SSM Operating Model. The implementation of the model has included a culture change, in which the continuous improvement team has shifted from being the people who go in to solve the problems to coaching leaders to help their teams address emerging  problems through daily improvement.

“In the past, our approach to continuous improvement was siloed across regions and across hospitals within regions,” Omer explains. “Now, our leadership structure has changed, which has been a huge win for our team. We’re better aligned across the system, and we’re sharing best practices and lessons learned,” Omer adds.

“Take advantage of every opportunity and don’t limit yourself,” she says. The SLU alumni network is huge and incredibly supportive. It is not only helpful to have those connections coming out of school but also once you are established in your career. You can still leverage SLU connections to help your organization.”

About the College for Public Health and Social Justice