Research on Healing Justice and Equity

Faculty affiliated with the Saint Louis University Institute for Healing Justice and Equity are engaged in a variety of research projects, some of which are listed below.

"Racism is a Public Health Crisis. Here's How to Respond."

The Institute for Healing Justice and Equity, in collaboration with The Justice Collaboration Institute, published its report addressing racism as a public health crisis and the steps that should be taken to respond to this crisis.

Racial disparities in health and well-being are well documented. In the past, most governments attributed racial health disparities only to specific instances
of racism, such as redlining or residential segregation. But the COVID-19 pandemic and recent police violence have laid bare a system of racism that drives inequality in all aspects of American life, including education, employment, healthcare, housing, and law enforcement.

Declaring racism as a public health crisis is an important first step. Doing so acknowledges that racism exists and that government has a duty to dismantle the system of racism, instead of leaving the burden on individual victims of racism to file lawsuits. Yet a declaration, without more, is not enough.

Learn More About "Racism is a Public Health Crisis. Here's how to Respond."

The whole team is involved in the Robert Wood Johnson Foundation grant entitled, “Are Cities and Counties Ready to Use Racial Equity Tools to Influence Policy?”

Amid a growing national conversation on equity and social justice, city and county governments are using tools to identify racial and ethnic disparities in their communities. These insights can then inform the development and implementation of laws and policies designed to minimize disparities and maximize positive impacts on racial and ethnic minorities.

Nearly 200 city and county governments have adopted tools developed by GARE/Race Forward, Living Cities, PolicyLink and PERE, but no one has yet cataloged whether the adoption of these tools has resulted in changes to laws and policies related to employment, housing, access to health care and childhood education — key social determinants of health.

Learn More About: "Are Cities and Counties Ready to Use Racial Equity Tools to Influence Policy?"

The data collected will be used to develop a comprehensive map and database that describes the city/county, the type(s) of racial equity tool(s) adopted, and the stages of readiness to engage in law and policy change. It will also be used to develop an adoption map to delineate where governmental adoption of racial equity tools influenced developments and modifications in laws and policies related to at least one social determinant of health.

The Justice Fleet is a mobile social justice museum fostering healing through art, dialogue and play. 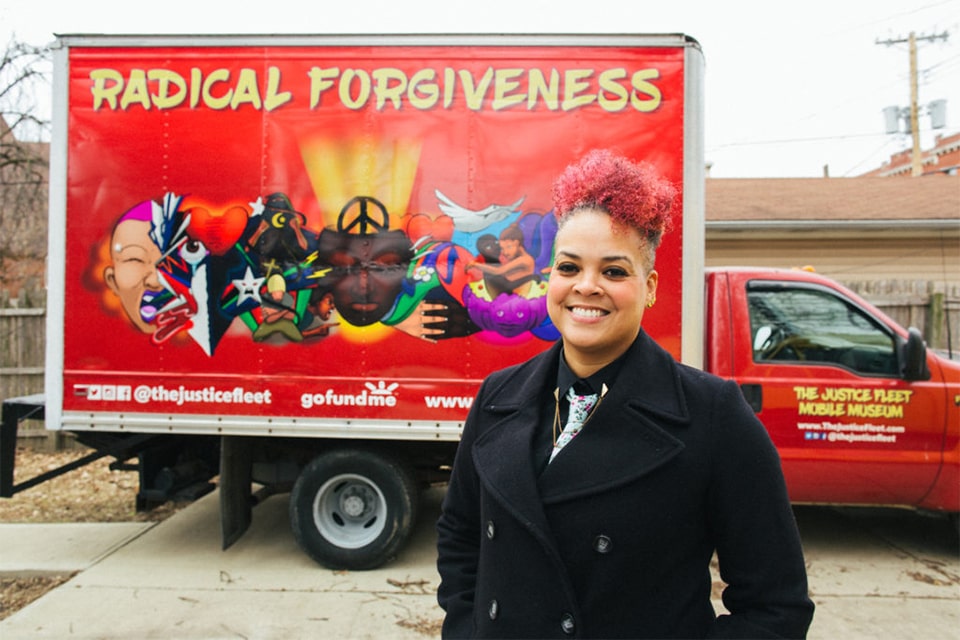 Housed inside of a box truck, each mobile exhibit ventures into various neighborhoods to engage community members in discussions about implicit and explicit bias, social justice, and empathy.

The first exhibit engages community members in a dialogue and art activity about Radical Forgiveness — the profound notion that we don’t have to live with fear, pain, hostility or injustice because we have control over the way we perceive, understand and act. Radical Forgiveness is a fluid and deliberate process that allows us to heal the wounds from injustice.

The second exhibit, Radical Imagination, asks participants to play in an effort to remember how to imagine beyond constraints in an effort to develop ideas for more just community living.

The third exhibit, Transfuturism, is a photography, oral history, and Afrofuturistic art-activism project and exhibit. First, the narratives and lived experiences of trans and gender fluid people of color are photographed and recorded. Their photographs and words are sent to a trans artist in residence named Wriply Bennet who transforms them into super heroes. Their super hero image is then painted on a large canvas dwelling in an environmental home that captures the essence of their interview. The exhibit will showcase the photographs, interview quotes, super hero sketches, and paintings in addition to an activity that asks participants to think about and create their gender galaxy via provided art supplies.

The fourth and fifth exhibits will be a Mobile Grief Garden, where people can grieve together, in a safe space, after public tragedies, and Black Girl Magic, a play space dedicated to uplifting black girls.

For more information, or to book the fleet, visit www.thejusticefleet.com.