The start of 2021 marked the official appointment of Barnali Gupta, Ph.D., as Edward Jones Dean of the Chaifetz School of Business. In the role, Gupta will provide leadership for Saint Louis University’s nationally ranked business school which saw strong graduate enrollment growth, an uninterrupted fall semester of on-campus and hybrid course delivery and reaccreditation by the Association to Advance Colleges and Schools of Business in 2020.

Gupta’s appointment follows a national search which ended in her unanimous recommendation for the position in September. Gupta joins the Chaifetz School following a long tenure with the Farmer School of Business at Miami University, most recently serving as Associate Dean for Curriculum and Professor of Economics. 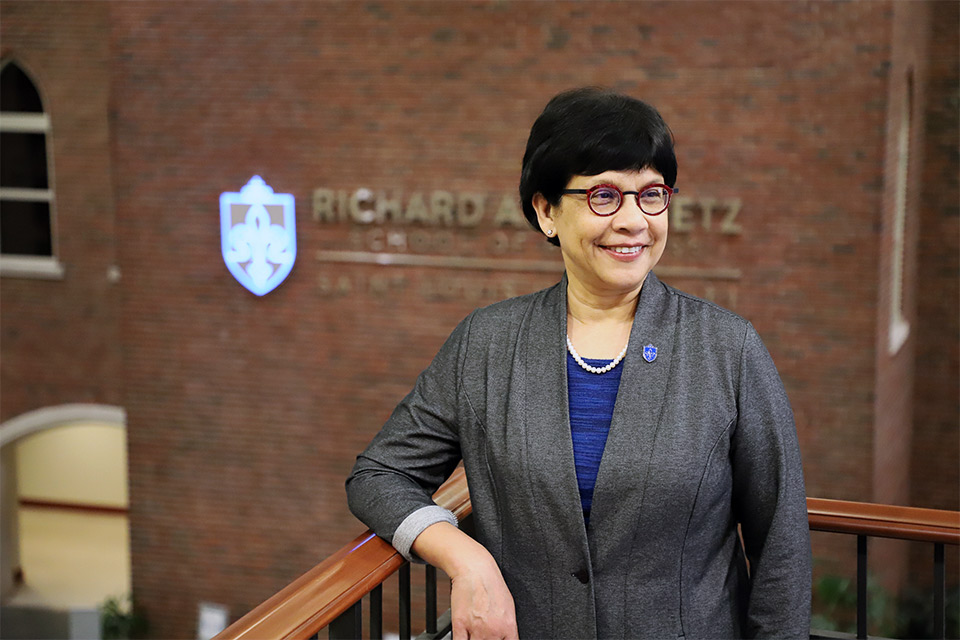 Barnali Gupta, Ph.D., pictured here at the Richard A. Chaifetz School of Business. Gupta began her term as Edward Jones Dean this month.

It’s not an easy time to start a new job in a new city, but Dr. Barnali Gupta is more than up to the task. Gupta, whose term as Edward Jones Dean began January 1, arrives at SLU with nearly 30 years of experience in economics and academic administration.

Before coming to the Chaifetz School, Gupta spent over 27 years in the Farmer School of Business at Miami University, where she taught courses in economics and received recognition for her high-quality scholarship and excellence in teaching. As an economist and researcher, Gupta specializes in industrial organization and applied game theory.

During her time at the Farmer School, Gupta broke a few barriers: She became the first female full professor of economics in 2006, and the first associate dean of international origin in 2016.

An international approach to her work has been a key factor in Gupta’s success. “A global mindset and intercultural competency are my lived experiences,” she says. Gupta speaks multiple languages, grew up in Mumbai, Kolkata and New Delhi, and notes that attracting and empowering diverse teams is one of her core values.

Gupta is an exceptionally dedicated professional, and has implemented a number of successful academic programs. Among her extensive accomplishments as an educator and administrator, Gupta has executed the creation of a business management master’s degree designed exclusively for non-business majors, launched an innovative new skills-based program for first-year business undergraduates, and piloted numerous innovative technologies including new pedagogies for team-based global virtual learning. She promises to bring that same energy and innovation to the Chaifetz School.

“As Dean, it will be my strong priority to ensure an uncompromising commitment to excellence that will position the Chaifetz School to deliver impactful scholarship and innovative programs. Our school will be instrumental in contributing to the next generation of business leaders who are ready and committed to a mission of excellence, purpose and positive change,” Gupta says.

Gupta highlights the Chaifetz School’s “high quality undergraduate and graduate programs” and “impactful centers such as the Boeing Institute for International Business, the Chaifetz Center for Entrepreneurship, Emerson Leadership Institute and the Center for Supply Chain Excellence” as several of the school’s key strengths. She also deeply admires the school’s faculty for their dedication to both scholarship and teaching.

As she begins her new role, Gupta is looking forward to getting to know SLU and the “vibrant and entrepreneurial” St. Louis community.

“I am so grateful for the warm welcome and support from an incredibly committed team of faculty, staff, students, alumni and friends of the Chaifetz School of Business and Saint Louis University,” Gupta says. “I am excited and honored to join this community. Together, we are ready for 2021.”

About the Richard A. Chaifetz School of Business

Founded in 1910, the Richard A. Chaifetz School of Business at Saint Louis University has shaped the future of industry for more than a century. As the oldest business school west of the Mississippi, the Chaifetz School has built a reputation as a leader in business education with seven undergraduate and graduate programs nationally ranked by U.S. News & World Report.