Students and Companies Turn Out for Chaifetz Career Day 2021

Students at the Richard A. Chaifetz School of Business at Saint Louis University met with recruiters from several top companies on September 29 as part of Chaifetz Career Day.

The event, which was held in the atrium of Cook Hall, gave students the opportunity to make connections and network with recruiters from a wide variety of industries in the St. Louis area and throughout the country. A total of 26 companies attended the event.

Marissa Oxendine has been coming to the annual event since her freshman year, and she credits the networking opportunities and other resources from the Chaifetz School with helping her get a job lined up after graduation.

“When I was a freshman, I had a mentor who was a senior, and he showed me how to navigate a career fair,” Oxendine said. “I’ve been to every career fair since.”

Now a senior studying international business and data analytics, Oxendine says she met a recruiter for Ernst & Young at a previous Chaifetz Career Day and stayed in contact with them throughout her undergraduate years. After practicing lots of informal interviewing through SLU Connections, Oxendine accepted a consulting role with the firm’s Charlotte office nearly six months before graduation. 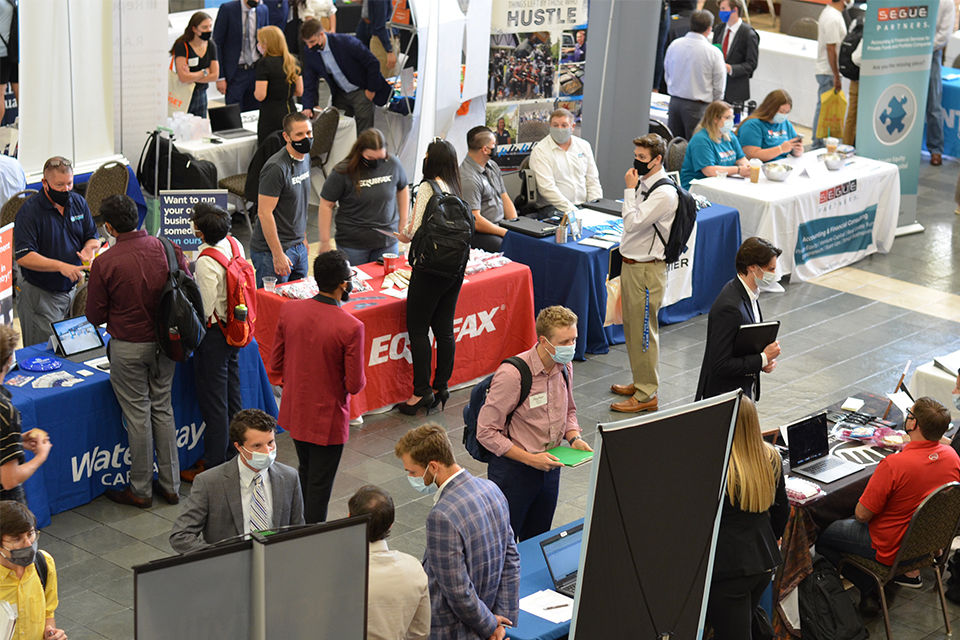 Students at the Richard A. Chaifetz School of Business met with recruiters from several top companies as part of Chaifetz Career Day.

Blase Daugherty, a senior studying finance, attended the event on behalf of Maryville Consulting in Clayton, and credits events like this for helping him secure his current position. After receiving a mentorship program through the Valerie A. Davisson Career Resources Center, Daugherty interned with Maryville over the past summer. After getting to know the CEO of the company during the internship, Daugherty was offered a full-time position with Maryville in August, and will begin his new role with the firm next summer after graduation.

“This is a great chance for you to get your face out there,” Daugherty said. “College is all about making connections, and Chaifetz Career Day is the perfect way to do just that.”

After a year that saw many in-person events canceled or moved online due to the pandemic, students were grateful to be able to make face-to-face connections and practice their networking skills once again.

“I’m just grateful that SLU brings these companies together for us,” said Zoe Pezold, a senior studying financial analysis. “It expands our network and helps give us a direct entry into these companies.”

Founded in 1910, the Richard A. Chaifetz School of Business at Saint Louis University has shaped the future of industry for more than a century. As one of the oldest business schools west of the Mississippi, the Chaifetz School has built a reputation as a leader in business education with eight undergraduate and graduate programs nationally ranked by U.S. News & World Report.