Elyse Lewandowski, a senior majoring in Finance and minoring in International Business and Data Analytics, spent her summer interning with the Federal Reserve Bank of St. Louis—one of 12 regional Reserve Banks. She worked under the Financial Management and Procurement sector, and will continue her internship throughout the fall semester.

“Each bank specializes in something,” Lewandowski said. “Our bank, the St. Louis Fed, specializes in the creation of data, and they also do cash services.”

Lewandowski’s project this summer focused heavily on risk management, and through the help of her financial management team and her fellow interns, she was able to tier vendors on a four-level scale according to their risk.

“I'm making a lot of judgment calls and doing a lot of research,” Lewandowski said. “I’m also asking around the different contract specialists to figure out what exactly each vendor did and what services they performed for us to figure out like how they transmitted our data and what they did with our information.” 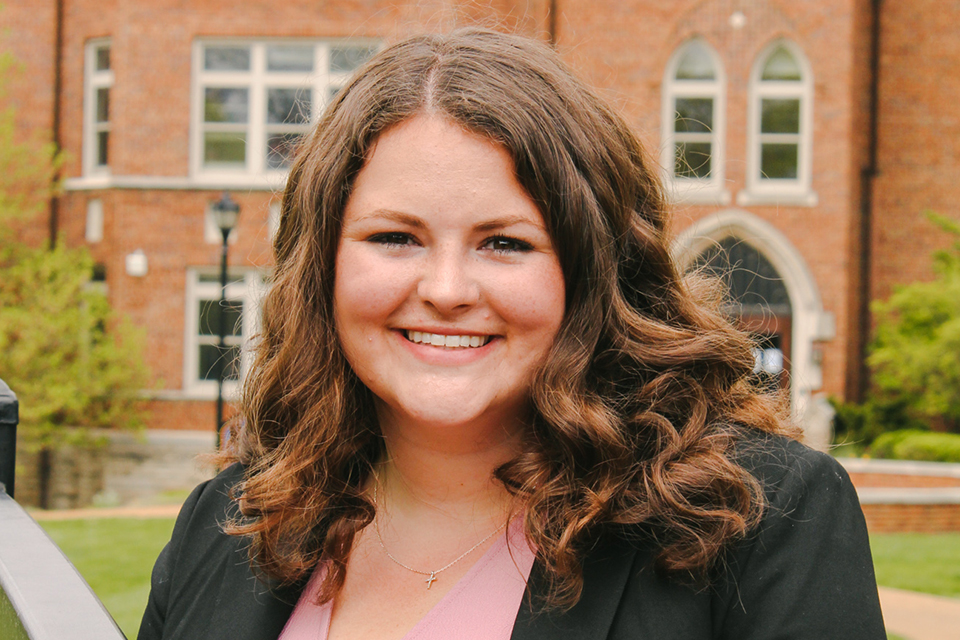 Elyse Lewandowski, a senior at the Chaifetz School majoring in Finance and minoring in international business, interned at the Federal Reserve Bank of St. Louis in the Financial Management and Procurement sector.

Lewandowski credited much of her success in this role to her foundational business courses at SLU. In addition to her internship, she is also the president of both the Dean’s student advisory board in the Chaifetz School of Business and the business fraternity, Delta Sigma Pi.

“I would have a much harder time keeping up in meetings if I didn’t have the background and the lingo,” Lewandowski said. “I also think part of working is learning on the job. You don’t necessarily use everything that you learned, but you have the overall skills that are important to give you the confidence to do the job.”

Initially hearing about the position through Handshake, Lewandowski first applied last summer and was let down when she wasn’t hired.

“I think I was just too young, honestly,” Lewandowski said.

While it didn’t work out her first time around, she was still invited to the Day at the Fed, where the St. Louis Fed walked through the ins and outs of how the bank works, giving potential interns the opportunity to network with different departments and preview what it would be like to work there.

“After that, I was working at a different internship, and I really didn’t care for the work I was doing,” Lewandowski said. “So the next year, I applied for the Fed again, and the rest is history.”

Since starting her internship at the beginning of the summer, Lewandowski has been consistently pleased with both the work she’s producing and the culture that’s supporting it.

“It was my dream internship the whole time I was in school,” Lewandowski said. “I really like the culture—it’s pretty slow to change, but I appreciate how friendly and welcoming everyone is.”

That culture is what allowed Lewandowski to fulfill her goal of meeting with four people every week from varying departments to get a feel for the different divisions and where she would fit best should her internship turn into a career.

“Everyone was super willing to meet and chat about what they do,” Lewandowski said. “It was really educational more than anything.”

ABOUT THE RICHARD A. CHAIFETZ SCHOOL OF BUSINESS

Founded in 1910, the Richard A. Chaifetz School of Business at Saint Louis University has shaped the future of industry for more than a century. As one of the oldest business schools west of the Mississippi, the Chaifetz School has built a reputation as a leader in business education with eight undergraduate and graduate programs nationally ranked by U.S. News & World Report.