The Service Leadership Program at the Chaifetz School of Business supports students with passion for social justice by encouraging them to start their own projects. Jason Wilhite, a senior service leader, brought Pencils of Promise to SLU by building upon his experiences from Firm Foundations South, Viator House for Hospitality and a mission trip to the border. 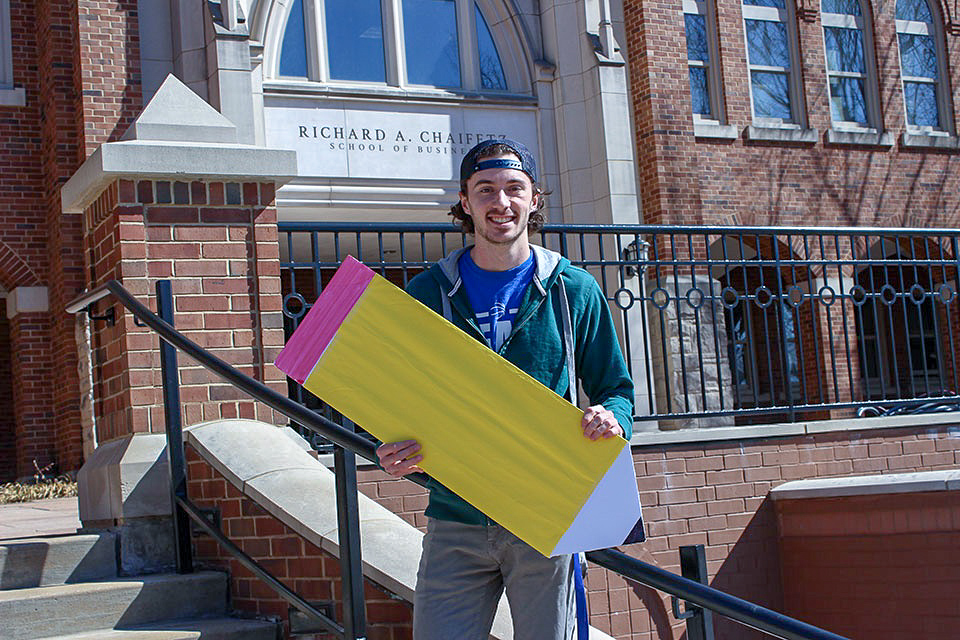 "The ability to combine my passion for service with social justice and my passion for education with my business degree experience is something I'm really grateful for,” Wilhite said.

Through the Service Leadership Program, Wilhite said he has obtained the fundamental skills to be a strong leader. Building upon these skills, Wilhite and his friend, Scott Shadrick, brought Pencils of Promise to SLU's campus in the fall of 2017.

"Now after two years, we’ve become a Chartered Student Organization (CSO), hosted educational events on campus and have raised over $13,700 (at SLU) for education programming in developing nations," Wilhite said.

Pencils of Promise is an independent, nonprofit organization that aims to build community across educational groups on campus to spread awareness about the barriers to global literacy and increase access to quality education in developing areas.

"There's a whole spectrum of different issues that impact global education, and Pencils of Promise takes a multi-faceted approach in working to drive literacy in these communities around the world," Wilhite said.

In bringing Pencils of Promise to SLU, Wilhite hopes to inspire others to start organizations and projects that speak to their individual values.

"No matter what your passions line up to, having people in the business school who are really supportive of students is an opportunity that we have to build student organizations and start projects, so just go for it," Wilhite said.

Wilhite Serves Beyond Pencils of Promise

Wilhite volunteered at a variety of service sights throughout his time at SLU including Firm Foundations South, a tutoring center for refugee children. Once a week, Wilhite tutored a child named Klo Htoo Say and would occasionally play soccer and get ice cream together.

“Building a relationship was something I looked forward to and was one of the most meaningful opportunities that I had during my four years,” Wilhite said.

At Viator House for Hospitality, an all male immigrant community ministry in Chicago, Wilhite's specific roles were being a first responder in which he was to respond to any arising emergency situation. He was also a tutor in which he taught English as a second language. Wilhite recalls feeling more like a part of a community than as an authoritative figure.

"It's important to minimize the difference between people who are affected by social issues in our community and instead focus on building relationships," Wilhite said.

Building relationships with people separated by social issues is what motivated Wilhite to co-lead a mission trip to Nogales, Mexico, a city located directly on the border. The group interacted with the locals, serving dinner to a group of people who were deported that same day.

"If there is an issue that speaks to you or that you’re involved with on campus, it could be a good opportunity to take a trip to build relationships with people who are doing intense, impactful work on resolving that issue,” Wilhite said.

Wilhite's background in meeting refugees and immigrants to understand their diverse backgrounds inspired Wilhite to advocate on social issues to policymakers.

"There’s a lot of humanity in these experiences and different perspectives in which it's important to advocate for change at the policy level or even learn about the policies that are currently being disputed," Wilhite said.

Through the Service Leadership Program, students grow into leaders who think ethically and innovatively to solve problems with the technical and critical thinking skills they acquire. As a result, students learn to embrace servant leadership and social change as professional and personal philosophies