For some college seniors, the excitement of graduation is tinged with stress over where they will work after getting their degree. That wasn't a problem for Snehitha Injamuri, though. The international business major at the Chaifetz School of Business found her job before getting her diploma. 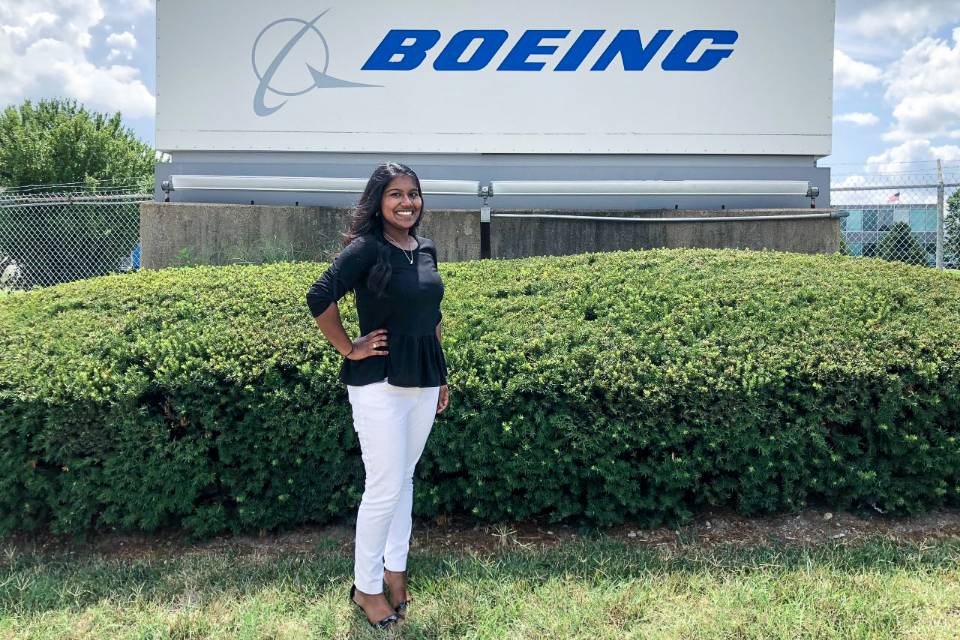 In the summer of 2018, Snehitha Injamuri worked as an estimating and pricing intern for The Boeing Company. Now, she will be working full time for Boeing's business skills rotation program.

"After graduation, I am working for Boeing full-time in one of their finance rotational programs here in St. Louis," Injamuri said.

In the summer of 2018, Injamuri worked as an estimating and pricing intern for The Boeing Company. Her specific duties included interpreting historical pricing data to assemble cost volume analyses, and performing risk, financial and competitive analyses.

During her internship with Boeing, Injamuri presented a capstone project outlining business process automation opportunities within the company, showcasing her professional leadership skills.

"My biggest takeaway from the internship was that it is okay to ask others for help," Injamuri said. "As an intern, I was very unfamiliar with the various softwares Boeing uses, and since they are proprietary, I had no external resources that I could use to answer questions other than my teammates."

Injamuri implemented key business concepts from her courses at the Chaifetz School to her internship at Boeing, becoming well-rounded in all business areas.

"SLU prepared me for my internship by helping me develop a wide skill set in terms of both personal and technical skills," Injamuri said. "Although my internship was in their finance department, I was able to draw information on various types of cost analyses from classes such as ACCT 2220 (Managerial Accounting) to complete my day-to-day tasks."

Not only was the education valuable to Injamuri's success in her internship, she said, but so were the resources offered by the Chaifetz School, specifically the Valerie A. Davisson Career Resources Center (CRC).

"Before the Chaifetz School Career Fair, I went to the CRC and had my resume reviewed, found out what companies at the fair pertained to my major, got tips on how to market myself and even had my interview organized through the CRC, so I would not have to commute to Boeing but stay in the business school," Injamuri said.

"Through my experiences at SLU, I learned how to write formal business reports, present in-depth company analyses, market myself in a professional setting and also developed skills such as problem-solving, communication and critical thinking," Injamuri said.

Did You Know? 80% of Chaifetz School undergraduate students completed at least one internship.
Learn more about the Career Resources Center at the Chaifetz School of Business