After three years working as a corrections officer for the St. Louis County Department of Justice Services, part-time law student Katie Doherty, then a 2L, realized in December 2015 that the department employees had reached a boiling point. 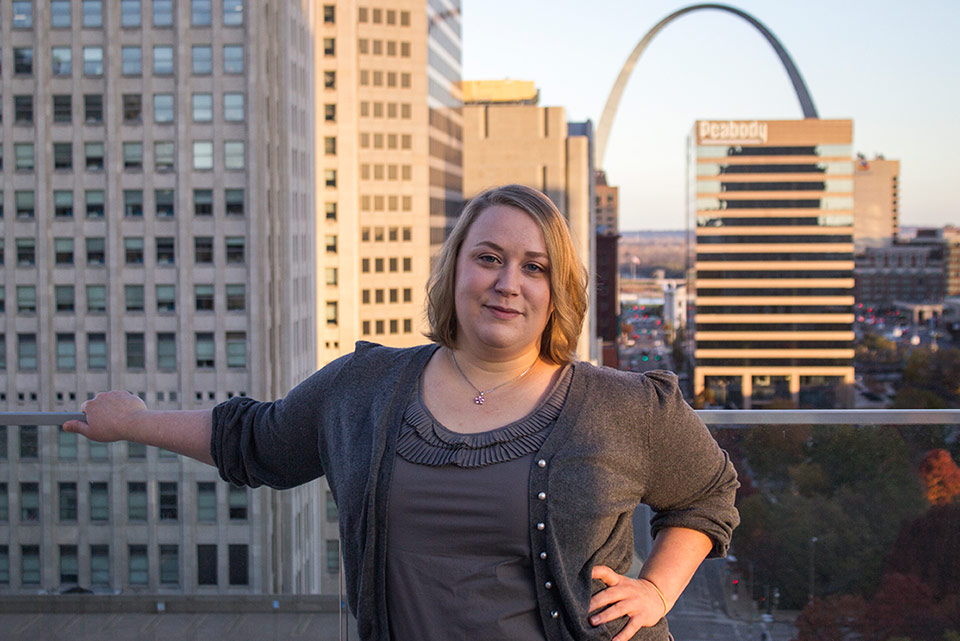 Katie Doherty is a part-time law student who works full time as a corrections officer.

Following nearly 10 years of a merit raise freeze, employee turnover and low morale was rampant in the St. Louis County Jail overseen by the department, located in the Buzz Westfall Justice Center in downtown Clayton, Mo., where Doherty works.

Compared to surrounding jurisdictions, corrections officers almost everywhere else earned more money, despite the jail being the only nationally accredited detention facility in the region, housing between 1,200 to 1,400 inmates from nearly all of St. Louis County’s 90 municipalities.

Additionally, the officers at the Justice Center work in “direct supervision confinement,” sharing common spaces with inmates face-to-face (as opposed to being separated by bars or glass), which increases the risk of physical and sexual assaults.

“Over the years you see job listings from other jurisdictions,” Doherty said. “When everyone else is making more money than you and you’re losing people to those other departments, you’re like, okay, we’re understaffed, underpaid, something’s gotta give.”

Doherty took up the cause, along with five other officers who served as the “vocal minority” for the next year and a half.

“We started going to the St. Louis County Council meetings and would have officers speak, basically saying that it’s just more cost-effective to retain people than to constantly be a rotating door,” she said. “Once Prop P was on the ballot, we started campaigning, handing out pamphlets, getting involved with the public and letting them know this is what’s going on.

“We amped up our efforts and got involved with our union, and finally they allowed us to go into negotiations for wages, and we got a really, really good increase,” she said. “It was one of the biggest in the union’s history.”

St. Louis County Executive Steve Stenger officially signed the legislation on Nov. 13, and Doherty says her phone has been blowing up with messages of gratitude and support. About 250 officers are affected by the change.

I was definitely at an advantage being a [law] student because I knew I wasn’t going to get pushed around, I knew what my rights were. I don’t think we would’ve gotten the same if I hadn’t known my rights."

The jail where Doherty works is currently 30 percent understaffed, which she says is dangerous because the officers are constantly stuck on overtime. Doherty, who works the overnight shift at the jail after taking evening classes, says if no one comes to relieve her at 6:30 a.m., she can’t leave. If pay goes up, morale goes up, and experienced officers who know how to safely deal with mentally ill or violent inmates will be more inclined to stick around, which she says is crucial to prevent abuse and protect inmates.

“Someone like me or someone who’s been doing it even longer knows that when [an inmate] gets back from court after they’ve been sentenced to 25 years, they might be wanting to hurt themselves, they might want to hurt someone else – you recognize these things. When you’re brand new, you don’t. So if you can keep people who have been doing this for years and can recognize suicidal tendencies and can talk to someone – and some of these people are in and out all the time, you know them, you develop a bond – you can talk them out of hurting themselves or someone else, you really can make a difference. So it really is important to keep people on that have been doing it for a long time.”

Doherty, a mother of a 12-year-old son, said there were times when she feared for her job during the process. The experience made her want to go into employment law, though she does not know if that is what she will end up doing after law school.

“There was some pretty big opposition to how visible and how vocal we were and how we were getting attention from the public and the Post-Dispatch,” she said. “I was definitely at an advantage being a [law] student and even going into the negotiations, not getting trampled over, because I knew what I came in there to do, I knew I wasn’t going to get pushed around, I knew what my rights were. I don’t think we would’ve gotten the same if I hadn’t known my rights.”

Though she had not taken their classes, Doherty had reached out to employment law professors Marcia McCormick, J.D., now associate dean for academic affairs, and Miriam Cherry, J.D., co-director of the Wefel Center for Employment Law, for advice during the process.

“I just picked the brain of a lot of people, and they were so helpful,” she said. “All my classes were really helpful, too, because when you know your rights and you know when something is wrong, it makes you so much more confident to change it.”

Doherty plans to graduate this December and sit for the Missouri bar exam in February 2018.