Former U.S. Ambassador to Ireland, longtime litigator and double alum will serve as a Professor of Practice and Ambassador in Residence for the School of Law. 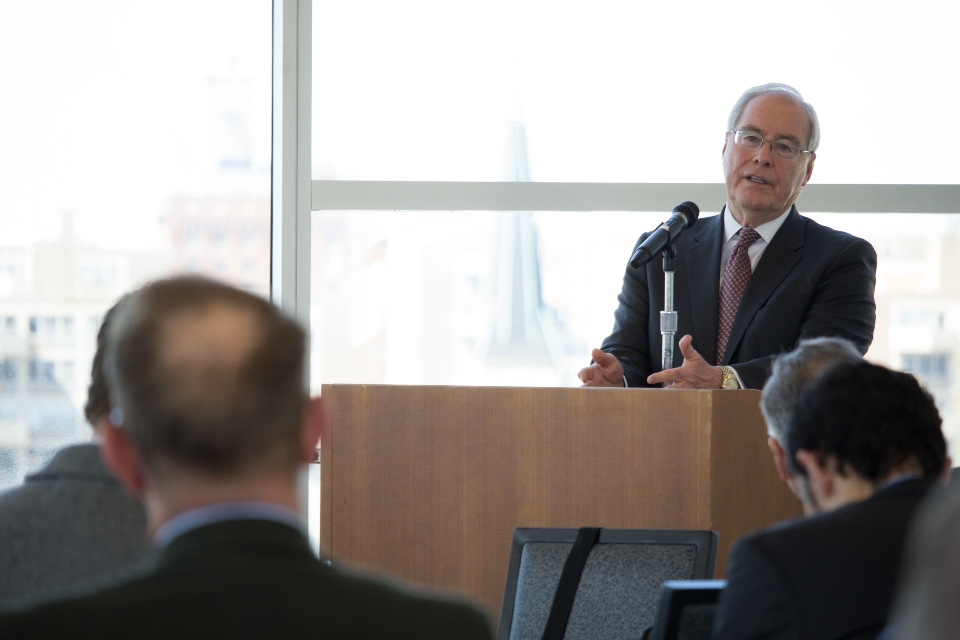 Saint Louis University School of Law is pleased to announce the appointment of former Ambassador Kevin F. O’Malley (A&S '70, Law '73) as the Ambassador in Residence and Professor of Practice affiliated with the Center for International and Comparative Law. Currently of counsel at Greensfelder, Ambassador O’Malley, an alumnus of SLU LAW, served as the United States Ambassador to Ireland from 2014 – 2017 under the Obama Administration.

“The incredible combination of practical experience as a longtime litigator and diplomatic experience as our representative in Ireland will make Ambassador O’Malley an excellent resource for our students,” said William Johnson, dean and professor of SLU LAW. “He has already been so generous with his time and we look forward to the insight and thoughtfulness he will provide our community.”

In his role, Ambassador O’Malley will counsel students and serve as a resource for the Center for International and Comparative Law.

“I look forward to this opportunity to share my insights and experiences with my alma mater,” said Ambassador O’Malley. “The School of Law continues to produce excellent attorneys.  I feel fortunate to be included among the faculty who help educate them on the practical aspects of the practice of law.”

Ambassador O’Malley began his distinguished career in the Organized Crime Section of the U.S. Department of Justice and prosecuted Mafia cases in Washington, D.C., California, Arizona and Nevada. He later returned to his hometown of St. Louis as an Assistant U.S. Attorney and prosecuted white collar criminal cases. During this time of government service, he taught trial advocacy and white collar criminal law at SLU LAW and Washington University in St. Louis School of Law.

When entering the private practice of law, O’Malley specialized in the defense of physicians and hospitals in trials in which medical negligence was alleged.

He is a fellow of the American College of Trial Lawyers (ACTL), and a nationally recognized author of a treatise on jury instructions that is used in federal jury trials throughout the United States.

President Barack Obama called O'Malley back into government service when he nominated him to serve as the 31st United States Ambassador to Ireland. After taking up residence in Deerfield in Phoenix Park, Ambassador O’Malley set a course continually emphasizing two key goals: to broaden and strengthen the commercial ties between Ireland and the United States and to develop new and innovative ways to connect young Irish and American entrepreneurs and artists. Ambassador O’Malley’s “Creative Minds” series has been cited as the beginning of a new era in this regard and led the Irish government to establish its own “Creative Ireland” program to continue and supplement Ambassador O’Malley's efforts.