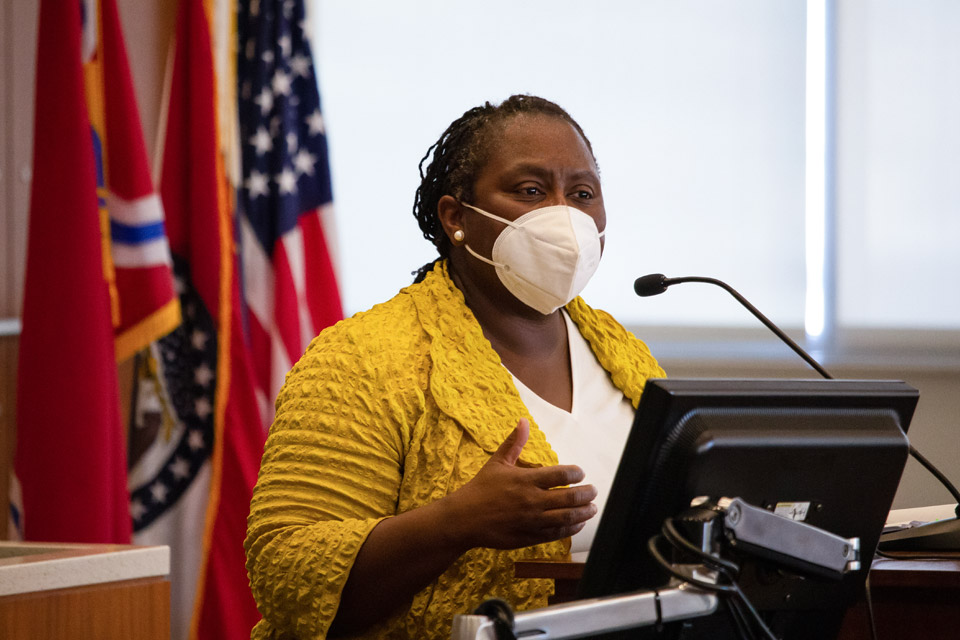 In her address, Dean Onwuachi-Willig discussed the importance of critical-race theory in the law.

“The decision to make critical race theory this year’s topic for the symposium is not one that we should overlook,” said Onwuachi-Willig. “In a context in which a full-scale attack has been launched against critical race theory to undermine and discredit the field as divisive and as my co-editors and I point out in the forthcoming book, Critical Race Judgments, as being beyond all reason.”

She attributed the successes of recent protests and movements like “#MeToo” and “#BlackLivesMatter” to two factors: the emergence of critical-race theory; and the emergence of social media and its impact on the resource mobilization component on social movement making.

“Not only have we have given them a language and an expectation for what they should expect and demand to achieve equality, but also the theoretical framework for establishing and building the movements and solutions to achieve that vision.”

She discussed the meaningful role of critical-race theory in the Black Lives Matter movement and shaping ideas behind the movement, classical sociological models and social movement theory, the informal and formal means in which people form social movements, and the emergence of social media helping to create new avenues of communication, outreach, and movement making to those who have not previously had access to power and traditional media outlets.

Dean Onwuachi-Willig covered the development of the Black Lives Matter movement from inception, and the means of using Twitter as a means to rewrite stock narratives with counternarratives.

Speaking of the Twitter campaign, “#IfTheyGunnedMeDown” she said, “This campaign offered a sharp and persuasive critique on how Black victims get demonized in the media through chosen representations of their character. In this critique, Black tweeters posted two contrasting pictures of themselves, suggesting that the more sympathetic photograph, often from a graduation, military service ceremony, or church would be the photograph the media would choose to ignore, instead choosing to publish a more stereotypical or negative image that provided only one limited snapshot of their lives.”

View the 2021 Childress Lecture in its entirety

Learn more about the Childress Lecture