The Richard J. Childress Memorial Lecture, named in honor of former Dean Richard J. Childress (1969-1976), is a premier academic event highlighting a provocative and timely area of law. The lecture commemorates the contributions Dean Childress made academically, ethically, and socially to benefit the Saint Louis University School of Law.

Dean Childress was a member of the faculty at the School of Law for almost 30 years, and then served for 15 years as associate dean and dean. Among other achievements, Dean Childress is credited with founding the Saint Louis University Law Journal.

Every year, the Journal sponsors the Lecture and publishes the keynote address on a timely legal topic as well as responses from the lecture’s scholarly participants.

Established by the generosity of alumni and friends of the former dean, the lecture aims to enhance the exemplary teaching at the School of Law by bringing world-renowned scholars to campus for academic enrichment. 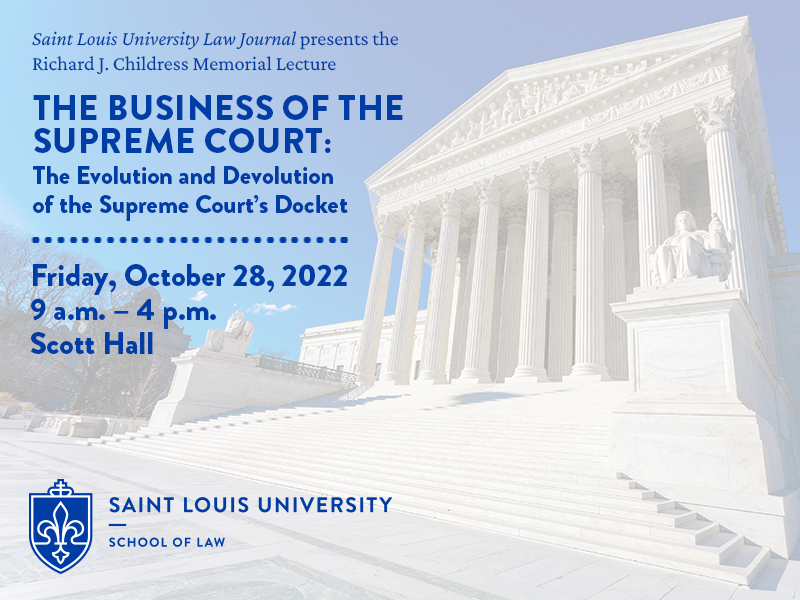 This year’s annual Childress Lecture, to be delivered by University of Texas School of Law Professor Stephen Vladeck, will provide both a historical introduction to and a modern reassessment of the shape and size of the Supreme Court’s docket — and will argue that both academic and public discourse about the work of the Court has increasingly failed to account for holistic shifts in the kinds of cases that the Justices are (and aren’t) choosing to decide. A proper accounting of the ‘Business of the Supreme Court,’ Professor Vladeck will argue, helps to show just how significantly the Court’s role in our legal system has changed in recent years — without almost anyone noticing.

Panel 1: Intricacies of the Court

Interrelationships of the Court

2021: Critical Race Theory and the Law

On October 8th, 2021, the Childress Lecture, in cooperation with the Saint Louis University Department of African American Studies, examined critical race theory to critically examine American law as it intersects with issues of race and other social constructs in the United States.

The use of technology always involves tradeoffs: we sacrifice some of our privacy or liberty to gain convenience or security. Some people are happy to make these tradeoffs; some balk at them; and others yield to them as inevitable. But whatever our attitude, we should be aware of those tradeoffs as well as the law’s ability — or inability — to mitigate the most dangerous aspects of technology. This year’s Childress Symposium focused on several modern dilemmas at the intersection of technology, privacy, and the law.

Panels included “The Fourth Amendment, Privacy, and Technology,” “The Promise and Perils of Using Technology in Fighting Against COVID-19,” and “Lawyering in an Interconnected World.”

Orin Kerr, professor of law at the University of California, Berkeley School of Law, gave the keynote lecture, "Email Preservation and the Fourth Amendment."

On October 11, 2019 the Childress Lecture explored the rapid technological change and the rise of social media that have upended the traditional media’s business model and radically changed how people communicate, educate, and persuade. The decline of the traditional media as information intermediaries has transformed and coarsened social and political communication, making it easier for misinformation and vitriol to spread. The result? Political campaigns that increasingly take place under conditions of voter mistrust and groupthink, with the potential for foreign interference and domestic political manipulation via new and increasingly sophisticated technological tools. Such dramatic changes raise deep questions about the conditions of electoral legitimacy and threaten to shake the foundation of democratic governance.

This conference considered how this challenging information environment will affect election law in areas such as campaigns, campaign finance, and voting rights, and what election law might be able to do about it.

The keynote speaker was Richard L. Hasen, Chancellor’s Professor of Law and Political Science at the University of California, Irvine.

Tracey L. Meares was the keynote speaker. Meares is the Walter Hale Hamilton Professor of Law and founding member of the Justice Collaboratory at Yale Law School. Her address was titled "Synthesizing Narratives of Policing."

On October 13, 2017, the Childress Memorial Lecture examined the role, rhetoric and practices of the United States’ criminal justice system using international human rights norms as perspective. Panelists discussed how the modern criminal justice system in the U.S. – whether it is pretrial detention, treatment of gender violence or juvenile populations, or the continued use of the death penalty – conforms to or violate international human rights standards, and what can be done to change that.

The keynote speaker was Samuel R. Gross, Thomas and Mabel Long Professor of Law at The University of Michigan Law School, whose address was titled "The Death Penalty, Public Opinion, and Politics in the United States."

2016: Indigence and the Criminal Justice System

On October 6-7, 2016, the Childress Memorial Lecture addressed the continuing inequality in the criminal courts. While Americans are increasingly aware of issues involving law enforcement agencies and communities of color, less attention has been paid to the courts to which those arrested are sent after being taken into custody.

In that system, numerous discretionary decisions are made by prosecutors, such as whether to file charges; whether a high bail be set so the accused remains in jail; what charges to bring; whether to seek enhanced penalties such as the death penalty, life imprisonment without the possibility of parole or a mandatory minimum of years in prison; whether to make a plea offer and what offer to make; what information to disclose to the defense; and whether to strike prospective jurors based on race during jury selection.

Most of the discretionary decisions are made by white men, even though virtually all the people appearing before some criminal courts are people of color. People are often prosecuted in municipal courts whose primary purpose is revenue generation and not law enforcement. In those courts and others, the accused may be denied a lawyer to assist them, or may be given a lawyer who lacks the competence, resources, experience, training and, in some cases, the inclination to provide a zealous and effective defense. In many states, the people in charge of this system – governors, legislators, prosecutors and judges – want it to remain as it is because it gives the prosecution an enormous advantage in obtaining convictions, fines, jail and prison terms, and death sentences.

The keynote speaker was Stephen B. Bright, president and senior counsel of the Southern Center for Human Rights and Harvey Karp Visiting Lecturer in Law at Yale Law School, whose lecture was titled "The Future of Criminal Justice Reform."

The Future of Criminal Justice Reform

On November 13, 2015, scholars from across the country addressed conflicts following recent legal developments in areas such as same-sex marriage, birth control coverage and mandatory vaccinations, examining the clashing of rights and how they could potentially be resolved.

Lawrence Sager of the University of Texas School of Law was the keynote speaker, whose lecture was titled "The Imminent Clash Between Religious Freedom and Public Accommodation Law."

On October 25, 2014, the Childress Memorial Lecture addressed the "long and not-so-merry war" between proponents of federalism and nationalists.

Keynote speaker Professor Heather Gerken argued that now is the time for a détente between the warring sides. Those on both sides of the debate have an outdated idea of what “Our Federalism” looks like today. As a result, many of the debates in the field are beside the point, and it would be better for scholars to direct their considerable energies at different questions than the ones they have traditionally pursued. Gerken questioned whether it’s possible to have a “nationalist school of federalism” and described what each side needs to give up in order for a détente to succeed.

Coverage of the 2022 childress lecture in the New York times 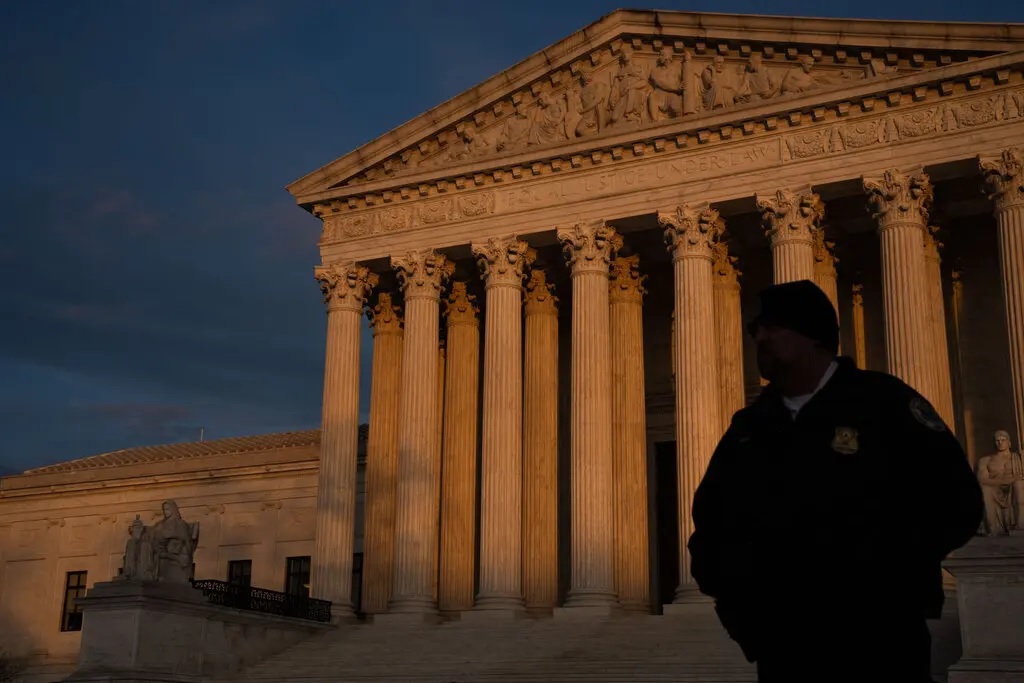