SLU-Madrid's political science program fosters a theoretical and empirical understanding of key international dynamics, major crises and opportunities for change. It aims at giving students strong analytical skills and functional competencies specific to political science and international relations. Our goal is to strengthen our students' awareness of global events and to become actors for positive change. 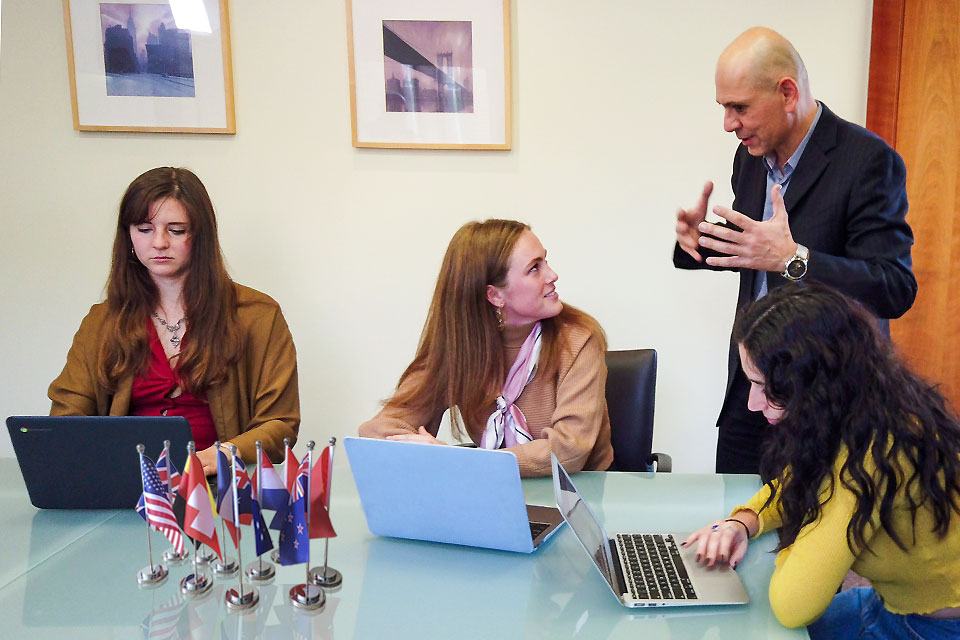 Saint Louis University offers a Bachelor of Arts in Political Science with a concentration in international relations. It can be completed in Spain. You also have the option to begin your studies in other political science disciplines ― American politics, comparative politics or political thought, for example ― and complete your degree in St. Louis, Missouri.

Our program places special emphasis on the study of international, multilateral and regional political and economic institutions, while examining public and private state and non-state actors' roles and interactions. As a political science student at SLU-Madrid, you'll be exposed to a broad spectrum of issues in the increasingly complex and interrelated world, as well as national and international security challenges, such as threats posed by nuclear weapons, terrorism, poverty, climate change and environmental issues, pandemics and health-related challenges.

For information about the assessment of student learning in this program, please see the University-wide website.

The major requirements include:

There are two options for the political science minor: the general track or the specialized international relations track. Both tracks require 18 credit hours of coursework.

To combine theoretical and practical learning, qualified political science students may choose to earn up to three credit hours toward their degree by doing an internship. These students learn to implement the skills they study while gaining valuable professional experience at institutions such as governmental organizations, embassies, think tanks, companies and non-profits.

SLU-Madrid is committed to providing a quality Jesuit education at an affordable price. Tuition rates at the Madrid Campus are approximately 40% lower than at comparable private universities in the U.S.

If you have questions or would like to speak with a financial aid officer, email us at financialaid-madrid@slu.edu.

Admission to the Major

To be admitted to the major, you must have at least a 2.00 cumulative average and complete a declaration of major form, available in the Office of the Registrar. Upon acceptance to the program, you will be assigned a departmental advisor.

To be certified for graduation, you are required to:

Saint Louis University's accelerated B.A.-to-M.A in political science program lets you earn both a bachelor's and a master's degree in approximately five years. If you are majoring in political science at the Madrid campus and possess a GPA of at least 3.4, you may apply for admission to the program during your junior or senior year. For more information, please contact us.