Saint Louis University's Department of Pediatrics' Pediatric Research Colloquium meets every second and fourth Tuesday from 12:15 to 1 p.m. in the Husmann Room. Learn what fellow faculty members are doing in academics and present research projects (finished, just starting, or even well thought out ideas/hypotheses) in an informal collegial way. 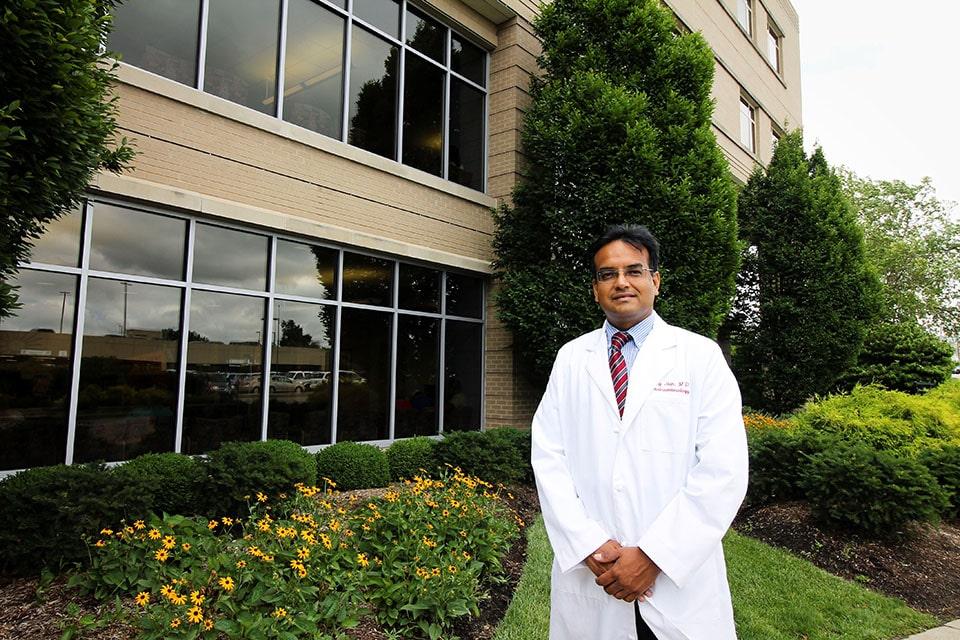 Contact Lisa McNeil at mcneillm@slu.edu for further information or if you are interested in presenting at the Pediatric Research Colloquium.

Ayoob Ali M.D., MPD, MBA, CPE
Ali is currently working on a neonatal laryngeal mask airway (NLMA) device to be used in premature and term infants for neonatal resuscitation or establishing difficult airway in neonates. The device can also be used as a non-invasive way to administer surfactant without endotracheal intubation. Currently, there is no other device available to administer surfactant into premature neonates without endotracheal intubation.
Stephen R. Braddock, M.D.

Braddock's research interests and goals are to investigate the prevalence of, consequences (including dysmorphology and longitudinal variation) of prenatal teratogen exposures and birth defects.

Broom's current research is focused on:

Jeremy S. Garrett, M.D.
Garrett's research interests include simulation as a tool for both medical learning and building a highly efficient medical team. He is also interested in the use of innovative game format for medical learning. Previous basic science research interests in production and release of cellular growth factors in the pathogenesis of and recovery from critical illness.
James M. Gerard, M.D.
Gerard's research interests include studying the use of simulation to train physicians in cognitive and psychomotor pediatric emergency medicine skills. He is beginning an ONR-funded project to develop and validate a virtual pediatric simulator to train physicians on high-stakes pediatric emergency medicine scenarios.
Meg Hefner, M.S.

We have developed CHARGE Syndrome Clinical Database Project (CSCDP), an extensive clinical database within Qualtrics (a SLU-contracted survey tool). Parents or adults with CHARGE syndrome can enter data in the 12 sections of clinical information via a web-based survey tool. We intend to collect as much information as possible on a very large cohort for local "data mining" and as an adjunct to others researching CHARGE syndrome. Provisions are in place to share data with other researchers.

Hillman is interested in ventilator-induced lung injury and the progression of inflammation and injury toward bronchopulmonary dysplasia (BPD) in preterm infants. The focus of his current work is to evaluate the biochemical processes and signaling pathway activated by the initiation of ventilation at birth and developing ways to decrease this injury. He use preterm lamb models to evaluate modes of ventilation and lung injury.

King's hospital pediatrics areas of focus are GJ outcomes in neurologically impaired children, and inpatient identification and management of obesity. She is currently working on developing scholarly activities in the area of medical education with a focus on clinical reasoning.

Dr. King's current research is focused on cardiac imaging, including CT and MRI.

Neonatal inflammation and immunity: Premature neonates are particularly prone to hyper-inflammatory responses that can lead to chronic inflammatory disorders in critical organs, including the brain, eyes, lungs and intestines. Our goal is to understand how neutrophils, alone and in their interactions with other immune cells, direct inflammatory responses in neonates. To achieve this, our studies are focused on in vitro and in vivo studies of human preterm and term neonates and neonatal mice. Neonatal neutrophil function & production: Neonates have increased susceptibility to the development of neutropenia, defined as subnormal numbers of circulating neutrophils. Studies to better understand the mechanisms that regulate neutrophil production and survival in neonates are primarily focused on two conditions commonly associated with neutropenia: preeclampsia (a pregnancy disorder associated with neonatal neutropenia) and neonatal sepsis.

Ladage's goal is to develop a clinic to provide comprehensive medical services for refugee children entering St. Louis which will include initial screening as well as long term primary care. The clinic will also provide a longitudinal academic experience for SLU medical students pursuing distinction in global health care or service. In addition, she has an interest in the impact of early trauma on social/emotional development and attachment in children adopted internationally.

Lowrie is interested in researching PICU outcomes, as well as pediatric sedation outcomes, processes and quality.

Myers' research has mainly been growth hormone studies in subjects of all ages with Prader-Willi syndrome. She has also done some diabetes research, and is currently a study evaluating the transition process for adolescents.

Noyes is currently involved in clinical trials in cystic fibrosis, newborn screening for CF, and vocal cord dysfunction in adolescents and college athletes.

Robert S. Ream's current research focuses on describing contemporary practice in pediatric organ donor management across the 58 US organ procurement organizations. This intense period of clinical management typically extends from the declaration of brain death to the recovery of organs in the operating room. The ultimate goal is to determine which aspects of donor management are associated with a greater number of organs donated per donor and improved post transplant organ function. Important liaisons include Mid-America Transplant Services (MTS), the Organ Donation Research Consortium (ODRC) and the Association of Organ Procurement Organizations (AOPO).

Sadiq's research interests include melatonin use in hypoxic ischemic encephalopathy.

Sobush primarily studies distal airway epithelial cell dynamics in both the developing and adult lung during periods of both steady state and injury in mouse models. Specifically, his work focuses on Club (or Clara) cells as the localized progenitor cell population.

Jeffrey Teckman, M.D.
Teckman's research interests involve investigation of the mechanisms of liver injury, especially as related to intracellular proteolysis, with the genetic disease, alpha-1-antitrypsin deficiency as the primary model. He is also involved in a wide range of clinical and translational research projects involving metabolic liver diseases, hepatitis B infection, fatty liver disease, hyperphagia, and cystic fibrosis.
Sherida E. Tollefsen, M.D.
Tollefsen is SLU's PI for the NIH-funded, multicenter "Treatment Options for type 2 Diabetes in Adolescents and Youth" (TODAY) Study. In response to the growing epidemic of type 2 diabetes in childhood, the research protocol was designed to evaluate the efficacy of three treatment regimens on time to treatment failure based on glycemic control.
Jason Alexander Werner, M.D.
Werner's ongoing investigations relate to resident and fellow education, particularly as it relates to issues of patient safety and quality. This includes the utility of high-fidelity patient simulators, teamwork and role identification, and active fostering of a robust safety culture.
©