Artists Daniel Ramirez and Buzz Spector were studio mates in the MFA program at the University of Chicago in the 1970s, forging a friendship that has lasted ever since.

In this wide-ranging conversation with MOCRA Director Terrence Dempsey, S.J., they trace the evolution of their artistic output over the decades. They touch on the thought of Ludwig Wittgenstein, the music of Olivier Messiaen, divine geometries, book design, and even the finer points of bowing technique.

Scroll down for a Listening Guide to the conversation.

Daniel Ramirez: Twenty Contemplations on the Infant Jesus – An Homage to Olivier Messiaen 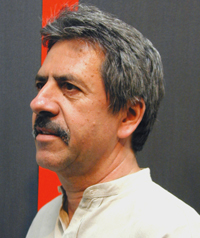 Active as an artist for over 45 years, Daniel Ramirez is Professor Emeritus of Art at the University of Wisconsin. Now residing in Chicago, Ramirez is regarded as an outstanding minimalist artist equally adept at painting, drawing, and print-making. He has been exhibited across the United States and Europe, and his works are included in many public and private collections, including the Indianapolis Museum of Art, the Museum of Contemporary Art, Chicago, and the Art Institute of Chicago.

Ramirez brings to bear the music of French composer Olivier Messiaen, the lines of Gothic architecture, and the philosophy of Ludwig Wittgenstein on his serenely intellectual paintings and prints. In 2004, MOCRA presented a series of intimate etchings by Ramirez titled Twenty Contemplations on the Infant Jesus: An Homage to Olivier Messiaen. In 2017, Ramirez was the subject of a major retrospective at the Chazen Museum of Art titled Certainty and Doubt: Paintings by Dan Ramirez, 1975–2017.

Buzz Spector is an artist, writer, and Professor of Art in the College of Art of the Sam Fox School of Design and Visual Arts at Washington University in St. Louis. His art practice makes frequent use of the book, both as subject and object, and is concerned with relationships between public history, individual memory, and perception. He has had numerous exhibits in private and institutional galleries and museums in the U.S., Europe, and Asia, and his solo or two-person museum exhibits include the Art Institute of Chicago; Corcoran Gallery of Art, Washington, DC; Mattress Factory, Pittsburgh, PA; Orange County Museum of Art, Newport Beach, CA; and the Cranbrook Art Museum, Bloomfield Hills, MI.

He is represented in St. Louis by the Bruno David Gallery and in Chicago by Zolla-Lieberman Gallery, which also represents Dan Ramirez. In 2013 Spector received the Distinguished Teaching of Art Award from the College Art Association. Among his other recognitions are a Louis Comfort Tiffany Foundation Fellowship in 1991, and National Endowment for the Arts Individual Artist Fellowships in 1982, 1985, and 1991. Photo by Kristi Foster.