Empathy is a term that surfaces in a variety of fields, including museums. MOCRA Assistant Director David Brinker set out to explore two different angles on museums and empathy.

In Part 1, he talks with museum educator Adam Nilsen about how empathy is understood and studied, as well as the ways it is being applied in museum settings.

Part 2 features chaplain and pastoral care educator Cristina Stevens reflecting on the role art and empathy play in the training and practice of those who support the spiritual needs of healthcare patients.

Be sure to listen to the Audio Extra, in which Stevens shares reflections from three of her students about their experiences visiting MOCRA. 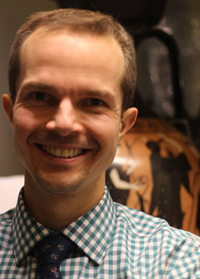 Adam Nilsen is the Head of Education and Interpretation at the Phoebe A. Hearst Museum of Anthropology. He received his Ph.D. from Stanford's Graduate School of Education in 2015 in Learning Sciences and Technology Design. He holds a B.A. from Stanford and an M.A. from New York University in Anthropology. His professional background is in museum education. As a researcher at the Oakland Museum of California, he curated exhibits with themes including migrant labor history, LGBTQ history, and Californians' recollections of the 1960s and 1970s. His research has focused on how people connect to stories of others through empathy and perspective taking. His other interests include long walks and vegan culinary experimentation. 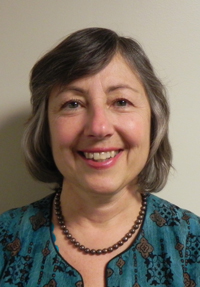 Maria Cristina Stevens is a certified Clinical Pastoral Education (CPE) supervisor with the Association for Clinical Pastoral Education, and a certified chaplain with the National Association of Catholic Chaplains. She holds a Masters in Molecular Biology from the University of Maine and a Master of Divinity from the Boston College School of Theology and Ministry (formerly Weston Jesuit School of Theology), After spending time as an instructor in nursing school programs and later as a chaplain, she became certified as a CPE supervisor in 2006 and assumed the role of Director of CPE at Baptist Hospital in Pensacola, FL. She came to Saint Louis in 2008, as Director of CPE for Saint Louis University, then in 2012 became Director of Pastoral Care and Education.

She currently serves as Director of Pastoral Care and Education for SSM Health Saint Louis University Hospital. In this role she oversees many types of educational programs in addition to CPE, such as shadowing for medical and nursing students, field education for Aquinas Institute of Theology and Eden Seminary, and a year-long Practicum for the Archdiocese of Saint Louis permanent diaconate formation program. She serves as Chair of the Ethics Commission for the National Association of Catholic Chaplains and is a member of the Professional Ethics Commission and the national Certification Commission for the Association for Clinical Pastoral Education.