Jesuit priest Leo O’Donovan, S.J., has held some prominent roles, including over 20 years as the president of Georgetown University. But he has also kept up a lively engagement with the world of art and art exhibitions, a fact well known to readers of the periodicals America and Commonweal. O’Donovan spoke with MOCRA Director (and fellow Jesuit priest) Terrence Dempsey, S.J., about his wide-ranging career and his perspective on contemporary religious art. 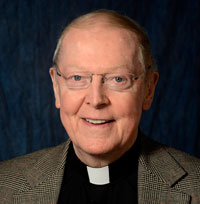 Born in New York City, Leo O’Donovan, S.J., is a graduate of Corpus Christi Grammar School there and of Iona School in New Rochelle, New York. After graduating from Georgetown University, he entered the Society of Jesus, earned advanced degrees in philosophy and theology from Fordham University and Woodstock College and was ordained to the priesthood in 1966. Under the direction of Karl Rahner, he earned his doctoral degree at the University of Münster in 1971 and subsequently taught at Woodstock College, Union Theological Seminary, and Weston Jesuit School of Theology. From 1981to 1982 he served as president of the CTSA and in 1989 was elected the 47th president of Georgetown University and served in that capacity until 2001.

A systematic theologian who has also written art criticism, he is Professor of Theology at Georgetown and currently resides at America House in New York City, where he writes, lectures, and has been a Visiting Professor at Fordham University and at General Theological Seminary, the BMW Distinguished Visitor at The American Academy in Berlin, and a Lecturer in Systematic Theology at Union Theological Seminary. Since January 2016 he has been Director of Mission at Jesuit Refugee Service/USA.