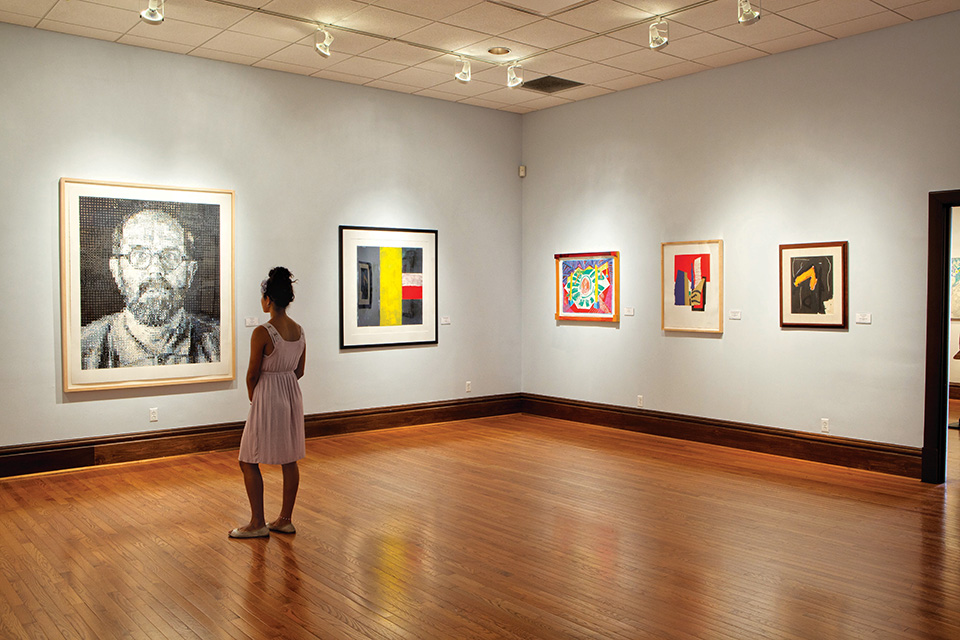 The first floor of the Saint Louis University Museum of Art is a 6,500 square foot gallery space used for temporary exhibitions.

The second floor of the Saint Louis University Museum of Art features fine art drawn from Saint Louis University's permanent collection. The floor is divided into a series of galleries permitting a variety of artists and styles to be shown. Artists represented include Serge Poliakoff, Richard Serra, Ernest Trova and Arnoldo Pomodoro.

The collection is especially indebted to the generosity of Charles H. Yalem, Judith, and Adam Aronson, and to Samuel and Audrey Levin. A recent benefaction by the Honorable Thomas Eagleton illustrates contemporary mixed media work by Robert Motherwell, Andy Warhol, Sean Scully, Jasper Johns, and Chuck Close. These artists are complemented by similar works in the permanent collection.

Collection of the Western Jesuit Missions

At the invitation of Bishop Louis DuBourg, nineteenth-century Jesuits arrived in St. Louis in 1823 hoping to work among the Indian people in the St. Louis area. They soon discovered that effective ministry would require the sending of men into the American west while the bishop discovered that the Jesuits could administer a college he had founded in 1818. Saint Louis University was taken over by the Society of Jesus in 1829 and missionaries like Father Peter De Smet, S.J., who were sent from St. Louis, following the paths already blazed by St. Louis fur traders and frontiersmen.

The original Indian mission of St. Regis established in Florissant, Missouri, was made over into a Jesuit community dedicated to the training of young Jesuits. For more than 150 years, St. Stanislaus was an academic community and a community of prayer. It was also the "motherhouse" for the Missouri province, a sprawling complex of buildings, farms and orchards. Over time, it became a repository for art, missionary artifacts, books and necessities. When the complex was finally shuttered in 1971, the original stone building on the property was dedicated as a museum. In 2001, the collection housed in the "rock building" was transferred to the Saint Louis University Museum of Art as a permanent loan of the Missouri Province of The Society of Jesus.

Today, the Collection of the Western Jesuit Missions fills the entire third floor of the museum. The artifacts illustrate not just Jesuit and Catholic life but also the frontier experience of the Jesuit missionaries. Art and artifacts reflect a universe of experience, and illustrate art over the centuries and the artifacts of continents and creeds.

The fourth-floor galleries of the Saint Louis University Museum of Art honor the passionate interest in the cultural legacy of Asia sustained by John and Ann MacLennan for more than sixty years. Hundreds of jade and ivory artifacts illustrate the artistic traditions, particularly of Japan and China.

Jade dragon boats and impressive shrines of ivory are shown along with the most extensive collection of Japanese netsuke found in the Middle West. The MacLennan's collection is supplemented by artifacts received from other university benefactors. Mrs. Paul Fletcher's gift of Japanese woodblock prints includes famous images of Mount Fuji by Katsushika Hokusai. On display as well are 14th-century Thai Sawankhalok ware figures given by Morton D. May. These figures illustrate an early type of ceramic glazing in the celadon color made most famous in the ceramic art of Korea.

Elements of Treasured Jade have been placed on extended loan. This impressive collection also features ancient bronze and beautiful ceramics altogether reflecting a continuous historic and artistic tradition of more than 3,500 years.

SLU's commitment to preserving and displaying world-caliber artworks is part of a long Jesuit tradition of the contributing to the world through culture."