Lynch’s primary interests are in the rhetoric of religion, rhetorical theory, and writing pedagogy. He has written on a variety of topics and figures, ranging from Pope Francis to Christopher Hitchens. He is currently working on a book-length study of rhetoric, religion, and the sacred.

From 2019-2021, Lynch directed SLU’s Prison Education Program. Prior to that, he coordinated the writing program from 2015-2019. He currently serves as the College of Arts and Sciences at-large representative on the University Undergraduate Core Committee.

"Almost Empty Places: Jesuit Mission and Identity as Rhetorical Topoi.” Power and Protest at an American University: No Confidence, No Fear. Edited by Ellen Carnaghan and Kathryn Kuhn. Routledge, 2020. 108-25.

After Pedagogy: The Experience of Teaching. Studies of Writing and Rhetoric Series. Urbana, IL: National Council of Teachers of English, 2013.

“The Rhetoric of Apostasy: Christopher Hitchens at War with the Left.” Concord and Controversy: Proceedings of the 2010 Rhetoric Society of America Conference. Eds. Antonio de Velasco and Melody Lehn. Mahwah, NJ: Lawrence Earlbaum, 2011. 235-45.

2018 Article of the Year Award from the Religious Communication Association for “On Care for Our Common Discourse: Pope Francis’s Nonmodern Epideictic.” Rhetoric Society Quarterly 47.5 (2017): 463-482. 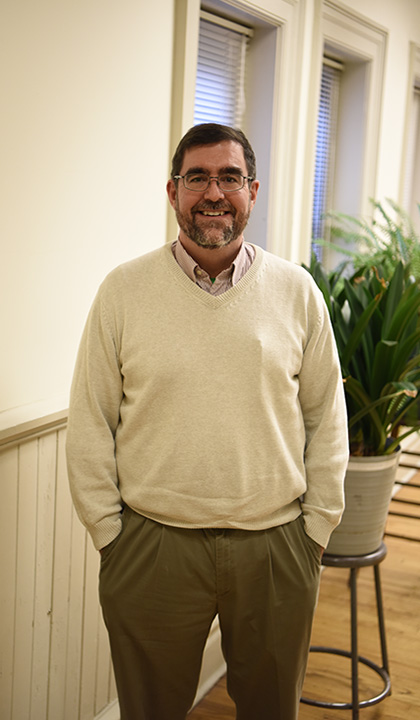