"A Loss for Words: Sounding the Depth of What We Profess in College English." Invited paper for the Creighton University Symposium "The Catholic Intellectual Tradition," March 2009. Paper published in the symposium collection in the Journal of Religion and Society, Supplement Series, Supplement 6 (Spring, 2011).

"The Exact Location of the Voice: Walter Ong and the Embodiment of Discourse." Proceedings of the 10th Annual Media Ecology Association Convention, June 19-21, 2009. [http://www.media-ecology.org/publications/MEA_proceedings/v10/index.html]

"Orality, Literacy, and Dialogue: Looking for the Origins of the Essay." Time, Memory, and the Verbal Arts: Essays on the thought of Walter Ong. Eds. Dennis Weeks and Jane Hoogestraat. Selingsgrove, PA: Susquehanna University Press, 1998.

"Community and Information Networks in Hypermedia Culture." The Bulletin of Science, Technology, and Society. 16.3 (1996). [Co-written with Robert A. Cropf.]

"At Hudsucker, the Future Is Now" (and So Is the Past): Precedent, Parody, Pastiche, and Homage in The Hudsucker Proxy." Paper presented at the Film and History Association Convention, November 21-24, 2013.

"Is Paris Burning? Textual and Cinematic Representations of the Liberation of Paris during World War II." Invited lecture for the Wednesday Club of St. Louis, February 2013.

" ‘Orality,' Literally: Re-Embodying the Voice as Oral Performance in the Writing Classroom." Paper presented at the Convention of the Conference on College Composition and Communication, March 2012.

Love and the "Tough-Talkin' Career Gal": Desire, Power, and the Figure of the "Hard-Boiled" Woman Journalist." Paper presented at the Film and History AssociationConference, October 2010.

"The Pen (or the Mic) Is Mightier: The Popular Columnist/Broadcaster as Obsessive/Aggressive Alpha Male." - Film and Literature Association Conference, October 2009.

"The Exact Location of the Voice: Walter Ong and the Embodiment of Discourse." Media Ecology Association Convention, June 2009.

"A Loss for Words: Sounding the Depth of What We Profess in College English." Creighton University Symposium "The Catholic Intellectual Tradition as a Source of Scholarly Wisdom," March 2009. [Invited lecture.]

"The Real Bodies Never Get into the Books: The Rhetoric of Representing the Dead in War Propaganda." - Paper presented at the Conference on College Composition and Communication Convention (CCCC), April 2008.

"Wars with Words: Rhetorical Strategies for the Justification of War." - Paper presented at the CCCC Convention, March 2006.

"‘The Virtual Town Hall': Cyberspace as an Extension of the Public Sphere." Paper presented at CCCC Convention, March 2002.

Screen Business: Hollywood's Representation of the Business World from the Depression to the Present. Scholarly study of how Hollywood has represented business throughout most of its history.

Has published and won awards for both literary nonfiction and poetry. Journals include The Examined Life, Natural Bridge, New Letters, Via, and The Iowa Journal of Literary Studies (see Awards, below).

2012 - "Golden Apple Award" for Excellence in Teaching, Advising, and Mentoring, from the English Graduate Organization.

2002 - Finch Award for Outstanding Mentoring - presented by the College of Arts and Sciences, Saint Louis University. 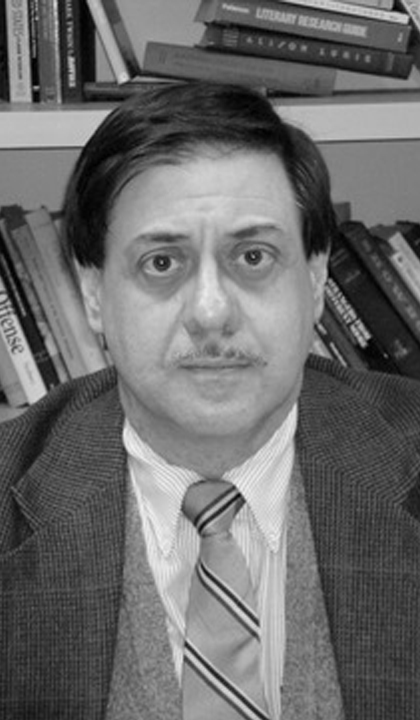