Method to Her Madness

Susan Moser suspected she had an actress on her hands when her 10-year-old daughter, Alicen, was the only child in the Muny Kids chorus who stayed in character during the entire performance of Joseph and the Amazing Technicolor Dreamcoat. 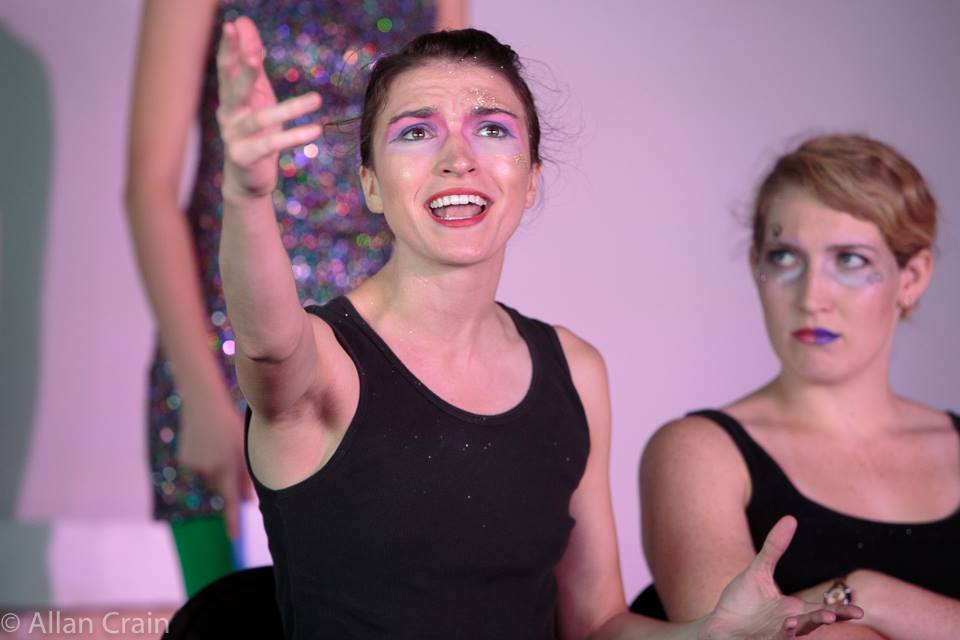 Alicen Moser during a performance.

Moser’s suspicions were confirmed two years later when Alicen covered for the adult lead who had forgotten her lines during a community college production of Wait Until Dark.

“Alicen kept her cool and it blew me away,” she said. “I knew then that this was her talent, this was her love.”

Flash forward a decade. Alicen Moser (A&S ’16) continues to impress her mother and audiences with her stage presence.

The St. Louis native majored in theater and English at SLU and is co-founder of the experimental theater company, Poor Monsters. Productions are comedic mash-ups of Shakespeare’s plays and contemporary, experimental or improvisational works. The productions highlight the experiences of women and gender minorities.

“I love being inspired by the classics and fitting them into modern structures and art forms,” she said.

Moser co-founded the company with two other SLU grads, Katy Keating, (A&S ’15) and Kristin Rion (A&S ’14). For the last two years, Poor Monsters has been invited to the St. Lou Fringe Festival, a week of eclectic, experimental performing arts pieces in Grand Center.

Moser also has been cast in several plays produced by other local theater companies. Though she feels her strength is comedy, she often is cast in dramatic roles, including her current role as a vicious teen “FAT,” a play that explores body image ideals.

Moser began acting in the third grade. Her first performance was a bit part in Miracle on 34th Street. The stage it turned out, was the one place the formally shy child felt at home.

“The stage was where I could confidently interact with the world,” Moser said. “I had a script, and I had my blocking, so I always knew I was doing and saying the right things. I figured as long as I knew my lines I was great. I was confident.”

When not on stage, Moser is the engagement manager for Metro Theater Company, a professional troupe that offers live performances and educational workshops for young audiences. Moser coordinates performances, helps schools acquire grants to bring shows to their students and assists with fundraising efforts. Moser’s goal on stage and off is to make theater as inclusive as possible.

“I think theater should be affordable and accessible to all, regardless of race, class, religion, gender or sexual orientation,” she said.

Connecting with the Audience

Moser credits SLU for providing her with experiences that helped her learn what it takes to be a professional actor. In addition to her campus production performances, a professor helped Moser land a part in The Foreigner at The Repertory Theatre of St. Louis during her freshman year. Another professor helped her get a job backstage at the St. Louis Shakespeare Festival.

“The professors don’t just teach, they’re involved in theater,” she said. “They are artists themselves, and their connections were invaluable. I feel I was better prepared for the real world of acting than peers who attended school elsewhere.”

As for the future, Moser hopes to become a member of “The Second City,” the famous improvisational theater troupe based in Chicago – and training ground for her role model, Tina Fey.