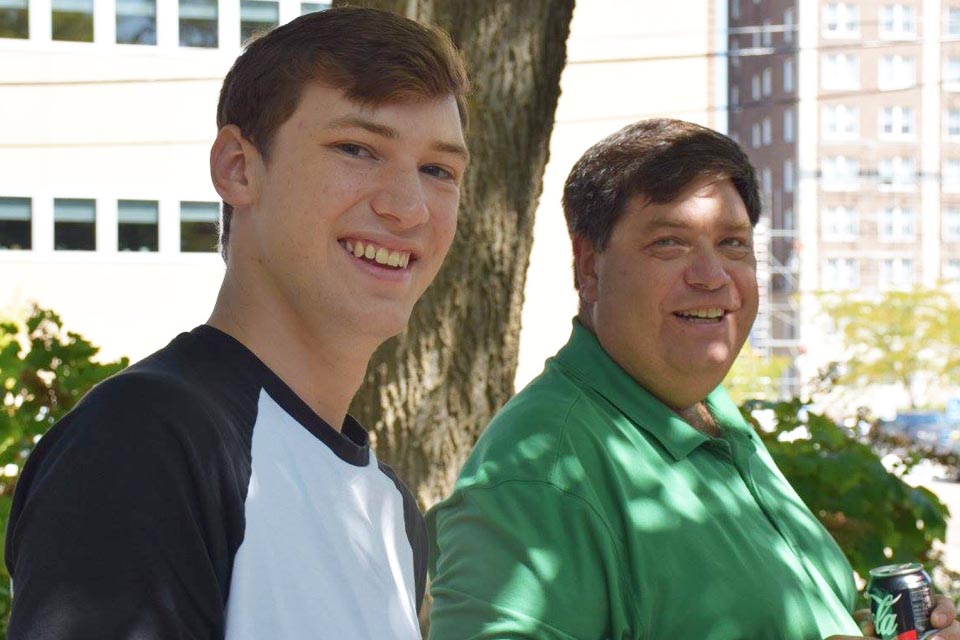 The Department of Political Science at Saint Louis University has detailed forms, procedures and resources that can help keep you on track toward your degree, support you as you present research at conferences and more.

There are a number of competitive national scholarships and fellowship which may be of interest to Saint Louis University political science students.

The initial phase of competition for some of these scholarships is managed at SLU by the Honors Program and internal deadlines may apply.

The Boren Awards, which include a variety of scholarships and fellowship opportunities, are awarded to students so they can study a foreign language in a different country. Countries in most of Western Europe, as well as Canada, Australia, and New Zealand are not covered by the scholarship. This is because students are encouraged to study a less commonly taught language in places such as Eastern Europe, Africa and the Middle East.

The Charles B. Rangel Fellowship has two programs, one for undergraduate students and one for graduate students. Both program are designed to attract and prepare outstanding young people for careers as diplomats in the U.S. Department of State. The undergraduate program is a summer fellowship where students learn about international affairs. The graduate program is a two-year scholarship program which provides funding towards master's degrees for students interested in a career in the Foreign Service.

The Coro Fellowship in Public Affairs develops the next generation of aspiring change makers. Today's complex urban environments present constantly evolving challenges and opportunities, creating an increasing need for leadership with the ability to forge connections and solve problems across all sectors. The nine-month program puts you in a variety of public affairs situations, requiring graduate-level thinking.

The Critical Language Scholarship (CLS) Program is a fully-funded overseas language and cultural immersion program for American undergraduate and graduate students. With the goal of broadening the base of Americans studying and mastering critical languages and building relationships between the people of the United States and other countries, CLS provides study opportunities to a diverse range of students from across the United States at every level of language learning.

The Fulbright U.S. Student Program includes multiple grants for students looking to study abroad. Students may apply as seniors or as graduate students. The Fulbright Program offers travel grants, research grants and a Fulbright-Clinton Fellowship, among others.

The George Mitchell Scholarship is granted to 12 students every year, from the age of 18 to 30 for one year of graduate study in Ireland or Northern Ireland. The scholarship covers tuition, living expenses and travel fees. The scholarship is given to students based on scholarship, leadership and a sustained commitment to community and public service.

The Marshall Scholarships are one- and two-year scholarships given to students looking to pursue graduate study in the United Kingdom. Students can select one of many United Kingdom institutions for their graduate work. The scholarship covers university fees, cost of living expenses, book fees, a thesis grant, research and daily travel fees, as well as fares to and from the United States.

The Princeton Emerging Scholars Program aims to increase the participation of students from underrepresented groups in Ph.D. programs in political science. The ESPS program provides students who have already earned a bachelor's degree the opportunity to explore their research interests and prepare for graduate school through intensive research, coursework and mentoring.

The Rhodes Scholarship is awarded to graduate students. Recipients of the highly regarded scholarship can attend the University of Oxford and study any program offered by the school for two years. Students are given a stipend to pay for housing and living expenses while they are in England.

The Scoville Peace Fellowship is a highly competitive program that provides recent college and graduate school alumni with the funding and opportunity to work with one of more than two dozen participating institutions in Washington, DC, including leading think tanks and advocacy groups focusing on international security issues.

The Truman Scholarship was created to encourage students to follow a career in public service. A better future relies on attracting to public service the commitment and sound judgment of bright, outstanding young leaders. Students should apply for this scholarship their junior year.

The Morris K. Udall Scholarship looks to promote leadership, education, collaboration and conflict resolution in the areas of environment, public lands and natural resources in order to strengthen Native nations, assist federal agencies and others to resolve environmental conflicts, and to encourage the continued use and appreciation of our nation's rich resources.

The College of Arts and Sciences annually presents the James D. Collins Awards for Excellence in Student Academic Achievement to recognize scholarship and creative achievements among undergraduate students. Faculty in the Department of Political Science select the most outstanding graduating senior based on academic achievement, co-curricular activities and an essay submitted to the department.

The Timothy Lomperis Award honors a former political science faculty member and is given annually to a graduating political science major who, like the award's namesake, demonstrates academic excellence, a consistent effort to exceed stated expectations, concern for the education of the whole person, engagement with issues of contemporary relevance, and a commitment to treat others with respect and cordiality. Faculty members select the winner based on the award criteria and an essay submitted to the department.

Outstanding Student in the M.P.A. Program

This award is given annually to the most outstanding student in the Master of  Public Administration program, as selected by that program’s faculty.

This conference is open to undergraduates and accepts papers from many disciplines, including political science.

This conference is open to undergraduate and graduate students. Papers on any topic related to government or politics are welcome, as are all subfields and political perspectives.

The annual Notre Dame Peace Conference explores the unique perspectives, backgrounds and experiences that each person and group bring to the process of peacebuilding. Notre Dame invites students interested in peace-related issues to submit papers, posters, discussions, workshops, or other presentations that represent work on peace and nonviolence.

Open to undergraduate and masters’-level students, this conference is an opportunity to present on research and internships relevant to the broad theme of social justice. You may present by reading a paper or using a poster.

The Political Round Table: Conversations That Matter is a student government chartered organization with the mission of exploring, comparing, and contrasting the opinions of the student body on important issues by opening free and equal dialogue.

It hosts large events twice monthly and regular coffee and conversations events. Everyone is welcome to join. You do not need to be a political science major.

Learn More About Political Round Table

SLU’s Department of Political Science sponsors the Epsilon Kappa Chapter of Pi Sigma Alpha, the national political science honor society. Membership is awarded annually to students who have completed at least 15 hours of political science classes. Candidates are selected strictly on the basis of outstanding achievement in political science and overall academic performance.

Pi Sigma Alpha was founded in 1920 and has chapters in major American universities. It publishes the Pi Sigma Alpha Undergraduate Journal of Politics for outstanding student papers.