When Maddy Joplin began her journey at SLU in 2018, she had no idea of the opportunities that awaited her. Not only would she go on to earn her dream internship, but she would also go on to start a meaningful organization for professional women at SLU called Aspire STL.

Not long after beginning classes at SLU, Joplin felt that the Chaifetz School was her second home.

After all, the picturesque B-School, a term affectionately coined by students for Cook Hall itself, is one of the many reasons Joplin chose to attend SLU.

“I remember it very vividly. It was April of 2018 and I was visiting SLU for the final time before making my college decision,” Joplin recounted.“My parents and I were driving down Lindell past the B-School and all the lights were shining and I thought to myself, ‘This is the prettiest building I’ve ever seen. I want to go to school here so badly.” 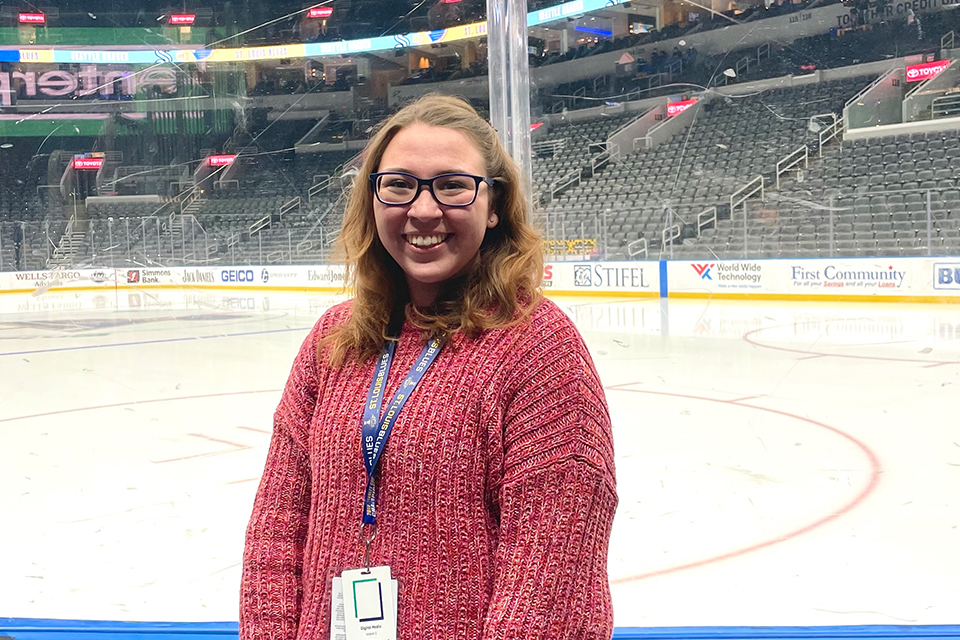 Maddy Joplin, a senior at the Chaifetz School studying marketing, is spending her senior year at SLU working as a social media intern with the St. Louis Blues.

And so she did. After taking numerous marketing and graphic design classes, all of Joplin’s hard work paid off in 2021 and she began to work as one of two social media interns for the St. Louis Blues. She began the position in October, the start of the National Hockey League season.

“I’d had my eyes on this internship since freshman year. So to finally have the internship, it’s been kind of like a dream come true,” Joplin stated.

With classes and resources that sought to aid her in her professional journey, Joplin was confident that the skills she learned in the Chaifetz School would prepare her well for the Blues internship.

“I don’t think I would be where I am today without my SLU education, especially my courses in graphic design and marketing. My internship is just applying everything I’ve learned so far,” Joplin said.

Her Brand Management class, taught by James Fisher, was just one example of the uniqueness and innovation the Chaifetz School has to offer. The class was taught entirely through case studies of different corporations.

“It felt so much more real-world than reading from a textbook,” Joplin said.

On top of being a hardworking intern, Joplin also co-founded an organization, Aspire STL, which is empowering women and minorities in business, and allowing those who have been marginalized in the business world to truly find their places.

“I am a woman in business and I belong right here,” Joplin stated confidently.

There’s no doubt that Joplin does belong in business. Her hard work and dedication, along with the support from Chaifetz School’s faculty and resources, have shaped her into the successful businesswoman she has become. After graduation, Joplin plans to continue her career in social media marketing and hopes to remain in the sports industry.

Reminiscing on her time at Chaifetz School, Joplin believes that the biggest lesson she’s had to learn through her successes is that she earned it all.

“Everything does happen for a reason,” Joplin said. “You get an internship for a reason. You’re at SLU for a reason. You are qualified and you deserve success. So, whatever you do, don’t doubt yourself and underestimate your true potential.”