Haley Anderson, a junior studying Entrepreneurship and Marketing with a minor in African American Studies, is using her knowledge to further a business idea that would help women feel more empowered and confident.

Anderson chose Saint Louis University because of the Entrepreneurship program at the Richard A. Chaifetz School of Business. The program focuses on teaching real-life business skills and how to turn ideas into concrete proposals and startups.

Anderson’s business idea is a size-inclusive denim jean line for women. Although the quest to find jeans that fit is well-known to many women, it has become an even greater problem as many brands now use their own sizing measurements for their clothing rather than the universal standard.

“I came up with the idea in the spring of 2020,” Anderson explained. “I personally have trouble with sizing on my own jeans and I know so many other people, specifically women, do too.” 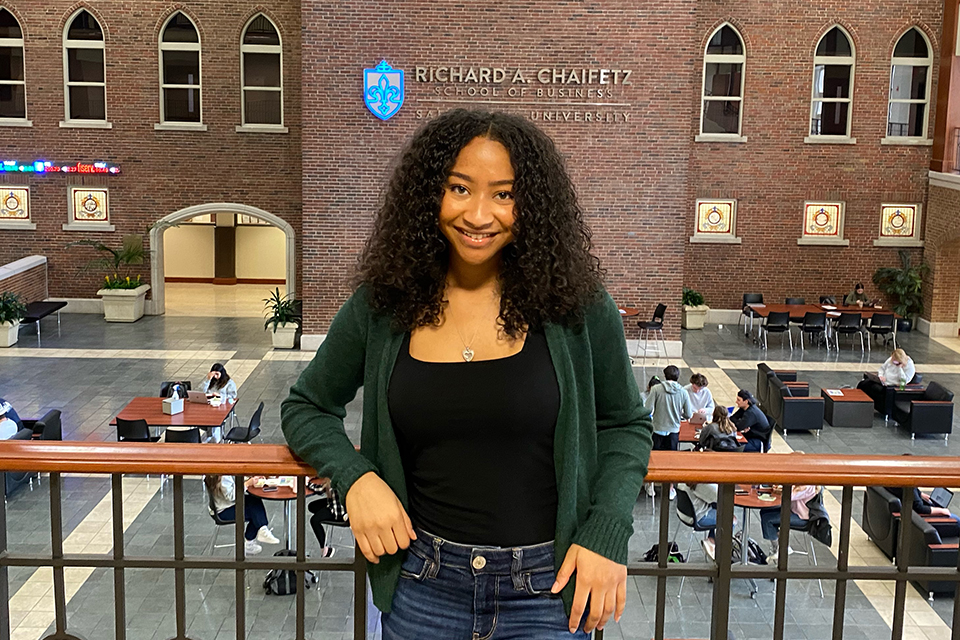 Haley Anderson, a junior at the Chaifetz School studying Entrepreneurship and Marketing with a minor in African American Studies, is developing a size-inclusive line of denim jeans for women.

The idea came to Anderson during her Ideas and Entrepreneurial Firms class taught by Dr.  Jintong Tang. Anderson began working with her project team in class and soon realized that her idea was not only feasible but had real potential for success.

“When I first met Haley, I was pleasantly surprised by her passion and perseverance for her entrepreneurial endeavors,” Dr. Tang said. “In my entrepreneurship class, Haley was the leader for the team feasibility project for her business idea to help women of shapes and sizes feel comfortable and beautiful in their jeans.”

The knowledge Anderson has gained through the Chaifetz School's curriculum and her African American Studies minor has combined to give her a comprehensive view of what it will take to become a successful entrepreneur.

“My minor helps me better understand where I am and my place in the world and understand others as I learn to connect with them,” Anderson said.

Citing several different business ideas that she’s contemplated since she came to SLU, Anderson knew that she wanted to help people who share her same identities and face obstacles because of those identities.

“It was challenging to have people understand the value of my ideas when they don’t completely understand who I am,” Anderson stated. “I do want to give sort of a shoutout, though, to the people and professors in the business school who have understood and helped me along the way.”

She began to grow more confident in herself and her ideas as she saw Black female representation within the Chaifetz School.

“As I got into higher-level classes, I saw professors that hold similar identities,” Anderson said  “Being able to see professors like Dr. (Toschia) Hogan and Dr. (Elouise) Mintz reminds me that I belong in the business world.”

This summer, Anderson will begin an internship at Deloitte, where she will work as an application and program analyst helping businesses decipher which software programs will be most profitable for them. She also plans to launch the electronic commerce site for her business during this time.

Learn More About Entrepreneurship at the Chaifetz School